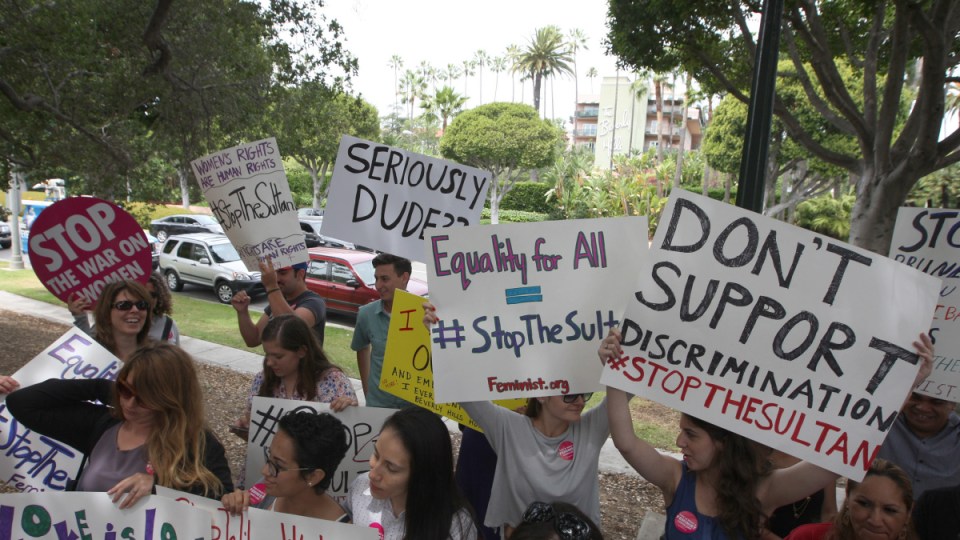 The draconian punishment of women and gay people announced by the Sultan of Brunei have been opposed since May 2014. Photo: Getty

Brunei’s introduction of the death penalty for gay people has put homophobic laws into the spotlight, as other countries ruled by strict Sharia law continue to threaten the safety of LGBTQI+ men and women.

As some states maintain a tight hold on regulations around sexual relationships, there are fears for the safety of unwitting foreigners who travel into zones where cruel punishments are enforced even for small acts of love like holding hands.

Experts and gay rights groups are warning Australians to be wary even when travelling on some aircraft.

It comes as barbaric laws which see gay people whipped or stoned to death came into effect in Brunei on Wednesday despite global criticism from politicians, human rights lawyers and celebrities such as Elton John and Ellen DeGeneres.

Tomorrow, the country of #Brunei will start stoning gay people to death. We need to do something now. Please boycott these hotels owned by the Sultan of Brunei. Raise your voices now. Spread the word. Rise up. pic.twitter.com/24KJsemPGH

It applies to Muslims, non-Muslims and foreigners even when on Brunei-registered aircraft and vessels, including Royal Brunei Airlines flights.

Victorian Gay and Lesbian Rights Lobby co-convenor Dale Park said he was deeply concerned about the practical implementation of the crackdown on gay travellers.

But the tiny South-East Asian country isn’t the only place where homosexuality is a crime punishable by death.

Alarmingly, people who are “guilty” of being gay or bisexual can be given the death penalty in 13 other countries.

In all countries except Syria and Iraq, the government has forbidden homosexuality under a radical interpretation of Sharia law.

This does not mean that the death penalty is always handed down when someone is found guilty of engaging in a same-sex act; only that the potential exists under Sharia courts.

In parts of war-torn Syria and Iraq, the death penalty is carried out by non-state actors, including the Islamic State.

Attitudes toward LGBTQI+ people are oppressive in other parts of the world, too.

Same-sex acts are a crime in 71 countries in total, according to the International Lesbian, Gay, Bisexual, Trans and Intersex Association.

In countries such as Kenya, Jamaica, Myanmar and Bangladesh, gay people can be jailed up for to 10 years.

In 2014, a 70-year-old British man was reportedly arrested and jailed for four months in Morocco for the crime of being gay.

Even in countries where homosexuality is technically legal, LGBTQI+ people are still subjected to varying degrees of discrimination.

In Russia, gay or transgender people can be detained, tortured, abused and bullied even though it is not classified as a crime.

Homophobia in Russia was made even worse in 2013 when President Vladimir Putin passed a ‘gay propaganda’ law, which bans children from accessing any type of media that shares information about the lives of gay people.

Meanwhile, Western and Latino countries have paved the way for LGBTQI+ rights around the world, with France, Belgium, the Netherlands, Brazil and Argentina decriminalising homosexuality well before 1900.

The Netherlands was the first country to legalise same-sex marriage in 2001, followed by Belgium in 2003 and Spain and Canada in 2005.

Australia followed suit more than a decade later after 62 per cent voted ‘Yes’ in the same-sex marriage postal vote in 2017.

University of Melbourne cultural studies lecturer Dr Hannah McCann said while Australia fared well compared to countries like Brunei, we still had a long way to go in terms of securing equal rights for LGBTQI+ people.

“Homophobia and the fight for LGBTQI+ rights are a contemporary reality in Australia,” Dr McCann said.

She pointed to “archaic laws” unearthed by the Ruddock review tabled in Parliament last year, which recommended schools should be able to expel LGBTQI+ teachers or students on the grounds of religious freedom.

Brunei isn’t the only country with brutal anti-LGBT laws