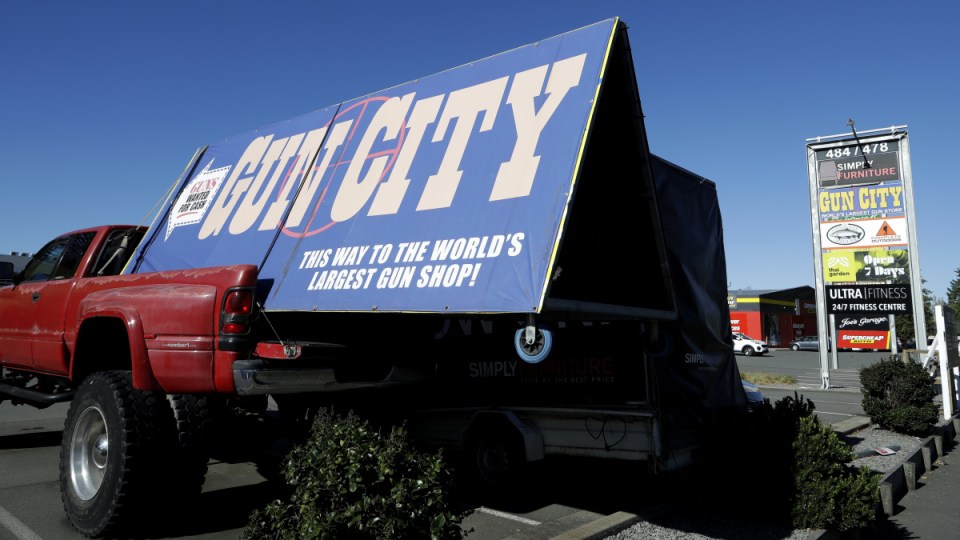 Advertising in Christchurch for a gun shop. Photo: AAP

New Zealand’s parliament has voted 119-1 to pass the first reading of a bill that bans military-style semi-automatic weapons and brings in a raft of new gun-related criminal offences.

It’s the government’s response to the mosque massacres of March 15 that left 50 Muslim worshippers dead, killed by a single attacker.

The legislation is being handled with unprecedented speed. Less than an hour after the vote, a parliamentary committee was being briefed by officials before hearing public submissions.

Police Minister Stuart Nash opened the first reading debate and set its tone, saying the terror attack had changed New Zealand, mosques were under guard and public safety was paramount.

“We don’t ever want to see an attack like this in our country again, we are compelled to act swiftly,” he said.

The opposition National Party strongly supports the bill. Police spokesman Chris Bishop said it would work with the government to get it into law quickly.

“Parliament hears the call of the public – they want action,” he said.

MPs from both sides spoke of the appalling killing power of semi-automatic weapons and said there was no place for them in New Zealand.

The bill also bans magazines and any parts that can be used to convert a rifle into a military-style semi-automatic. There are exemptions for .22 “rabbit guns” and small capacity shotguns.

The bill’s sole opponent was ACT leader David Seymour, his party’s only MP. He voted against it because he believes rushing it through parliament is wrong.

“Our role is to ensure laws are made properly with full scrutiny and public input,” he said.

“That isn’t made less important because gun law is critical – it is more important now than ever.”

Mr Seymour had earlier missed an opportunity to block a move by parliament to agree on a truncated process by consensus.

He could have forced the government to put parliament into urgency, but the measure was adopted while he was outside the debating chamber telling journalists what he was going to do.

The committee handling the bill must report it back by April 8 and the government intends passing it into law by the end of next week.

There will be an amnesty until the end of September for banned weapons to be handed in, and there will be a buy-back scheme.

Gun lobbyists stridently oppose the way it is being fast-tracked and say the legislation will have much wider effects than those intended.

Nicole McKee, secretary of the Council of Licensed Firearms Owners, said on Tuesday there were 250,000 licence holders and the law changes would make them criminals.

The gun lobby has previously managed to hold off proposed law reforms, but this time it has been rendered impotent by the huge momentum for change, inside and outside parliament.