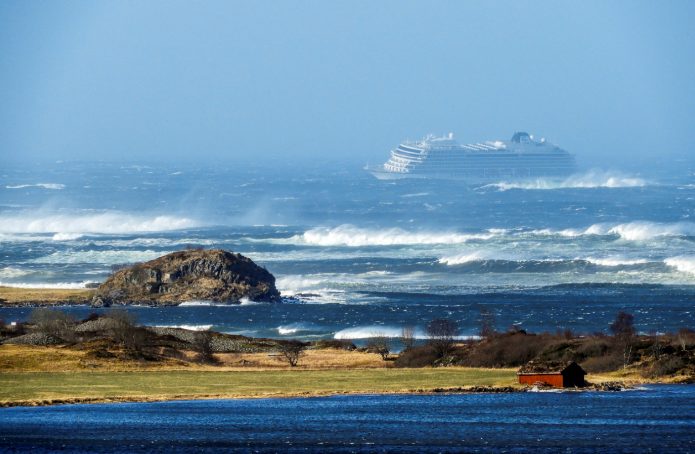 Tossed by relentless waves and dangerously close to a rocky and treacherous shore, the Viking Sky issued an immediate plea for help.

A dramatic rescue operation is under way in rough seas off western Norway where hundreds of passengers are being winched by helicopter from an ailing Viking Sky cruise ship.

Several helicopters are being used to rescue 1300 passengers and crew from the cruise ship, which suffered engine failure and is at risk of smashing into the rocky coast.

Helicopter video from the evacuation of 1,300 passengers from the Viking Sky cruise ship off the coast of Norway. The vessel has been able to restart one of the engines and is now anchored two kilometres from land. https://t.co/tUBm6A04pN pic.twitter.com/BzRDcX9fuJ

The Norwegian cruise ship has been anchored and the plan is for tugs to take it to calmer waters as people are being winched off one by one.

One passenger saying she was terrified by the buffeting of howling winds.

Rescue workers say it will take hours to evacuate all those on the cruise ship and 16 people are reported to be injured, of which three are seriously injured.

Nearly 230 people have been evacuated from the vessel, officials said.

They were being housed in an emergency centre in the town of Brynhallen, about 500 kilometres north of Oslo.

Police in the province of More og Romsdal, in the far north-west of Norway, said the Viking Sky sent out a distress signal on Saturday afternoon.

Broadcaster NRK showed footage of the Viking Sky being battered in heavy waves not far from a rocky stretch of coastline known as Hustadvika.

Several helicopters and vessels were aiding in the evacuation of those on board, the Norwegian maritime rescue service said.

The rescue operation hit a snag when a cargo ship that was coming to the aid of the Viking Sky also experienced engine problems, leaving it stranded in the same area at the cruise ship.

Two helicopters had to be diverted to the freighter to evacuate its nine crew members, police and Norwegian media reported.

The cargo ship Hagland Captain was also plagued with engine problems as it was coming to the rescue of the Viking Sky.