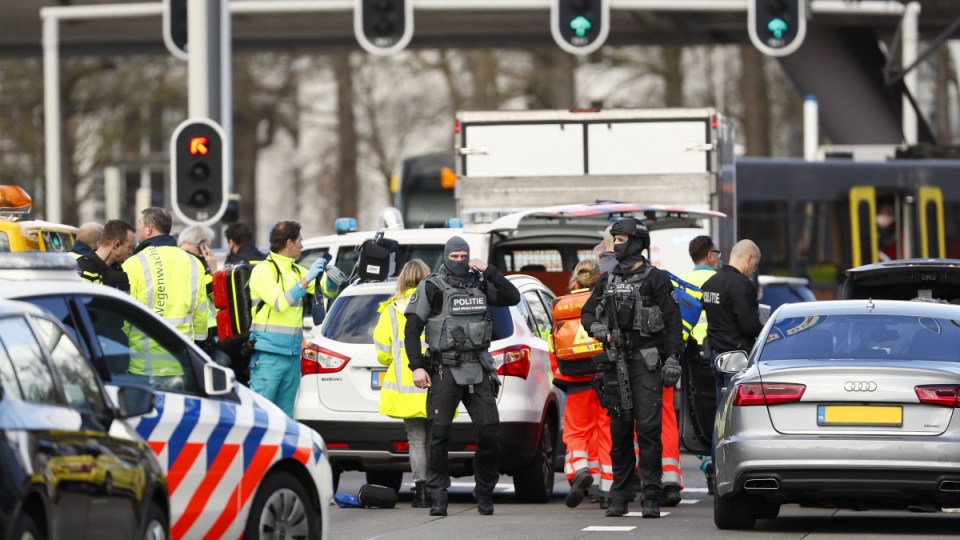 Police cordon off the area near the shooting on a tram in the Dutch city of Utrecht on Monday. Photo: AFP/Getty

Dutch police have arrested a man suspected of killing at least three people and wounding five others during a shooting in the city of Utrecht.

The suspect, identified by police as Turkish-born Gokmen Tanis, was apprehended Tuesday morning after an eight-hour manhunt.

Dutch authorities earlier raised the terrorism threat to its highest level in Utrecht province after the shooting, which is believed to have taken place on a busy tram.

Schools were told to shut their doors and paramilitary police increased security at airports and other vital infrastructure, as well as the city’s mosques.

The threat level was downgraded from level five readiness to a level four following the alleged shooter’s arrest.

Utrecht mayor Jan van Zanen said a terror motive was assumed, but Mr Rutte did not speculate on the gunman’s motivation.

“Our country today has been jolted by an attack in Utrecht,” the Prime Minister said in a statement.

“Several shots were fired in a tram and several people were injured,” Utrecht police spokesman Joost Lanshage said shortly after the shooting at around 10.45am local time.

Turkey’s official Anadolu news agency said the suspect’s relatives believe he shot at someone close to the family due to “family issues”.

Police earlier issued an image of Tanis and urged the public not to approach him, but to call the police emergency line.

“We cannot exclude, even stronger, we assume a terror motive. Likely there is one attacker, but there could be more,” Mr van Zanen said.

Lifeliner Nederland also tweeted that its trauma helicopters Lifeliner1, Lifeliner2 and Lifeliner3 had been deployed for a shooting incident in a tram.

The suspect had previous run-ins with law enforcement and had been arrested before, regional prosecutor Rutger Jeuken said without giving further details.

The shooting took place in a quiet residential district on the outskirts of Utrecht with a large immigrant population.

Witness Daan Molenaar, who was on the tram, told national broadcaster NOS he did not believe it was a terrorist attack.

“The first thing I thought was, this is some kind of revenge or something, or somebody who’s really mad and grabbed a pistol,” he said.

Dutch television showed counter-terrorism units surrounding a house in Utrecht and sniffer dogs being put to work during the manhunt.

The university city in the central Netherlands, which is the nation’s fourth largest city, has been a religious centre for centuries. It is known for its medieval old town, canals and Christian monuments.