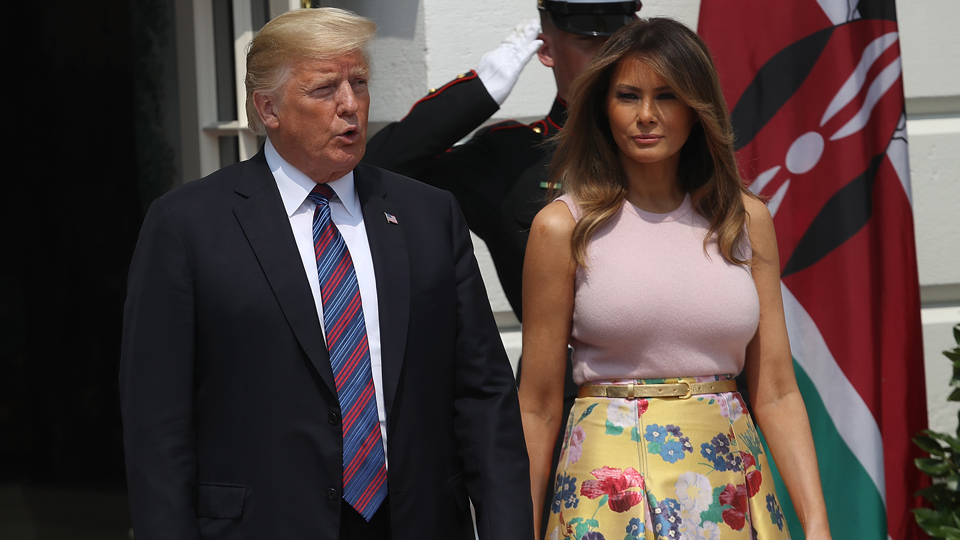 The President and first lady have dismissed speculation of a Melania body double. Photo: Getty

Donald Trump has angrily accused media outlets of doctoring photographs of his wife amid growing speculation that the US President was accompanied by a fake Melania Trump during an official visit.

Conspiracy theories have circulated on social media over photographs under the hashtag #fakeMelania that claim a look-alike first lady traveled with Mr Trump to Alabama last week to survey tornado damage.

In a furious Twitter post late Wednesday, Mr Trump blamed “fake news” for altering the photos, saying the media “are only getting more deranged with time!”

The Fake News photoshopped pictures of Melania, then propelled conspiracy theories that it’s actually not her by my side in Alabama and other places. They are only getting more deranged with time!

Mr Trump offered no evidence to support his claim that the images had been altered, a practice that would be a major ethical breach by media outlets.

Twitter users have posted side-by-side photos and videos of Melania Trump from the Alabama trip, scrutinising the first lady’s body language, height and facial structure that they claim supported the body double theory.

Commentators on US ABC’s panel show The View this week noted that the woman with the President on the trip looked shorter than usual in photos.

Melania Trump reportedly opted for running shoes rather than her usual high heels during the visit.

When you order something online vs when it arrives… #FakeMelania pic.twitter.com/G1JBYsDzMD

The View speculation was dismissed by Melania Trump’s spokeswoman, Stephanie Grisham, who said it was “shameful” that the talk show’s hosts, which include the daughter of MrTrump’s ambassador to Russia, chose to “laugh in the face of tragedy” in regards to the couple’s trip.

.@flotus & @potus traveled to Alabama to pay their respects & comfort victims of the tornado devastation. In typical fashion, @theview chooses to laugh in the face of tragedy. Shameful. https://t.co/KzG2c4Th4a

The idea that the President would use a stand-in for his wife is not new and previous conspiracy theories have been fuelled by speculation the couple’s marriage was in difficulty over accusations of infidelity against Mr Trump.