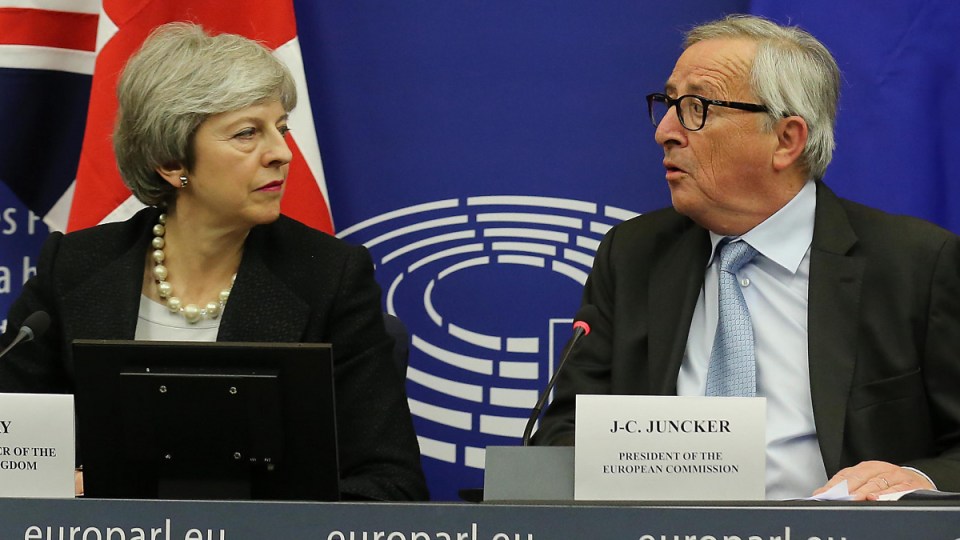 British Prime Minister Theresa May has won legally binding Brexit assurances from the European Union in a last-ditch attempt to settle a deal for Britain’s departure from the EU.

With the March 29 Brexit deadline just days away, Mrs May rushed to Strasbourg on Monday to try to strike a deal with European Commission President Jean-Claude Juncker.

She and Mr Juncker appeared at a late-night media conference in the French city, home of the European Parliament, to announce they had agreed on legal changes to cover Britain’s exit from the EU.

“Now is the time to come together to back this improved Brexit deal and to deliver on the instruction of the British people,” Mrs May said.

Mrs May announced three documents – a joint instrument, a joint statement and a unilateral declaration – that she said were aimed at resolving the most contentious part of the divorce deal she agreed in November – the Irish backstop.

The backstop is an insurance policy aimed at avoiding controls on the sensitive border between the British province of Northern Ireland and EU member Ireland.

It maintains the customs union with the EU until a permanent trading relationship can be developed. This avoids the need for a hard border between Ireland and Northern Ireland.

It was not clear if the assurances she had agreed will be enough to win over the 116 additional MPs she needs to convince to reverse the crushing defeat her Brexit proposal suffered on January 15.

Mrs May faces a crucial vote in London on Tuesday (British time), at which her party must either approve the new deal or head to a chaotic “no deal” Brexit.

Mr Juncker said he had agreed to the additional assurances on Monday. But he has warned Britain it will not get a third chance to endorse a deal.

“It’s this deal or Brexit might not happen at all.”

However, some British politicians worry Mrs May’s deal could trap Britain in the EU’s orbit indefinitely.

British Opposition Leader Jeremy Corbyn told the BBC that Mrs May’s  negotiations had “failed” and the announcements did not contain “anything approaching the changes” she had promised Parliament.

He urged MPs to vote against the deal on Tuesday.

“Since her Brexit deal was so overwhelmingly rejected, the Prime Minister has recklessly run down the clock, failed to effectively negotiate with the EU and refused to find common ground for a deal Parliament could support,” he said.

On news of the breakthrough, the British pound, which has see-sawed on Brexit headlines, jumped 0.8 per cent to $1.3250 in Asian trade and rallied to the strongest against the euro since mid-2017.