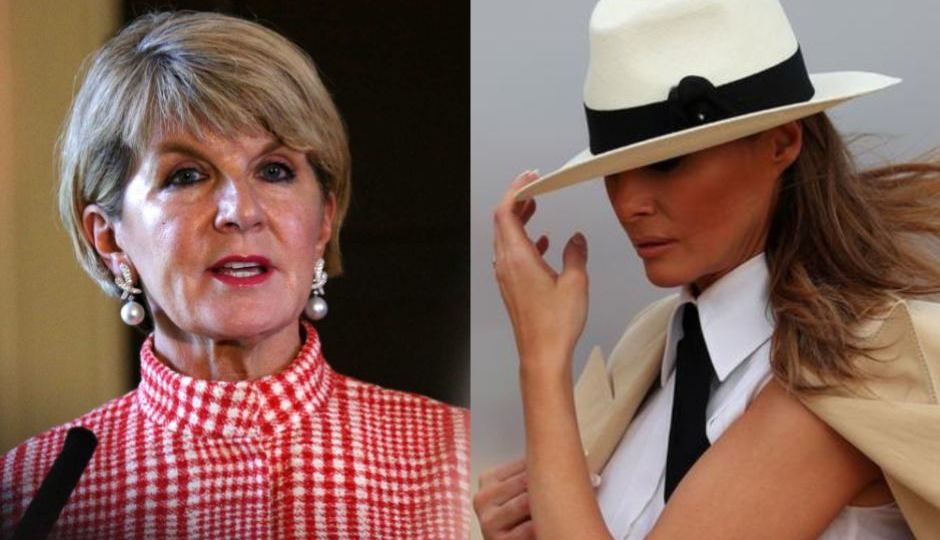 Bishop told the Adelaide Festival that Melania Trump assumed she was the wife of the foreign minister. Photo: Reuters

Julie Bishop’s partner, David Panton, was once assumed to be the foreign minister of Australia by United States first lady Melania Trump.

Ms Bishop, the first woman to serve as Australian foreign minister, told a lunchtime audience at the Adelaide Festival yesterday that she and Marise Payne, herself at the time Australia’s first female defence minister, regularly drew stares and disbelief as a rare female duo at the international security summits the pair attended together.

“People were quite surprised. They didn’t think that that’s what Australia would have … they thought we were a blokey culture,” she said.

But in 2017, when US President Donald Trump made his first appearance at the United Nations General Assembly Leaders’ Week, matters took a turn for the absurd.

“All the kings and queens and monarchs and heads of state and prime ministers and foreign ministers are in New York for that one week,” Ms Bishop said.

“President Trump made his speech at the General Assembly and it was highly controversial.

“I was introduced to him afterwards and it was all ‘what did you think of my speech, what do you think of me,’ you know, ‘how am I going’ and later that night, David and I attended a cocktail function hosted by the President and the first lady.

“So David responded and called him Donald, which I thought was fabulous because I was obsequiously calling him Mr President.

“Melania, standing by, assumed David was the foreign minister and she said to me: ‘Julie, will you be coming to my ladies’ lunch tomorrow?’

“So this went on for a while until the President explained that I was the foreign minister.”

Ms Bishop drew an appreciative cheer from the crowd when she concluded her story: “David attended the partners’ lunch,” she said, and there was further laughter when she added that Mr Trump had observed with a degree of concern that Mr Panton was a good-looking guy.

Ms Bishop, over her career as foreign minister, regularly found herself to be the only woman in the room; not least in her own cabinet in 2013, under the prime ministership of Tony Abbott.

At the time, Ms Bishop defended the constitution of the cabinet.

On the inside, however, she reported on Saturday that her thoughts were:

“This isn’t fine. This is not completely normal.

“I recall a conversation very clearly where we were sitting around talking about appointments to cabinet after we had won the election and I had a number of names I was very keen to promote and for some reason when the final decision was made, I was the only woman in cabinet and that disturbed me for many reasons.”

Ms Bishop said the most upsetting element was that as deputy leader she was automatically in cabinet; Mr Abbott had, essentially, appointed no women at all.

Asked to comment on Mr Abbott’s announcement last week that he had changed his mind again and now supported Australia’s inclusion in the Paris Accord, Ms Bishop said with some asperity: “Tony will always have Paris.”