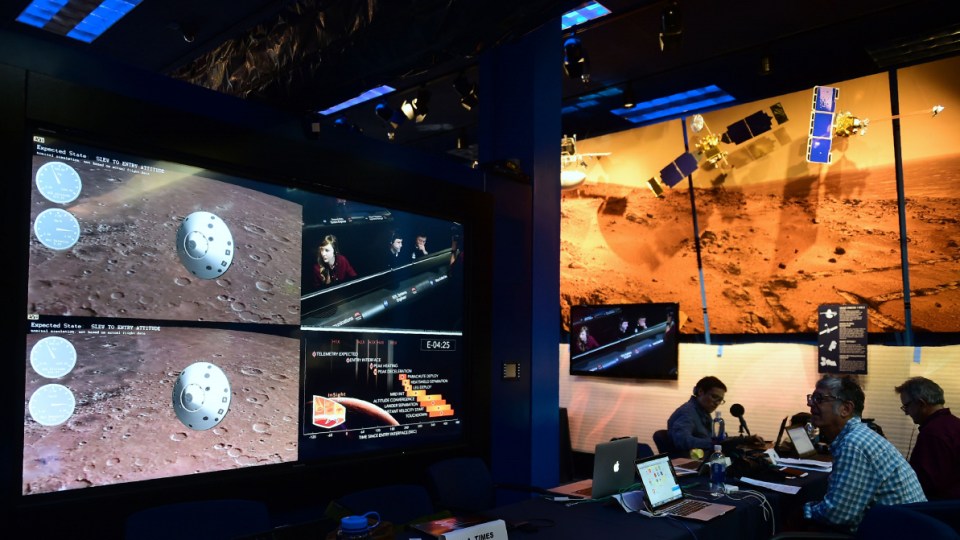 NASA’s Mars InSight mission has hit a snag: its heat probe appears to have struck an obstacle just below the surface of the red planet.

The instrument, which was designed to hammer itself 4.9 metres underground, encountered some kind of resistance over the weekend and hasn’t made progress since.

“The team has therefore decided to pause the hammering for about two weeks to allow the situation to be analysed more closely and jointly come up with strategies for overcoming the obstacle,” Tilman Spohn, the principal investigator for the heat probe, wrote Tuesday in the mission logbook.

The Heat Flow and Physical Properties Package, or HP3, was successfully deployed by the lander’s mechanical arm on February 12.

Its mission is to measure heat escaping from Mars’s interior, which will give scientists clues about the planet’s composition and history.

Engineers at the Jet Propulsion Laboratory in California, first tried last week to fire up the probe but the command failed to reach the Mars Odyssey orbiter, which was supposed to pass it on to InSight.

After two days of delay, the boring got underway last Thursday. The mole punched out of its housing and into the Martian soil, making quick progress during the first five minutes.

Then something changed. The mole continued hammering for four more hours, but it couldn’t go much deeper. In addition, it is now pitched to one side, leaning about 15 degrees off vertical.

Mission scientists estimate the probe has reached a depth of about a foot, meaning one end of the 16-inch mole is still sticking out of the ground.

“We are a bit worried,” Spohn wrote in the logbook, “but tend to be optimistic.”

The most likely explanation for the holdup is that the probe has hit a buried boulder or a layer of gravel.

Scientists picked InSight’s landing spot because it appeared to be soft and sandy. However, they were aware that something like this was a possibility.

Not all is lost, however. The probe itself still works fine, and researchers will take advantage of the break to collect the first round of data.

The mole will measure how quickly a pulse of heat spreads through the Martian soil.

It will also track changes in surface temperature when the moon Phobos passes overhead this week, eclipsing the sun and casting a shadow over the rusty surface.