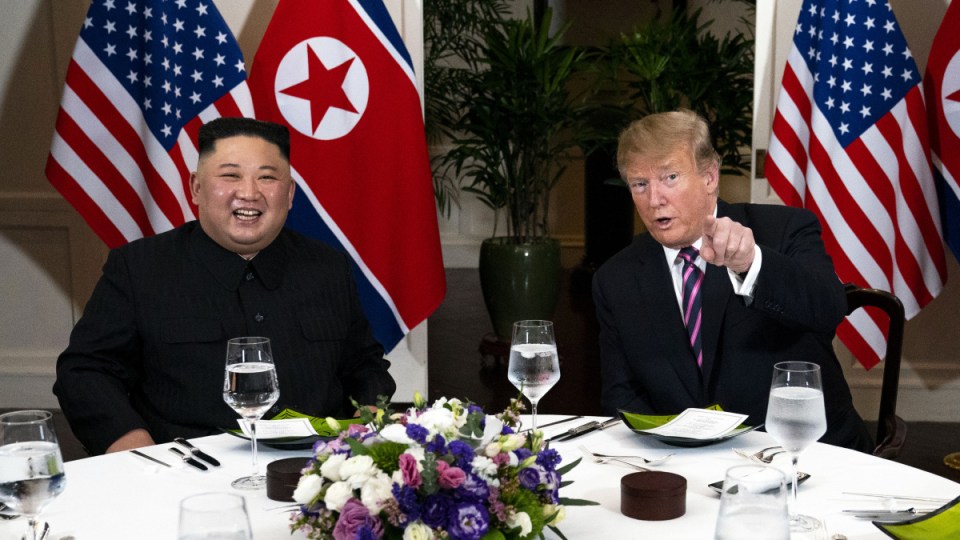 The summit opened in genial spirits with a dinner. Photo: New York Times

President Donald Trump and Kim Jong-un, North Korea’s leader, abruptly ended their second summit meeting on Thursday when negotiations collapsed after the two sides failed to agree on even the first steps toward nuclear disarmament, a peace declaration or reducing sanctions on the North.

“It was about the sanctions,” Trump said at an afternoon news conference in Hanoi, Vietnam, referring to Kim’s demand that the United States lift harsh economic sanctions imposed on North Korea with the approval of the United Nations.

“Basically they wanted the sanctions lifted in their entirety, but we couldn’t do that.”

“We had to walk away from that particular suggestion,” he added.

The premature end to the negotiations means the diplomacy between the United States and North Korea that has gone on for most of a year remains stalled, even as experts say North Korea continues to produce fissile material to make nuclear warheads.

It also undermines the image Trump has long cultivated of himself as a tough negotiator who can bring adversaries into a deal.

Trump said that Kim had agreed to take an important step toward dismantling a central part of his nuclear program – the Yongbyon enrichment facility – but that Kim said he would do so only if all sanctions were lifted.

The president and Secretary of State Mike Pompeo said the North would have to dismantle other weapons systems before all sanctions were lifted.

They added that the two sides would continue negotiations in other settings and stressed that there are nuclear sites the Americans are aware of but that are unknown to the public.

In response to a question, Trump also acknowledged that his administration was aware of a second enrichment site other than Yongbyon.

Trump had flown across the world to try to work face to face with Kim for the second time on the signature diplomatic initiative of his presidency, an effort to reduce what US officials regard as one of the world’s foremost nuclear threats.

Experts estimate that the North has 30 to 60 nuclear warheads and possibly a ballistic missile that can hit the continental United States.

If, as Trump said, Kim insisted that the United States lift all economic sanctions in exchange for just the dismantlement of Yongbyon, that was a severe misreading of US strategy.

US officials have said that the sanctions are their main leverage with North Korea and that keeping them tight is critical to the goal of full denuclearisation.

There was talk before Thursday that the Americans might allow more economic exchange between South Korea and the North as part of a deal, but that probably would have been as far as alleviation of the sanctions would have gone at this point.

The collapse of the talks came in the shadow of withering congressional testimony in Washington by Michael Cohen, Trump’s former lawyer, who spent hours on Wednesday describing Trump’s lies and deep character flaws.

"He lied a lot… but he only went about 95% instead of 100" – US President Donald Trump responds to ex-lawyer Michael Cohen's testimony saying he was "impressed" he said there was no Russia collusionhttps://t.co/CbibiArgBi pic.twitter.com/2Fz9uhOZy3

Asked at the news conference about Cohen, Trump said, “He lied a lot.”

“I think having a fake hearing like that and having it in the middle of this very important summit is really a very terrible thing,” Trump said, alluding to his earlier criticism that the hearing had been organised for partisan purposes by the Democratic-controlled House of Representatives.

Trump said that Cohen had indicated in testimony that he did not know of any collusion between Trump and the Russian government.

After the talks with Kim collapsed and before Trump spoke to reporters, the White House issued a statement saying that Trump and Kim had “discussed various ways to advance denuclearisation and economic driven concepts,” and that they had had “very good and constructive meetings,” but that no agreement had been reached.

Officials from both sides had hoped the Hanoi summit meeting would produce more concrete results than the vague communiqué issued by the two leaders after their first meeting last June, in Singapore.

Back then, they said they would work on four points: Improving relations, establishing a “lasting and stable peace regime” on the Korean Peninsula, affirming that Pyongyang would work toward “complete denuclearisation” of the peninsula, and carrying out the mutual return of remains from soldiers killed in the Korean War.

Since then, US national security officials have emphasised that denuclearisation was their most important goal, while North Korea has pushed for improving relations with both the United States and South Korea first.

The administration of President Moon Jae-in of South Korea appears to have agreed with Kim that establishing a more stable peace is the first priority, and it has been moving much faster than the United States in opening up diplomatically to the North.

The collapse of the talks was a stark departure from the earlier mood of the two-day gathering. On Thursday morning, Trump and Kim kicked off the day by meeting one on one at the Metropole hotel, where they had had an intimate dinner the previous night.

From the start, Trump emphasised that getting North Korea to dismantle its nuclear weapons program could be a lengthy effort and that it would be coupled with attempts to integrate the isolated nation into the global economy.

THANK YOU to our generous hosts in Hanoi this week: President Trong, Prime Minister Phuc, and the wonderful people of Vietnam! pic.twitter.com/AMqF0dfRhP

And before the collapse of Thursday’s talks, Trump was cautioning patience.

“I’ve been saying very much from the beginning that speed is not that important to me,” Trump said at the beginning of Thursday’s meetings. “I very much appreciate no testing of nuclear rockets, missiles.”

North Korea last conducted a nuclear test in September 2017 and a ballistic missile test in November 2017.

The message from the morning seemed clear – that integrating North Korea into the global economy would help moderate the country’s behaviour and bring it closer to the US orbit.

Trump appeared ready to gamble that as long as Kim and other North Korean officials rid themselves of any intent to harm the United States, they could keep their nuclear capability for a while.

Kim, when asked by a US reporter whether he was ready to denuclearise, said, “If I’m not willing to do that, I wouldn’t be here right now.” To which Trump replied, “That might be the best answer you’ve ever heard.” Kim also suggested he would accept an US liaison office in his country.