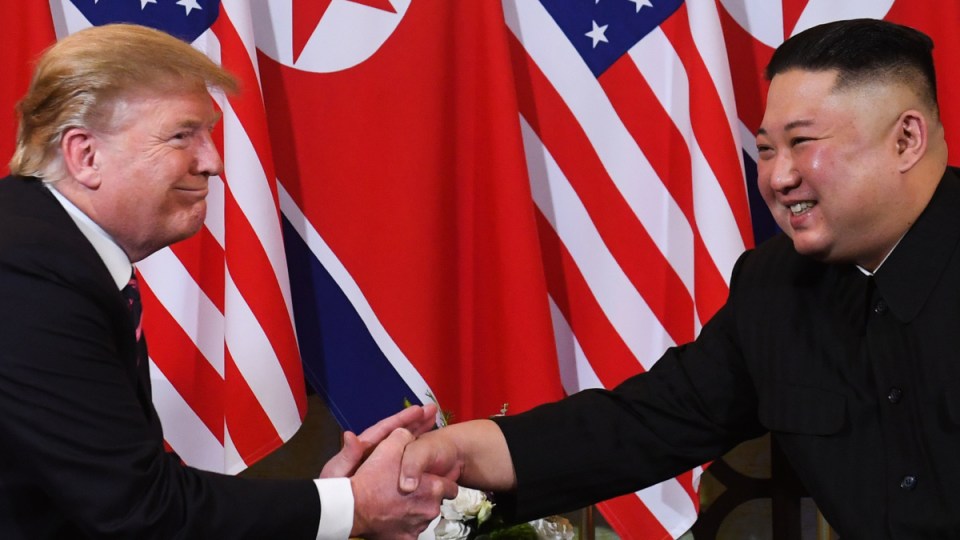 US President Donald Trump and North Korean leader Kim Jong-un cut short their summit in Vietnam on Thursday night after failing to reach an agreement in their nuclear negotiations.

Both had expressed hope for progress in their talks in the Vietnamese capital of Hanoi, but they left the summit venue far earlier than planned without signing a joint agreement.

Outlining there were differences in their visions of denuclearisation, Mr Trump said Mr Kim had wanted a lifting of all United Nations and US sanctions but it “wasn’t appropriate to sign an agreement”.

“Basically, they wanted the sanctions lifted in their entirety, but we couldn’t do that … we had to walk away from it,” Mr Trump told reporters.

"There were several options but this time we decided not to do any of the options. Sometimes you have to walk"

US President Donald Trump on the breakdown of talks with North Korean leader Kim Jong-un in Vietnam#Hanoisummit latest: https://t.co/CbibiArgBi pic.twitter.com/oRdgdjJNtC

“Sometimes you have to walk, and this was one of those times.”

The US was demanding that North Korea give up all of its nuclear and missile programs, while North Korea wanted to see the removal of a US nuclear umbrella for its Asian allies such as South Korea and Japan.

North Korea has conducted no nuclear or intercontinental ballistic missile tests since late 2017.

Mr Trump said Chairman Kim was willing to give up some of his country’s nuclear sites “but not the ones we wanted”.

“We couldn’t give up all sanctions for that,” he said.

"There will be no more testing of rockets and nuclear. I trust him and take him at his word"

Of Chairman Kim, an optimistic Mr Trump said:  “I trust him and take him at his word”.

“He has a certain vision – it’s not exactly our vision but it’s closer than what it was 12 months ago.

“You always have to be prepared to walk – I’d much rather do it [reach an agreement] right than do it fast.”

President @realDonaldTrump and @StateDept @SecPompeo sits with Kim Jong Un, Chairman of the State Affairs Commission of the Democratic People’s Republic of Korea for a second day of talks in Hanoi, Vietnam. #HanoiSummit pic.twitter.com/TJiNmdAHFm

Earlier, Mr Kim and Mr Trump, seated across from each other at a conference table, had appeared confident of progress.

“If I’m not willing to do that, I won’t be here right now,” Mr Kim told reporters through an interpreter, when asked if he was ready to give up his nuclear weapons.

In response, Mr Trump said: “That might be the best answer you’ve ever heard.”

Speaking shortly before leaving for Washington DC, Mr Trump said the next meeting between he and Mr Kim “might not be for a long time”.

“No agreement was reached at this time, but their respective teams look forward to meeting in the future,” she said.