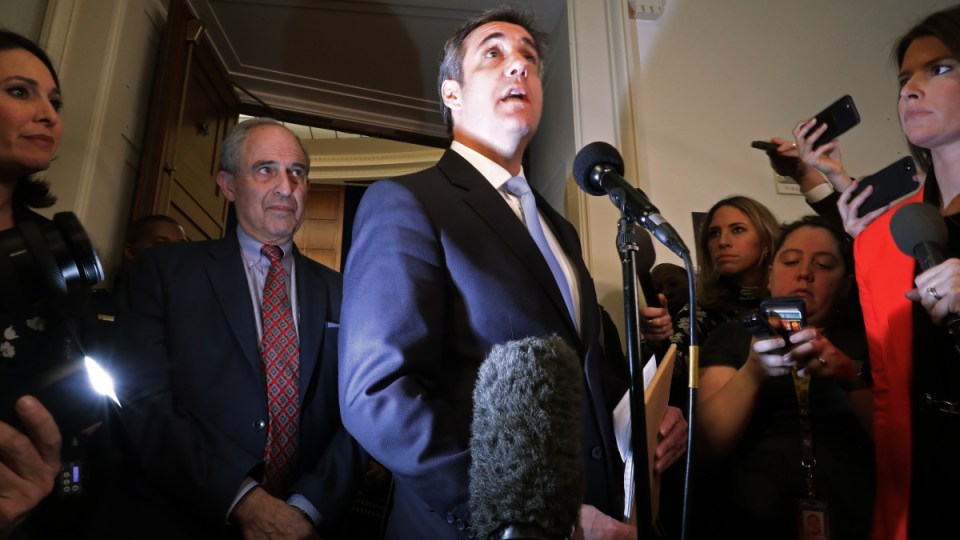 In the wake of testimony to congress by Donald Trump’s former lawyer, Michael Cohen, the chairman of the US House Oversight Committee said it “appears” the US president committed a crime.

But Democratic Chairman Elijah Cummings declined to say whether Mr Trump should be removed from office as a result.

“It appears he did,” Mr Cummings told reporters when asked after a day-long hearing with Mr Cohen if he believed Trump committed a crime as president.

“(But) that’s not for me to say. That’s based on what’s already been found.”

Mr Cummings was referring to the fact Mr Cohen had admitted to breaking campaign finance laws at Mr Trump’s direction in a guilty plea last year.

However, Mr Cummings declined to say whether he thought Mr Trump had committed impeachable offences.

“I need to study the transcripts and see what we have,” he said.

“Keep in mind I want to proceed very cautiously”.

Earlier Mr Cohen had revealed that he was working with federal prosecutors when asked if he was aware of other wrongdoing or illegal acts commited by Mr Trump.

“Yes, and again those are part of the investigation that is currently being looked at by the Southern District of New York,” Mr Cohen said.

“I am currently working with them on several other … investigations.”

Mr Trump tweeted his displeasure of Mr Cohen’s evidence from Vietnam where he is engaged in the US-North Korea summit.

Mr Cohen told the House of Representatives Oversight Committee that his former client did not want to release his tax returns before the 2016 election because he feared public scrutiny would lead to an audit.

“What he didn’t want is to have an entire group of think tanks that are tax experts run through his tax return and start ripping it to pieces, and then he’ll end up in an audit and he’ll ultimately have taxable consequences,” he said.

Mr Trump broke with decades of tradition for US presidential candidates by refusing to release his income tax filings during the campaign. He has said he won’t release them because he is being audited.

Mr Cohen claimed to have asked Mr Trump for paperwork about the audit to prepare Mr Trump’s response to reporters about the issue, but never received the documentation.

Mr Cohen also warned Republicans in Congress against defending a president he had protected for years, saying they also risked a fall from grace.

He is due to begin a three-year sentence in May for lying to Congress, tax evasion, bank fraud and campaign finance violations. The sentence was reached in a plea agreement with Robert Mueller, the special counsel investigating the Trump campaign for possible collusion with Russia.

“I’m responsible for your silliness because I did the same thing that you’re doing now for 10 years,” Mr Cohen said.

The more people that follow Mr Trump as I did, blindly, are going to suffer the same consequences that I’m suffering.”

The president’s former lawyer cast Mr Trump as a racist and conman who lied about his business interests in Russia throughout 2016 campaign.

Mr Cohen claimed Mr Trump had advance knowledge and embraced the news that emails damaging to Democrat candidate Hillary Clinton would be released.

But he also said he has no “direct evidence” that the Trump presidential campaign colluded with Russia.

“Everybody’s job at the Trump organisation is to protect Mr Trump. Everyday, most of us knew we were coming in and we were going to lie for him on something.

“And that became the norm, and that’s exactly what’s happening right now in this country.”