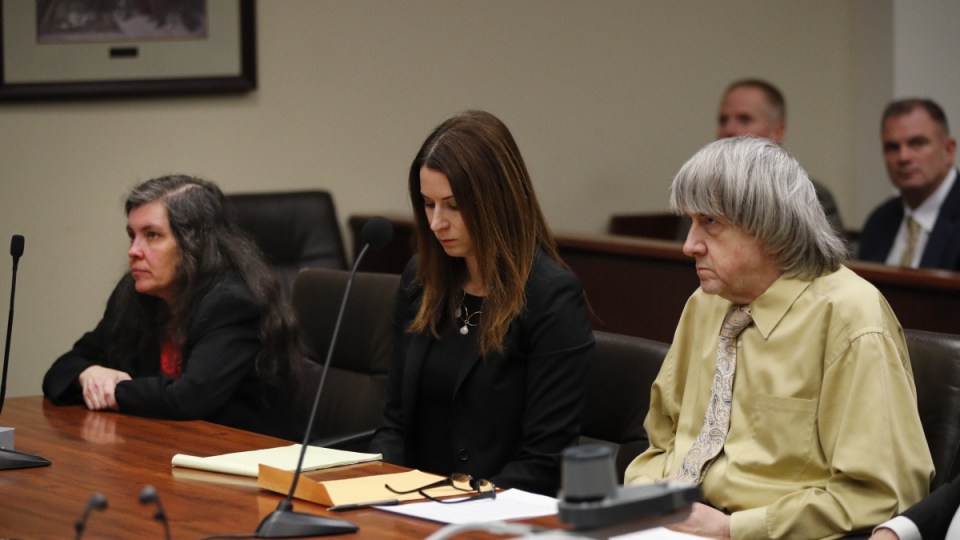 Louise and David Turpin with attorney Allison Lowe (centre) during a courtroom hearing on Saturday (AEDT) in Riverside. Photo: AAP

A California couple has pleaded guilty to torture and years of abuse that included shackling some of their 13 children to beds and starving them to the point they stopped growing.

David and Louise Turpin will spend at least 25 years in prison after entering the pleas in Riverside County Superior Court to 14 counts that included cruelty toward all but their toddler daughter, and imprisoning the children in a house that appeared neatly kept outside, but festered with filth and reeked of human waste.

The couple was arrested in January 2018 after their 17-year-old daughter escaped from the home and called 911 in the city of Perris, about 96 kilometres southeast of Los Angeles.

The children, ages 2 to 29 at the time, were severely underweight and hadn’t bathed for months.

They described being beaten, starved and put in cages.

Louise Turpin’s face turned red and she began crying and dabbed her eyes with a tissue during the hearing while her husband appeared stoic.

Riverside District Attorney Mike Hestrin said the pair will be sentenced to up to life in prison on April 19.

“The defendants ruined lives so I think it’s just and fair that the sentence be equivalent to first-degree murder,” Mr Hestrin said.

The Turpins had led a mostly solitary, but seemingly unremarkable life until the teenager jumped from a window and called for help.

David Turpin, 57, had worked as an engineer for both Lockheed Martin and Northrop Grumman.

Louise Turpin, 50, was listed as a housewife in a 2011 bankruptcy filing.

The family led a nocturnal existence, which kept them largely out of sight from neighbours in a middle-class subdivision.

In a recording of the 911 call, the girl who escaped said two younger sisters and a brother were chained to beds and she couldn’t take it.

“They will wake up at night and they will start crying and they wanted me to call somebody,” she said in a high-pitched voice.

“I wanted to call y’all so y’all can help my sisters.”

Police who responded discovered a house of horrors.

Two girls had been hastily released from their chains but a 22-year-old son remained shackled.

The brother told police he and his siblings had been suspected of stealing food and being disrespectful.

The intervention marked a new start for the children who lived in such isolation that the teen who called for help didn’t know her address.

Although the parents filed reports with the state that they home-schooled their children, the oldest child only completed the third grade.

Some children suffered from severe malnutrition, stunted growth and muscle wasting, including an 11-year-old girl who had arms the size of an infant.

Children were deprived of food and things other kids take for granted, such as toys and games, and allowed to do little except write in journals, authorities said.

Disease concern for survivors of Afghanistan earthquake
Steve Smith confirmed as starter for first Test against Sri Lanka
Matildas will be keen to forget 7-0 drubbing by Spain
Upcoming stats will reveal where and how hard rates are hitting economy
Victorian MPs pocket a tidy 2.75 per cent pay raise
Reserve Bank review isn’t a ‘get the governor’ exercise: Jim Chalmers
NSW woman dies in Canadian avalanche while snowboarding at Whistler ski resort
Today's Stories

‘House of horrors’: Californian parents of 13 children plead guilty to torture and years of abuse