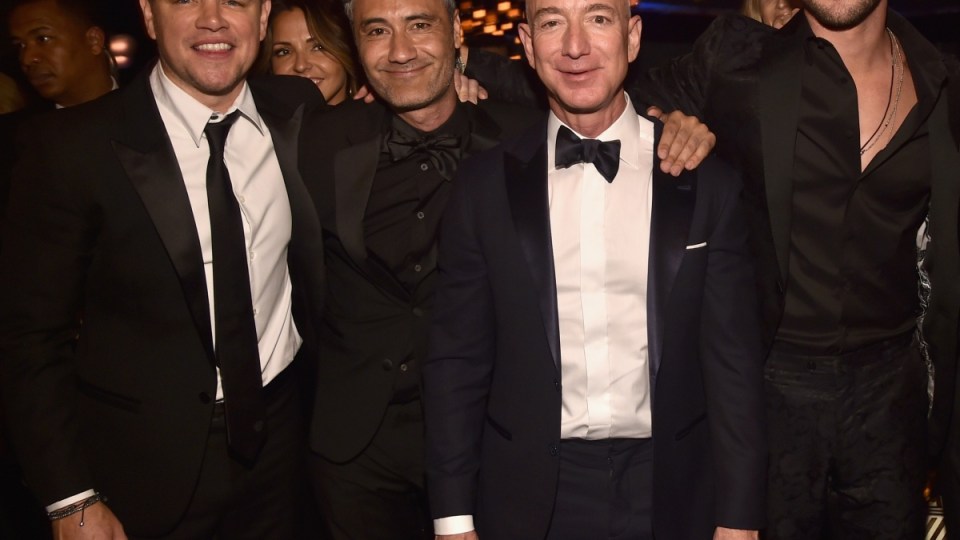 In the hit Broadway musical Hamilton, US founding father Alexander Hamilton is confronted by his political rivals with proof that he’s made hush money payments to cover up an affair.

Rather than endure blackmail and the constant threat of exposure, Hamilton decides to issue his own public confession.

He believes this personal declaration of independence is a clever way to save his honour and outflank his enemies.

Instead, Hamilton is disgraced and his family humiliated. His chance of becoming president – and changing American history – is lost forever.

Perhaps Amazon founder Jeff Bezos was too busy pinging dirty selfies to his mistress to have seen the show and gleaned its lessons. Or maybe he was counting his billions. Whatever his reason for not heeding Hamilton’s lesson, we should be thankful.

Mr Bezos’s decision to expose American Media’s (AMI) extortion plot against him over racy texts and photos is more titillating than anything Mr Bezos or his girlfriend, Lauren Sanchez, might have shared.

Who needs a crotch shot when we are afforded an unobscured view of the scuzzy – and potentially sinister – way a media outlet tries to screw its subjects?

Stories about tycoons having secret love affairs is news. But my suspicions were triggered when I saw how much acreage AMI’s National Enquirer devoted to its exclusive last month – the cover and 11 inside pages. As the editor of People magazine for eight years, I can assure you that a cover story on Mr Bezos’s love life is newsstand poison.

He may be rich, but he lacks the requisite glamour and beauty essential to sell lots of magazines, regardless of his selfie artistry. This big a splash wasn’t based on some bonanza in US supermarket sales.

So what was it based on? Let’s the review the options:

Donald Trump and the Mueller probe

Last autumn, AMI boss David Pecker entered into a deal with special prosecutor Robert Mueller and his investigators looking into Russian influence in the 2016 election.

In exchange for avoiding criminal charges, Mr Pecker and other execs agreed to detail how AMI worked with Trump lawyer Michael Cohen to pay for and then bury the stories of two women who’d slept with Mr Trump. News of Mr Pecker’s co-operation with Mr Mueller upset the President, who had long considered the fellow New Yorker a pal.

Was Mr Pecker targeting Mr Bezos – owner of the Trump-tormenting Washington Post – to get back into Mr Trump’s good graces? Mr Trump’s own tweet delighting in Mr Bezos’s embarrassment – and calling the Enquirer more honest than the Post – lends credence to this theory.

When Mr Trump won in 2016, Mr Pecker sought to exploit his (then) close relationship with the President-elect. He managed to get close to Saudi Arabian officials, including Crown Prince Mohammed Bin Salman, promising White House access in exchange for potential financial help for AMI.

The arrangement included a fawning, four-colour magazine touting the wonders of the kingdom, produced by the AMI staff. Without Mr Trump’s friendship, Mr Pecker would seem to be of little use to the Saudis as an emissary. Unless …

Unless AMI, on behalf of Saudi interests or even with their help, sought to target Mr Bezos to punish him for the Post’s aggressive reporting into the death of their former columnist, Khashoggi. In his Medium posting last week, Mr Bezos said it was his investigation into the leaking of his texts and pictures that seemed to agitate AMI officials.

In the AMI extortion letter, Mr Bezos was told he had to publicly state that he had “no knowledge or basis for suggesting that” AMI’s reporting was “politically motivated or influenced by political forces”.

By the grubby standards usually employed in these shakedown letters, that’s a pretty odd request.

Proof? Nowhere near it, not yet anyway. But AMI’s shameless attempt to hustle Mr Bezos has already launched a federal investigation, according to published reports. In exchange for his plea deal last fall, Mr Pecker and AMI had promised to behave themselves. The Bezos shakedown may have violated that agreement, and could spell more criminal charges for Mr Pecker.

Last June, I wrote about the potential dangers inherent in Mr Pecker’s purchase that month of 13 celebrity magazines. The deal gave him a virtual monopoly on the gossip/celebrity market, with an audience of 38 million.

“What’s to stop him from using those titles from launching unfounded attacks on Mr Trump’s political foes, his Hollywood critics, unwanted immigrants?” I asked then.

I’m still asking – and more urgently. Late last year, AMI and Mr Pecker purchased the largest magazine distributor in the US, giving them enormous control of the actual metal “pockets” that hold magazines in supermarkets, drug stores and other outlets throughout the US. It’s an unprecedented amount of influence.

With that kind of leverage, it’s a wonder whether anyone with lesser means than Mr Bezos will be able to stand up when AMI comes after them.

Larry Hackett is the former editor-in-chief of People magazine, and a current contributor to the US morning television news program Good Morning America

Why the tabloids have really gone after Jeff Bezos