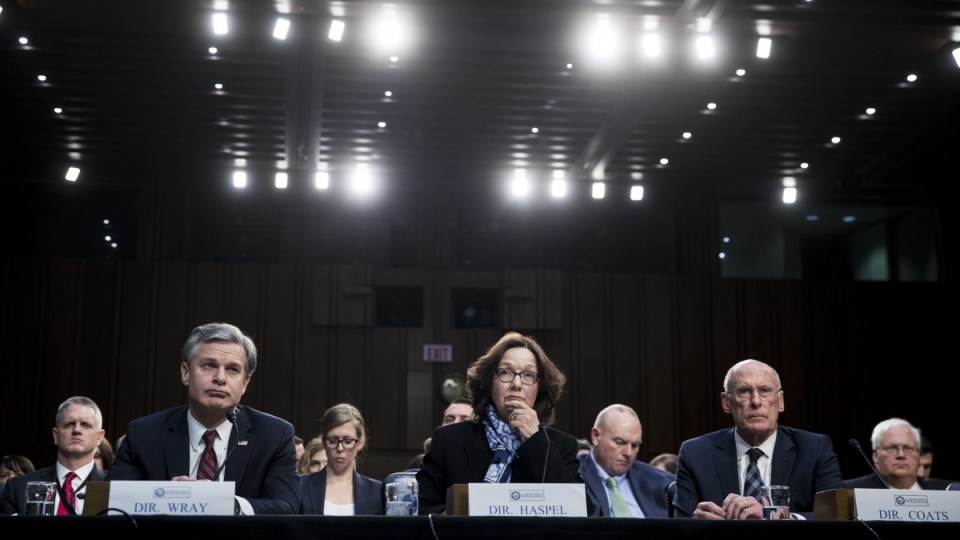 A new American intelligence assessment of global threats has concluded that North Korea is unlikely to give up its nuclear stockpiles and that Iran is not, for now, taking steps necessary to make a bomb, directly contradicting the rationale of two of US President Donald Trump’s foreign policy initiatives.

Those conclusions are part of an annual Worldwide Threat Assessment released on Tuesday (US time) that also stressed the growing cyberthreat from Russia and China, which it said were “more aligned than at any point since the mid-1950s”.

In testimony before the US Senate Intelligence Committee linked to the release of the report, America’s intelligence chiefs tried to avoid directly questioning administration policies. Yet they detailed a different ranking of the threats facing the US, starting with cyberattacks and moving on to the endurance of the Islamic State and the capabilities of North Korea and Iran.

Dan Coats, the national intelligence director, told politicians that the Islamic State would continue “to stoke violence” in Syria. He was backed up by the written review, which said there were thousands of fighters in Iraq and Syria and more than a dozen Islamic State networks around the world.

The starkest contradiction drawn by the intelligence chiefs was their assessment of North Korea.

Mr Trump is expected to meet North Korean leader Kim Jong-Un in February, in a second round of direct negotiations aimed at ridding the North of its nuclear weapons. After his last meeting, in Singapore, Mr Trump tweeted that “there is no longer a Nuclear Threat from North Korea”.

He cited “some activity that is inconsistent with full denuclearisation”, adding that most of what North Korea has dismantled is reversible. He said the North’s “leaders ultimately view nuclear weapons as critical to regime survival”.

Similarly, the threat review declared that “we currently assess North Korea will seek to retain its WMD capability and is unlikely to completely give up its nuclear weapons and production capability.”

Mr Trump has often noted, accurately, that North Korea has suspended missile tests; its last major test was 14 months ago. But on Tuesday, Gina Haspel, the CIA director, said the government in Pyongyang “is committed to developing a long-range nuclear-armed missile that would pose a direct threat to the United States”.

Ms Haspel said it was encouraging that North Korea was communicating with the US. But under questioning by Senator Kamala Harris, who this month announced her candidacy for president, Ms Haspel said the diplomatic objective was still to insist that North Korea fully disclose and dismantle its nuclear program.

On Iran, Mr Coats cited Tehran’s continued support of terrorism in Europe and the Middle East, including sponsoring Houthis in Yemen and Shiite militants in Iraq. He also said that he believed that Iranian hard-liners would continue to challenge centrist rivals.

But on one of Mr Trump’s key assertions – that Iran had cheated on the spirit of the 2015 nuclear agreement, even if it was temporarily following its terms – Mr Coats said Tehran continued to comply with the deal even after the President announced in May that the US would withdraw from it.

“We do not believe Iran is currently undertaking activities we judge necessary to produce a nuclear device,” Mr Coats said.

He added, however, that Iranian officials have “publicly threatened to push the boundaries” of the nuclear agreement if it did not bring benefits that were promised, including a resumption of oil sales and an end to American sanctions against its financial transactions around the world.

Mr Trump has called the nuclear agreement “defective at its core” and warned that Iran would “be on the cusp of acquiring the world’s most dangerous weapons” if it remained in place. The agreement still stands, largely with support from European capitals.

Senator Angus King, who caucuses with Democrats, asked Ms Haspel point-blank if Iran remained in compliance with the nuclear deal.

She said it was, but added that Iranian leaders were considering steps that would “lessen their adherence” to the agreement.

“They are making some preparations that would increase their ability to take a step back if they make that decision,” Ms Haspel said. “So at the moment, technically they are in compliance, but we do see them debating amongst themselves as they’ve failed to realise the economic benefits they hoped for from the deal.”

Intelligence officials have long taken stronger positions than Mr Trump on North Korea’s continuing nuclear activity, the strength of the Islamic State and Russia’s attempts to influence elections. Mr Trump has often chafed at assessments he finds at variance with his worldview.

April Doss, a former associate general counsel at the National Security Agency, said it is not surprising for the intelligence community to stake out facts at odds with the administration’s view, given that the most recent National Intelligence Strategy noted the spy agencies’ responsibility to “speak truth to power”.

The intelligence chiefs emphasised “the commitment to analysing intelligence in a manner tied to objective facts, not domestic partisan agendas,” said Ms Doss, now a partner at a leading US law firm.

Mr Trump famously clashed with the spy agencies about their conclusions that Russia was behind the hacking and influence operations that marred the 2016 presidential election.

On Tuesday, the new director of the Cyber Command, General Paul Nakasone, told the Senate committee that the US efforts to blunt Russian interference in the recent midterm elections had been successful, though he gave no details – an effort Mr Trump has never discussed.

Much of the hearing focused on cyberthreats from Russia and particularly from China, which the written report said is positioned to conduct effective cyberattacks against American infrastructure. It specifically cited Beijing’s ability to cut off natural gas pipelines.

Lawmakers discussed the challenges posed by new technologies being developed by China, Russia and others.

“We’re now living in yet another new age, a time characterised by hybrid warfare, weaponised disinformation, all occurring within the context of a world producing more data than mankind has ever seen,” said Senator Richard Burr, the committee’s chairman.

Taken together, the report paints a picture of threats vastly different from those asserted by Mr Trump.

Notably missing in the written review was evidence that would support building a wall on America’s south-western border; the first mention of Mexico and drug cartels was published nearly halfway through the report – following a range of more pressing threats.

Mr Trump has said the wall is among the most critical security threats facing the US.

US intelligence chiefs contradict Trump on North Korea and Iran