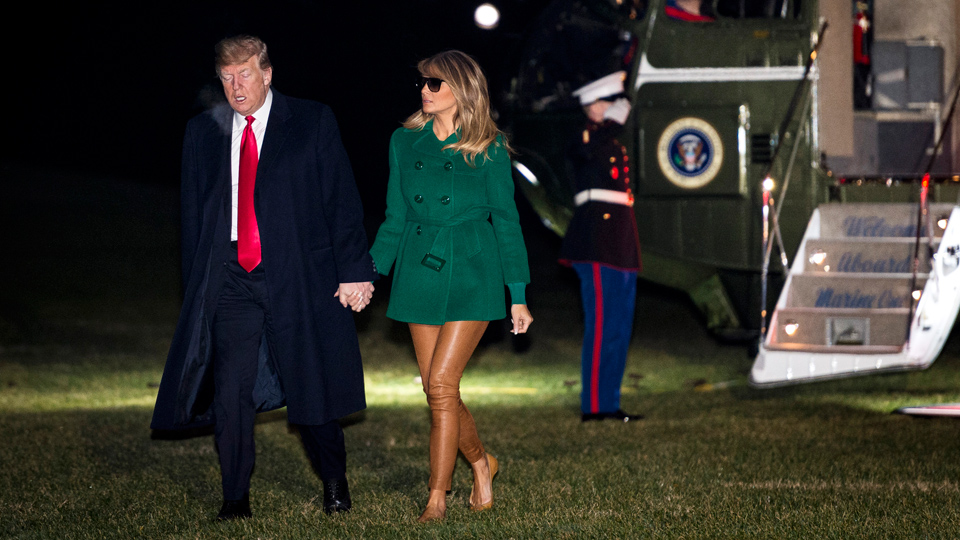 Melania Trump (with Donald Trump) the last time she was seen in public, on December 27 after an Iraq trip. Photo: Getty

Melania Trump flew out of sunny Florida on Monday (local time) and into a growing storm of criticism over the timing and style of her holiday.

Wrapped in a striped knitted coat, the US First Lady boarded a US airforce jet in West Palm Beach after five days at Trump resort Mar-a-Lago.

It was the first time Mrs Trump had been seen in public since December 27, sparking reports she had ‘disappeared’ again, as she did last year for nearly a month.

The former model’s use of official government transport during the longest partial US government shutdown in history – it’s about to tick over into day 32 – was widely questioned.

On Thursday, the same day Melania flew to Florida, President Donald Trump grounded the military aircraft that speaker Nancy Pelosi and a Congressional delegation were to use to visit American troops in Afghanistan.

The return cost for Mrs Trump’s Florida visit was estimated at $97,000. But the cost in the court of public opinion could be higher if Twitter is any litmus test.

“FLOTUS flies to Mar-a-Lago on your dime while you stand in line at food banks,” wrote one user. 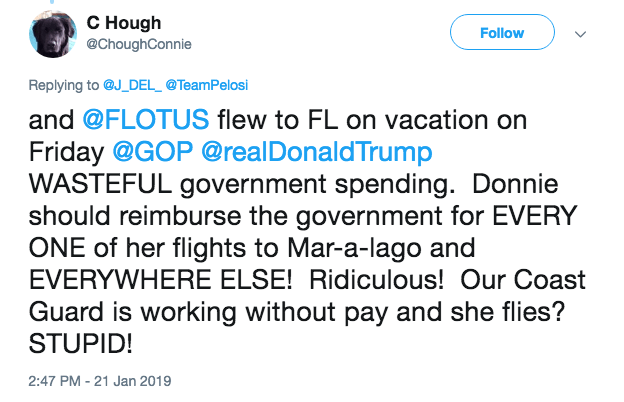 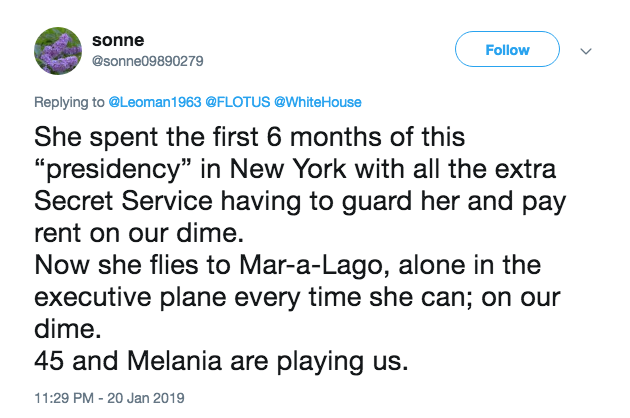 But other users pointed out that the First Lady, who travelled with son Barron, 12, can’t fly commercial for security reasons.

Mr Trump has been sparing in his own travel during the shutdown, which has seen about 800,000 federal workers sent home or working without pay.

Last week he flew to the shared border between the US and Mexico in Texas to shore up his argument for $US5.7 billion ($8 billion) to build a wall. That demand sparked the shutdown on December 22.

On Monday, he spoke to an annual farmers’ convention in New Orleans but cancelled his planned trip to a global economic forum in Davos, Switzerland, next week.

Still, there was something to celebrate close to home. On day 30 of the partial government shutdown, Mrs Trump marked her husband’s “unforgettable two years” in the White House with a Twitter post of them dancing at the inauguration.

The President retweeted his wife: “A truly great First Lady who doesn’t get the credit she deserves!”

It has been an unforgettable two years in the @WhiteHouse. I am honored to serve this great nation! 🇺🇸

Meanwhile, the shutdown continues with no sign it will end soon.

With polls showing a majority of Americans blame Mr Trump and Republicans for the impasse, the President said in a televised address on Sunday he wants “to break the logjam and provide Congress with a path forward to end the government shutdown”.

During the brief speech, Mr Trump offered temporary protection from deportations for some undocumented immigrants in exchange for the billions demanded for border wall funding.

That offer was swiftly described by House Speaker Nancy Pelosi as a “non starter” and rejected by opposition Democratic lawmakers.

On Twitter, Mr Trump claimed Ms Pelosi and other Democrats had “turned down my offer yesterday before I even got up to speak”.

He said his opponents “don’t see crime and drugs, they only see 2020 – which they are not going to win. Best economy!”

On January 20, the US Transportation Security Administration said unscheduled absences among its staff – who are required to work without pay during the shutdown – rose to a record 10 per cent, according to reports.

Non-profit groups to help low-income renters are “scrambling to survive” without government payments, and “most other social safety net programs” are facing a similar emergency, reported The New York Times.

The Department of Agriculture has announced that funding for a program that provides food stamps and other aid to almost 40 million poor and working-class Americans, will run out by March 1.

Melania flies into storm of disapproval as US government shutdown continues