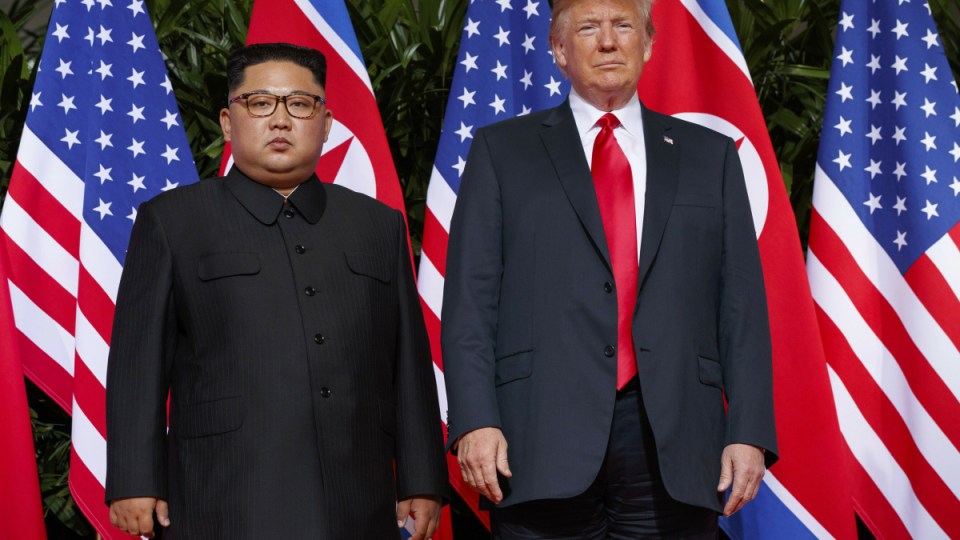 Mr Trump slammed his own spy chiefs for contradicting him. Photo: AAP

According to White House spokesperson Sarah Sanders, the president met with the country’s top negotiator Kim Yong-chol in the Oval office on Saturday (Friday local time).

“President Donald J Trump met with Kim Yong Chol for an hour and (a) half, to discuss denuclearisation and a second summit, which will take place near the end of February,” Ms Sanders said.

“The President looks forward to meeting with Chairman Kim at a place to be announced at a later date.”

Kim Jong-un said in a New Year speech he was willing to meet Mr Trump “at any time.”

His chief negotiator and former hardline spy also met US Secretary of State Mike Pompeo in earlier at a Washington hotel.

Ms Sanders told reporters after the White House meeting they were continuing to have conversations about denuclearisation.

“The President had about an hour-and-a-half-long meeting. There was a US delegation; we’ll send out those specific names here shortly. I can tell you Secretary of State Mike Pompeo was in the room, as were others from the President’s team. It was productive and we’re going to continue those conversations,” she added.

President @realDonaldTrump looks forward to a second summit with Chairman Kim, which will take place near the end of February. Location will be announced at a later date.

Hours before Kim Yong-chol’s arrival, Mr Trump – who declared the day after the June 12 Singapore summit that the nuclear threat posed by North Korea was over – unveiled a revamped US missile defence strategy that singled out the country as an ongoing and “extraordinary threat.”

However, the visit is a sign of movement in a diplomatic process that has struggled for months and has finally yielded the announcement of plans for another summit.

However, there has been no indication of any narrowing of differences over US demands that North Korea abandon a nuclear weapons program that threatens the US or over Pyongyang’s demand for a lifting of punishing sanctions.

US-based analysts said the North Koreans would likely be seeking a clearer message from the Trump administration on any concessions it may be willing to make.

Communist-ruled Vietnam, which has good relations with both the United States and North Korea, has been widely touted as the most likely venue for a second Trump-Kim summit.