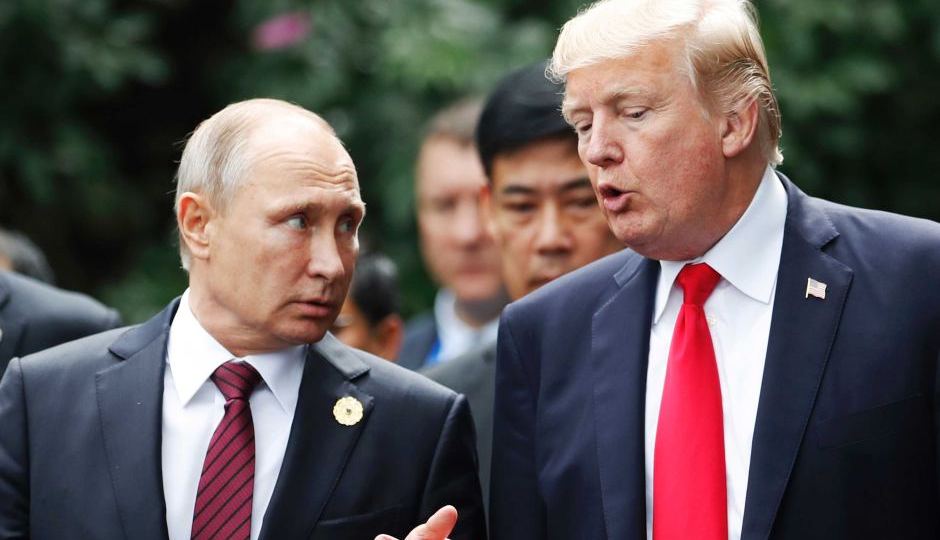 The US President has been besieged by damning reports over the weekend. Photo: AP

A US House of Representatives committee will look into a newspaper report that the FBI investigated whether President Donald Trump has been working on behalf of Russia, against US interests.

The New York Times reported that the probe began in the days after Mr Trump fired James Comey as director of the Federal Bureau of Investigation in May 2017 and said the agency’s counterintelligence investigators had to consider whether Mr Trump’s actions constituted a possible threat to national security.

The White House late on Friday rejected the Times article as “absurd”, while Mr Trump on Saturday lashed out at Mr Comey and the FBI in half a dozen tweets.

….the FBI was in complete turmoil (see N.Y. Post) because of Comey’s poor leadership and the way he handled the Clinton mess (not to mention his usurpation of powers from the Justice Department). My firing of James Comey was a great day for America. He was a Crooked Cop……

House Judiciary Committee chairman Jerrold Nadler said his panel “will take steps to better understand both the president’s actions and the FBI’s response to that behaviour” in coming weeks.

He also said lawmakers would seek to protect investigators from the president’s “increasingly unhinged attacks”.

“There is no reason to doubt the seriousness or professionalism of the FBI, as the president did in reaction to this story,” Mr Nadler, a New York Democrat, said in a statement.

“We have learned from this reporting that, even in the earliest days of the Trump administration, the president’s behaviour was so erratic and so concerning that the FBI felt compelled to do the unprecedented – open a counterintelligence investigation into a sitting president,” Mr Nadler said.

…Funny thing about James Comey. Everybody wanted him fired, Republican and Democrat alike. After the rigged & botched Crooked Hillary investigation, where she was interviewed on July 4th Weekend, not recorded or sworn in, and where she said she didn’t know anything (a lie),….

House Intelligence Committee chairman Adam Schiff said he could not comment on the specifics of the report, but said his committee would press ahead with its probe of Mr Trump’s contacts with Russia.

“Counterintelligence concerns about those associated with the Trump campaign, including the president himself, have been at the heart of our investigation since the beginning,” said Mr Schiff, a California Democrat.

Mr Schiff said meetings, contacts and communications between Trump associates and Russians, as well as “the web of lies about those interactions, and the president’s own statements and actions,” have heightened the need to follow the evidence where it leads.

Mr Trump took notes of a 2017 meeting with Russian President Vladimir Putin in Hamburg from his own interpreter and took other steps to conceal details of their conversations, a report in The Washington Post said on Saturday.

I have been FAR tougher on Russia than Obama, Bush or Clinton. Maybe tougher than any other President. At the same time, & as I have often said, getting along with Russia is a good thing, not a bad thing. I fully expect that someday we will have good relations with Russia again!

White House spokeswoman Sarah Sanders said the report, which cited unnamed current and former US officials, was “so outrageously inaccurate it doesn’t even warrant a response”.

The New York Times said FBI officials became suspicious of Mr Trump’s ties to Russia during the 2016 presidential campaign, but held off on opening an investigation until Mr Trump tied his dismissal of Mr Comey to a probe into allegations of election meddling by Russia.

The FBI also considered whether the Republican president’s firing of Comey amounted to obstruction of justice.

US special counsel Robert Mueller took over the investigation into Mr Trump days after the FBI opened it, as he examined allegations of Russian election interference, the Times reported. Russia denies it sought to influence the election.

Mr Trump responded on Saturday by lashing out at the Times and former FBI leaders, and criticised the agency’s earlier probe of Democrat Hillary Clinton, his rival in the 2016 election.

“Wow, just learned in the Failing New York Times that the corrupt former leaders of the FBI, almost all fired or forced to leave the agency for some very bad reasons, opened up an investigation on me, for no reason & with no proof, after I fired Lyin’ James Comey, a total sleaze!,” Mr Trump tweeted.

Mr Comey took to Twitter later on Saturday, offering a quote he attributed to former president Franklin Delano Roosevelt: “I ask you to judge me by the enemies I have made.”