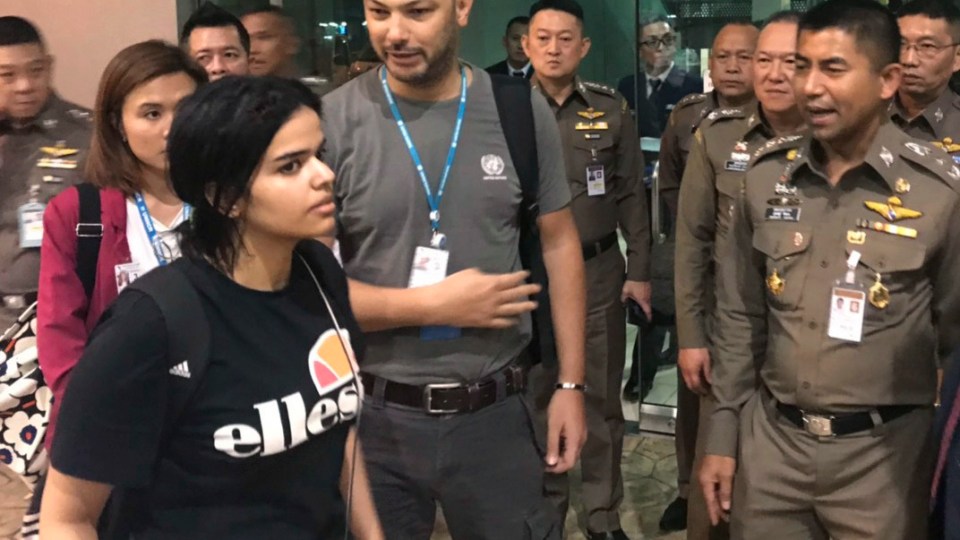 Ms Alqunun says she feels safe in the hands of the UNHCR. Photo: Thailand Immigration Bureau

An 18-year-old Saudi woman, who fled her family bound for Australia,  has left Bangkok airport “under the care” of the United Nations refugee agency after a backdown by Thai authorities.

Rahaf Mohammed Alqunun spent Monday barricaded in her airport hotel room after refusing Thailand’s attempts to return her to Kuwait, where she said she faced death at the hands of her family.

Ms Alqunun said she feared her family would kill her because she had renounced Islam.

“My brothers and family, and the Saudi embassy will be waiting for me in Kuwait,” Ms Alqunun told Reuters.

“My life is in danger. My family threatens to kill me for the most trivial things.”

Her relatives have not commented on her allegations.

In a series of tweets Monday, Ms Alqunun claimed she was abducted  and that Saudi Arabian diplomatic staff confiscated her passport on arrival at Bangkok’s Suvarnabhumi airport.

She subsequently appealed for help from Australia, Canada, the United States, Britain and other European nations.

“Please I need u all. I’m shouting out for help of humanity,” she tweeted.

Ms Alqunun said she was being held at an airport hotel by diplomatic and airline staff, despite having a visa to travel to Australia.

The teenager vowed to not leave her hotel room until she spoke with the UN High Commissioner for Refugees.

She later tweeted that she felt safe under UN protection and her passport had been returned.

Hey I'm Rahaf. My father just arrived as I heard witch worried and scared me a lot and I want to go to another country that I seek asylum in
But at least I feel save now under UNHCR protection with the agreement of Thailand authorities. And I finally got my passport back🙏🏻❤️ pic.twitter.com/pQER7HDVi7

Thailand’s chief of immigration police, Major General Surachate Hakparn, told reporters Ms Alqunun’s father was expected to arrive in Bangkok on Monday night, however she would not be sent anywhere against her wishes.

General Surachate said Thailand would “take care of her as best we can”.

“She is now under the sovereignty of Thailand. No-one and no embassy can force her to go anywhere,” he said.

“Thailand is a land of smiles. We will not send anyone to die.”

General Surachate said the office of the UNHCR expected to take at least five to seven days to evaluate her case and claims.

Labor’s foreign affairs spokeswoman Penny Wong said she was concerned by the reports over the situation and had sought further information from the government.

“It is a very distressing position she is in,” Senator Wong said.

Ms Alqunun said she had been abused by her family and posted her passport details on Twitter to confirm her identity.

Saudi Arabian authorities earlier denied their involvement, saying Thai officials stopped Ms Alqunun because she did not have a return ticket or itinerary to show she was a tourist.

“She will be deported to the state of Kuwait where her family live,” the Saudi Embassy said in a statement.

“The embassy does not have the authority to stop her at the airport or anywhere else.”

Saudi women are subject to strict male guardianship laws and must obtain consent from a male relative for travel documents.

Ms Alqunun told a Thai human rights worker her family kept her in her room for six months because she cut her hair.

She had asserted her independence and renounced Islam, but had been forced to pray, wear a hijab and was beaten by her brother.

Ms Alqunun is understood to have fled from her family two days ago during a trip to Kuwait.