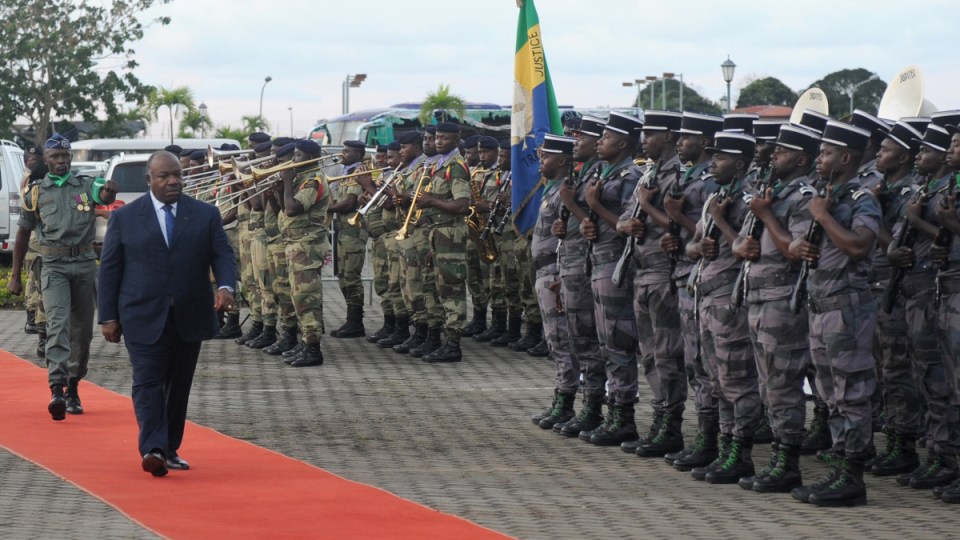 President Ali Bongo is paraded before the military in Gabon in 2017. Photo: Getty

Four of the five Gabon military officers who attempted a coup in the early hours of Monday morning have been arrested at the radio station they briefly took control of.

Government spokesman Guy-Bertrand Mapangou told Reuters a fifth officer fled and is being searched for.

The military officers seized the state radio station and declared their dissatisfaction with President Ali Bongo, who is recovering from a stroke in Morocco.

A New Year’s eve address by Mr Bongo “reinforced doubts about the president’s ability to continue to carry out of the responsibilities of his office,” said Lieutenant Kelly Ondo Obiang, the leader of the self-declared Patriotic Movement of the Defence and Security Forces of Gabon.

The radio message was broadcast at 4.30am local time on Monday.

A source close to the government said there were gunshots around the national television station, but that the plotters appeared to be a small group of soldiers.

Mr Bongo, 59, was admitted to hospital in October in Saudi Arabia after suffering a stroke. He has been in Morocco since November to continue treatment.

In his speech on New Year’s eve, Mr Bongo acknowledged health problems but said he was recovering.

He slurred some of his words and did not move his right arm, but otherwise appeared in decent health.

The Bongo family has ruled the oil-producing country for nearly half a century.

Mr Bongo has been president since succeeding his father, Omar, who died in 2009.

His re-election in 2016 was marred by claims of fraud and violent protest.