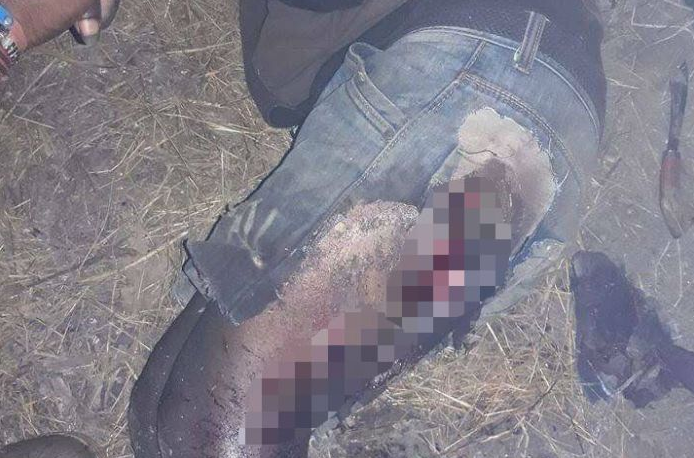 Papuan indepence fighters say this wound, so horrific it has been pixelated, was caused by phosphorous shells that banned under international law. Photo: Free West Papua Campaign

Photos published by The Saturday Paper show a man with a gaping wound to his leg and severe burns.

The report included claims the wounds may have been inflicted by white phosphorous, a chemical incendiary that cannot be extinguished and causes horrific injuries.

In a statement provided to the ABC by Papua Military Command spokesman Colonel Mumahammad Aidi, Indonesia dismissed the reports as “propaganda” and “fake news”.

“The people who write the propaganda are ridiculous people, and stupid,” the statement said.

The statement said white phosphorous bombs “cannot be carried by a personnel-carrier sized helicopter” and must be fired from “tens or hundreds of kilometres away, or dropped from the air by a bomber”.

“This cheap propaganda has been deliberately produced by the KKSB [Armed Civilian Group] as a deliberate disguise, to occupy the public with hoaxes and propaganda, so people will forget about the fact that this group [has killed] 28 civilians.”

In recent weeks, Indonesian soldiers have been hunting separatist rebels accused of killing at least 17 construction workers, who were attacked while building a road through the remote region of Nduga.

The Indonesian military said the operation was merely aimed at recovering the bodies of the slain workers.

Papuan Governor Lukas Enembe has called for an end to the operation, saying “this is enough”.

“I, as the Governor of Papua, am asking President Jokowi [Joko Widodo] to withdraw all the troops in Nduga,” he said.

Indonesia’s police chief in Papua, Inspector General Martuani Sormin, told the ABC: “The TNI and police does not use phosphorus bombs or any sort of [dropped] bombs.”

“Australia has a motive to make a bad impression [of Indonesia] before the international community,” he said.

When asked if the security operation would be suspended during Christmas, as requested by Papuan leaders, he responded:

“No-one can stop the duty of the police and TNI to guard and secure the country, including in Mbua and Nduga.”