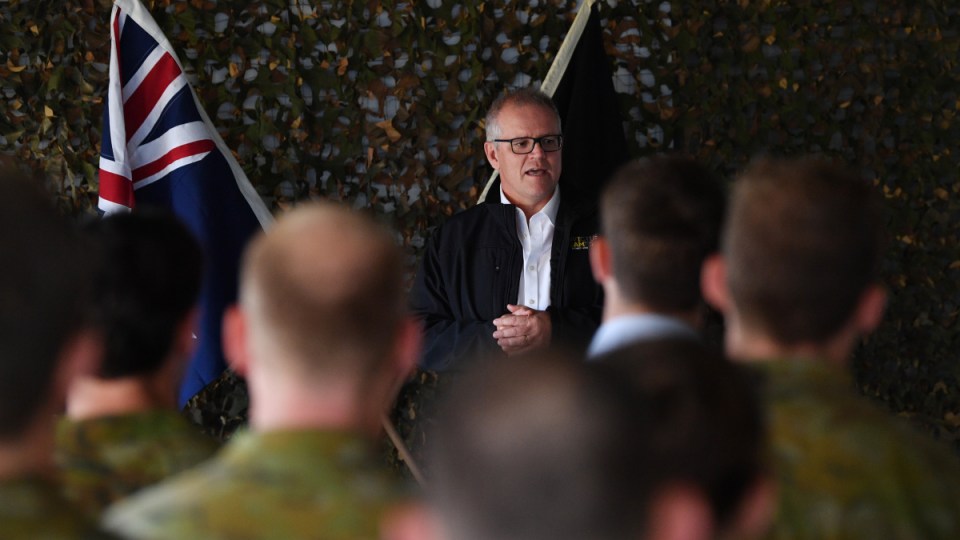 Prime Minister Scott Morrison has made a pre-Christmas visit to hundreds of Australian troops deployed in the Middle East.

“I understand it’s a sacrifice – I understand it’s a big thing to be away from your family at this time of year – and that’s why I’ve decided to come just to say thank you from one Australian to another,” he told troops at the Taji Military Complex north of a Baghdad.

It was the Liberal prime minister’s first visit to the Middle East after taking on the top job in August.

A planned visit to Afghanistan was cancelled due to operational security reasons, on advice from the Chief of the Australian Defence Force.

Video of the meeting showed Mr Morrison, wearing a Sydney Invictus Games jacket, hand out Cronulla Sharks footballs and take selfies with some of the troops.

As he broke bread with hundreds of soldiers across Iraq from before dawn until well after dark, Mr Morrison repeatedly stressed he would honour their contributions long after their active service.

He acknowledged that for many troops it would be the first Christmas away from their families and friends. Others had endured the tyranny of distance many times before.

“On behalf of my family, to you and your families, I want to say thank you very much for your service,” Mr Morrison said.

“But I also want to thank you as a prime minister, as the leader of the government, as a member of the Australian Parliament, on behalf of our entire nation.”

[1/3] It has been an honour and a privilege to visit around 800 of Australia’s serving men and women in our defence forces here in Iraq and at our main Middle East logistical hub to thank them for their service. pic.twitter.com/qOQBVxRgyT

Tens of thousands of Australian soldiers have served in the region since 2001.

There are now about 800 Australian soldiers deployed in Iraq, Australia’s main logistical hub in the Middle East.

Roughly 300 of these troops are involved in Task Force Taji.

The rotating group has trained almost 40,000 Iraqi soldiers since its mission began in 2015.

Under their guidance, Iraqi supervisors now teach their own troops infantry skills such as cordoning, searching, ambushing and marksmanship.

Captain Steve Moye, who is just one month into his first deployment, has noticed an immediate impact.

“Even just in the four weeks we’ve been here the improvement in the individual skills of the Iraqi soldiers has been exponential,” he said.

Australia has 150 ADF troops assigned to the air task group, along with 80 special operations soldiers.

Addressing special forces troops at a Baghdadi base, the Prime Minister conceded that while each had chosen to serve, many other major decisions were beyond their control.

“I would hate you to think that as you are doing that – and there are great days, and there are really difficult days – that on any of those days, you didn’t know how much your country appreciated you.”

With a wife and two kids back home in Brisbane, Captain Moye was forced to reshuffle birthday parties and open Christmas presents early before he was shipped overseas.

Just how he will cope on Christmas remains to be seen. “We’ll see how I go on the day.”

Lance Corporal Manika Goode, a transport and logistics expert, will be leaning on her fellow troops come Christmas Day.

“We’re all really close so it’ll make it a lot easier,” she said.

Handshakes and small talk gave way to brass bands and a bilateral meeting when Mr Morrison sat down with newly-elected Iraqi Prime Minister Adil Abdul-Mahdi at his palace in Baghdad.

Mr Abdul-Mahdi stressed the need for ongoing security co-operation to liberate Iraq from the Islamic State terrorist organisation, and on improving economic relations to drive investment and jobs.

He described terrorism and poverty as “common enemies” of Iraq and its people.

Along with its contribution to an international effort to conquer Islamic State, Australia is a major contributor of humanitarian aid to Iraq.

While Islamic State militants are largely suppressed in Iraq, the leaders did not canvass any significant reduction in the number of Australian troops or amount of aid.

Instead, they discussed how Australian aid could be better spent on reconstruction works and delivering essential services to all regions of Iraq.

“That’s what will make them independent, free and sovereign,” Mr Morrison told an AAP reporter who travelled with the Prime Minister to the Middle East.