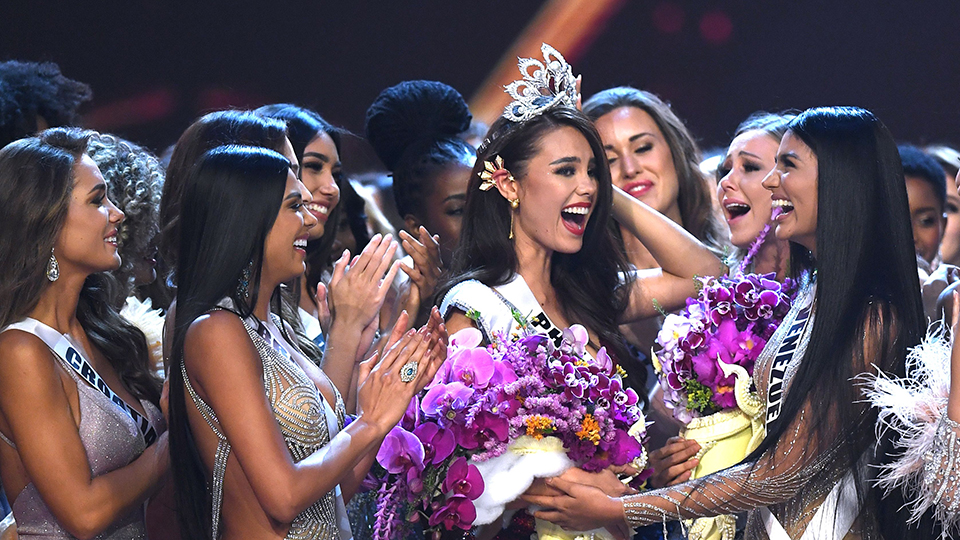 Catriona Gray of the Philippines is congratulated by contestants after being crowned Miss Universe 2018. Photo: Getty
opinion

The mention of a beauty pageant takes me back to watching one on a tiny black-and-white TV set, sitting on the floor in my gran’s bedroom, back when a 20¢ bag of mixed lollies was as big as your head. That’s the last time I watched Miss Universe.

So I’m surprised to learn that this old trope – sniggered up as a marketing vehicle for a California swimsuit company in 1952 – is still strapping on its stilettos. (Keep your jockstraps fastened, beauty-pageant historians, I note there was also a decade or so of Miss Universe contests in the US from 1920.)

The final of Miss Universe 2018 played out on Monday in Bangkok. For a while, the favourite to win the crown was Angela Ponce, 27, the pageant’s first transgender contestant, aka Miss Spain. (What’s with the Miss with all these contests? Miss-ogyny?) The organisers were cock-a-hoop over this first transgender entrant, crowing about the first all-woman judging panel and were all puffed up that some contestants were talking about the #MeToo movement.

I suppose they’re steps in a positive direction, but Miss Universe’s feet are forever bound. I can’t see how a contest that swirls mindlessly around revealing evening gowns, skimpy swimsuits and sashes can ever be an empowering, feminist event. And yes, even though some pageants have dropped the swimsuit category or made it optional, Miss Universe teeters on with contestants required to flaunt the eternal incongruity of high heels and bathers.

A highlight reel on YouTube includes insightful from the commentators, such as, “Wow, wow … that’s all I can say, she checks all the boxes and from the moment she walked in rehearsal, I couldn’t stop looking at her and neither could the other contestants” and, “She doesn’t smile a lot, let’s see if she gives us some now. Good girl!”

“Our organisation believes that confidence is the most important quality for a person to possess,” is the bold-type declaration on the Miss Universe website from president Paula Shugart, above a whole lot of clichéd tosh about empowerment and positive change.

Even if you dressed Miss Universe contestants in sweatshop-free jeans, hemp shirts and AllBirds, they’re always going to be on that stage for one reason: the idea their physical appearance is somehow superior to the next young woman’s. That ain’t ever gonna be woke. It’s a perfect exemplar of superficial judgment and ultimately one giant, expensive and pointless yawn.

In an Instagram Live video, the two native English speakers giggled as they mocked Miss Vietnam H’Hen Niê and Miss Cambodia Rern Sinat, seemingly for the fact that they are not native English speakers. I wonder what they made of the eventual winner, Miss Philippines, Catriona Grey? Oh, right, she was born in Cairns, so she’s OK. So much for wanting world peace.

I can think of 100 better ways to empower women. Number one: no more Miss Universe.

Another one already in action is Superstars of STEM, Science and Technology Australia’s initiative to smash the gender stereotypes. It launched in 2017 and last week announced the next constellation of 60 female scientists and technologists who are being groomed for something way more important than a runway.

It’s an equality incubator, helping to turn female scientists and technologists into celebrities and get equal representation in the media of women and men working in STEM. These women are the kind of role models I want for my teenage daughters.

Let’s shoot for the real universe. Astrophysicist Lisa Harvey-Smith, Australia’s first Women in STEM ambassador, just wrapped a national tour of When Galaxies Collide, a one-woman and countless stars-and-planets show based on her book of the same name. I took my daughters to see her at the University of New South Wales.

I couldn’t tell you what she was wearing – possibly jeans and a shirt – but without a single twirl she kept us spellbound for more than two hours, explaining huge concepts and awesome facts about time and space. It inspired our family to dig out our little telescope and book a trip to Parkes for next July, the 50th anniversary of the first moon landing.

Way back when I was about seven years old and watching Miss Universe with my darling gran, I complained to her there was not a single alien contestant. Like World Series baseball where only US teams are on the diamond, it doesn’t seem equitable or accurate for Miss Universe to be battled out between earthlings. Until we convince life forms from other planets to join these parades, it’s another reason it’s a meaningless contest. And even then…

Jane Nicholls is a former editor of WHO and editor-at-large of People in the US. She was chief executive of online startup The Global Mail and is now a freelance journalist and editor.