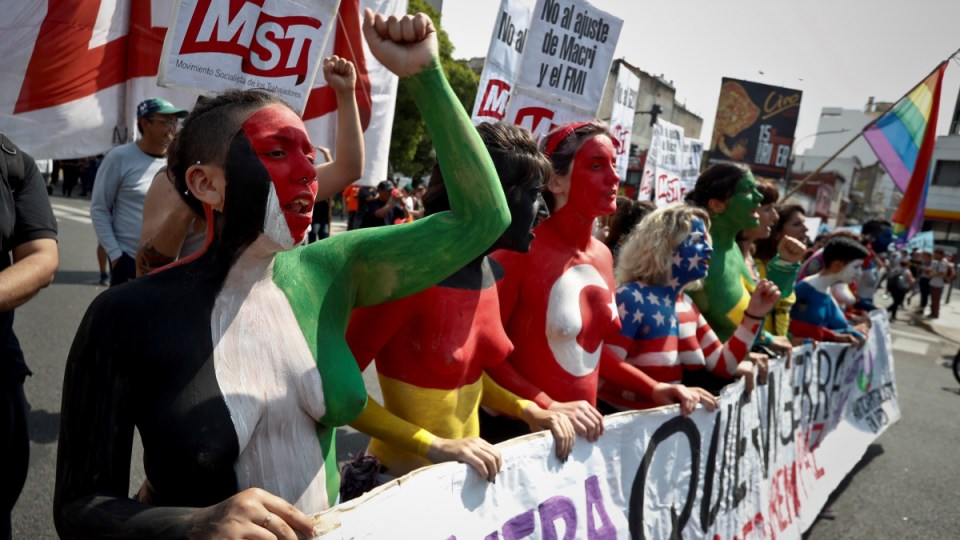 Thousands of anti-G20 protesters have gathered in Buenos Aires as world leaders met for day one of the two-day summit. Photo: AAP

Thousands of demonstrators are flooding a downtown avenue in Buenos Aires to protest the G20 summit taking place in the Argentinian capital.

The protesters are waving flags and holding up banners with slogans including “Go away G-20” and “Go away Trump”.

Activists from France, Germany, Italy and several Latin American nations are taking part alongside Argentinians in a demonstration organised by left-leaning groups and labour unions.

The demonstration is 10 kilometres from the summit meeting.

About 22,000 police officers and other security forces are guarding the leaders during the two-day summit, which began on Saturday (Friday local time).

Argentina is the first South American country to host the G20 and Argentinian authorities say they will not tolerate violence or allow the gathering to be disrupted.

At the summit, Chinese President Xi Jinping and the leaders of major developing economies condemned protectionism in remarks overshadowed by US President Donald Trump’s threat to escalate tariffs on China.

Xi and leaders from the BRICS group of leading emerging economies –which comprise Brazil, Russia, India, China and South Africa – issued a statement calling for open international trade and a strengthening of the World Trade Organisation.

“The spirit and rules of the WTO run counter to unilateral and protectionist measures,” they said on Friday.

“We call on all members to oppose such WTO-inconsistent measures, stand by their commitments undertaken in the WTO.”

Mr Trump has no plans to meet with the crown prince but hasn’t ruled the possibility out.

“They exchanged pleasantries at the leaders’ session as he did with nearly every leader in attendance,” the White House official said.

The two men beamed widely and clasped hands in something of a cross between a handshake and a high-five.

The crown prince patted Mr Putin’s hand three times for emphasis as the two leaders took their seats next to each other.

Mr Putin and Prince Mohammed are due to hold bilateral talks on Sunday (Saturday local time), according to Kremlin documents seen by Reuters.

French President Emmanuel Macron was captured on video footage speaking to the crown prince on the summit sidelines.

Mr Macron conveyed “very firm” messages to the prince over the killing of Saudi journalist Jamal Khashoggi and the need to find a political solution for the situation in Yemen, an Elysee Palace official said.

The Saudi Gazette newspaper posted a video of the meeting online showing the two speaking in hushed tones with their heads close together.

In the audio, it is possible to make out the prince saying “don’t worry”, to which Macron responds “I am worried”.

Later in the one-minute clip Macron says: “You never listen to me” and the crown prince replies: “I will listen, of course”.

At the end Mr Macron can be heard saying “I am a man of my word”.

This year’s gathering is a major test for the Group of 20 industrialised nations, whose leaders first met in 2008 to help rescue the global economy from the worst financial crisis in seven decades.

Hanging over the summit in Buenos Aires is the trade dispute between the United States and China, the world’s two largest economies, which have imposed tariffs on hundreds of billions of dollars on each other’s imports after Trump launched an effort to correct what he views as China’s unfair commercial practices.

Beijing hopes to persuade Mr Trump to abandon plans to hike tariffs on $US200 billion ($274 billion) worth of Chinese goods to 25 per cent in January, from 10 per cent at present.

Mr Trump said on Friday there were some positive signs.

“We’re working very hard. If we could make a deal that would be good. I think they want to. I think we’d like to. We’ll see,” he said, speaking during a meeting with Japanese Prime Minister Shinzo Abe.