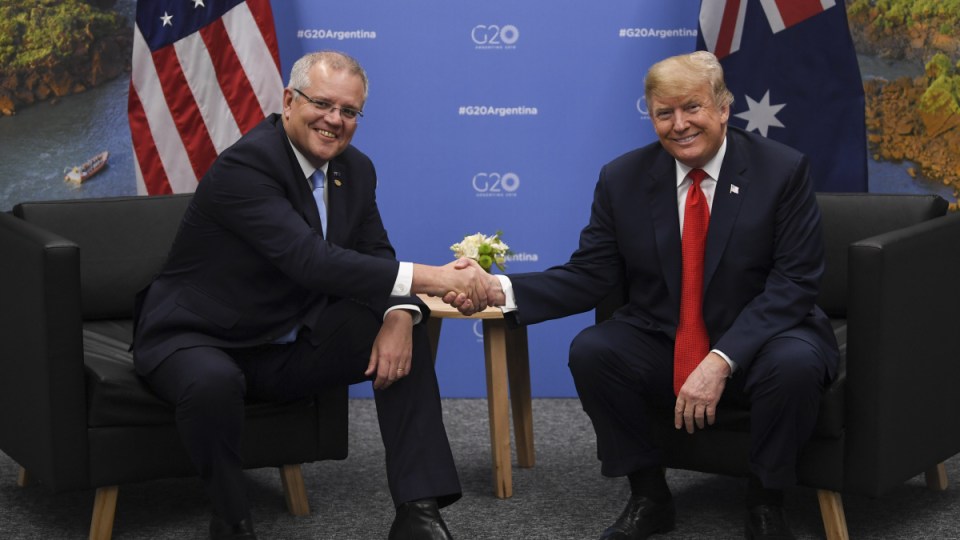 US President Donald Trump has told Scott Morrison he has done “a fantastic job in a very short period of time” as prime minister after meeting for several minutes at the G20 summit in Argentina.

The leaders spoke about trade, co-operation in the Pacific and the security situations in Iran and North Korea.

“Just getting to know each other and so far so good, I think it’s going to be a great relationship,” Mr Trump said in the meeting in Buenos Aires on Saturday (Friday local time).

“I know you’ve done a fantastic job in a very short period of time.

“You’ve done a lot of the things that they’ve wanted over there and that’s why you’re sitting right here.”

Mr Morrison said Australia and the United States “have always been the greatest of friends”.

“Not just in various strategic co-operation but economically, and the people-to-people relationships, well, there’s none better,” he said.

At a press conference after the meeting, Mr Morrison revealed he had been asked to explain the political process used to replace Malcolm Turnbull as leader (who had only visited the White House in February this year).

“They have their inquiries, and when you describe the parliamentary system, it’s a foreign system to the presidential system,” he said.

“We just ran through what the events were,” Mr Morrison said.

Leaders of the world’s biggest economies are assembling in Buenos Aires to tackle a broad range of topics, from trade to migration and climate change.

The escalating China-US trade war is overshadowing the meeting of the world’s key leaders, but Mr Morrison said the US is pursuing a clear course ahead of its meeting with China on Saturday night local time.

“Whether they come to an agreement tomorrow, really only they can discern that. But … the suggestion that the path the United States is pursuing has a protectionist motivation, I think is false.”

Mr Trump had earlier announced the surprise cancellation of the Russia meeting on Twitter, citing the geopolitical crisis that was ignited when Russia seized three Ukrainian naval vessels off the Crimean Peninsula on Sunday.

Based on the fact that the ships and sailors have not been returned to Ukraine from Russia, I have decided it would be best for all parties concerned to cancel my previously scheduled meeting….

“Based on the fact that the ships and sailors have not been returned to Ukraine from Russia, I have decided it would be best for all parties concerned to cancel my previously scheduled meeting … in Argentina with President Vladimir Putin,” Mr Trump tweeted.

Mr Morrison also sat down for a tête-à-tête with French President Emmanuel Macron where they discussed greater cooperation in the Indo-Pacific as China strives to extend its influence in the region, the navy submarine contract and reforming the WTO.

Australia’s $50 billion undertaking to purchase a fleet of re-designed French submarines has so far only existed on the drawing board.

The controversial vessels must be re-designed to replace their current nuclear propulsion systems with diesel-electric propulsion – an unprecedented initiative that critics charge will see the price tag soar.

Shortly before Mr Trump announced he was snubbing Mr Putin, his former lawyer and fixer Michael Cohen pleaded guilty in a New York court to charges that he lied to Congress about the property mogul’s contacts with Russia.

Mr Cohen had  testified that negotiations to build a Trump hotel in Moscow ended in January 2016. It was later revealed not only that they  continued until June, but also that a letter had been sent seeking Mr Putin’s help to get the stalled project up and running.

With widespread expectations in Washington that Russiagate prober Robert Mueller is poised to unveil fresh indictments of Trump’s circle, meeting with the strongman thought to have provided dirt on Hillary Clinton would not have been a good look.

Mr Trump forced Canada and Mexico to renegotiate the 24-year-old North America Free Trade Agreement which he blamed for US companies moving jobs to low-wage Mexico and being placed at a disadvantage by Canadian outfits.

Neither nation’s legislature has yet signed off on the the new agreement, which is due to be endorsed in principle in Buenos Aires.

And then there’s China and the prospect of a stepped-up trade war.

The scheduled meeting with Premier Xi on Sunday (Saturday night local time) represents without a doubt the most tense and high-stakes meeting on Mr Trump’s schedule – a negotiation that will unfold amid a flurry of confusing signals and about-face statements.

Only days before the summit, Mr Trump said he planned to increase current tariff levels on $200 billion ($273 billion) of Chinese imports, raising the possibility of a further $267 billion ($365 billion) in trade sanctions.

But just before taking off for Argentina, Mr Trump told reporters  that while China was interested in striking a deal, “I don’t know if I want to do it”.

Earlier,  German Chancellor Angela Merkel missed the official opening due to problems with her Airbus A340-300, which had only just begun its journey when it was forced to make an emergency landing in Cologne.

This year’s G20 is expected to be one of the most consequential summits since the group’s leaders first met in 2008 to plan how to contain the economic crisis.

Argentina, this year’s G20 president, has stressed the importance of the summit as a consensus-building forum. But the divisions have only highlighted how fractured the grouping has become on key global issues.

The summit is supposed to focus on development, infrastructure and food security. But soured US-European relations and a lack of agreement on trade, migration and climate change are also expected to come up.