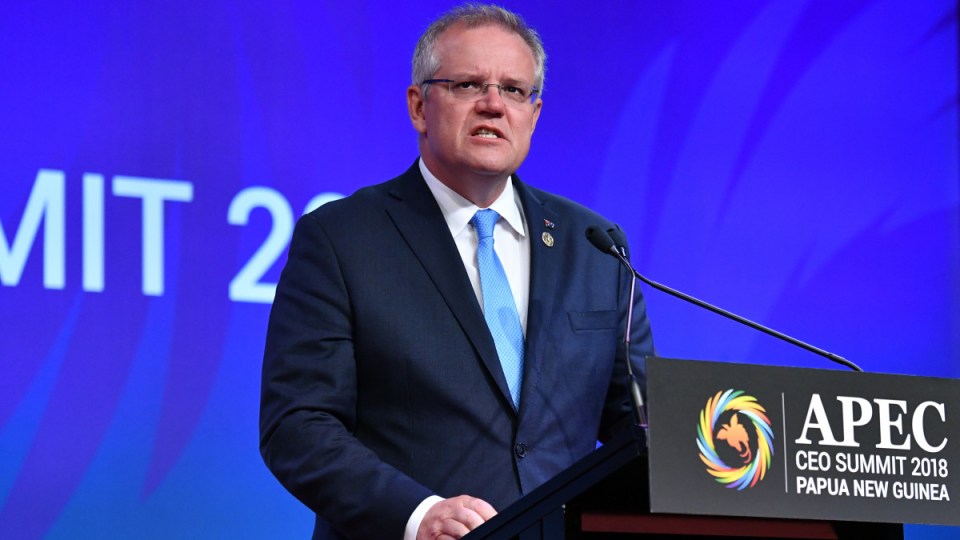 He also committed Australia to free trade and backed the World Trade Organisation, despite a push from some nations to undermine it.

Mr Morrison said Australia will work with all partners in developing Pacific nations, as Australia views the region as family.

“We want to see infrastructure investment though that is transparent, that is non-discriminatory, that is open, that upholds robust standards, deliver long term benefits, that meets genuine needs, and avoids unsustained debt burdens,” Mr Morrison said.

“It must be in the interests of the country in which you are seeking to invest.”

China has been criticised for building unnecessary projects that leave large debt burdens on small countries.

Mr Morrison also pushed back against moves from some nations to undermine the World Trade Organisation.

“The solution to perceived unfair trade practices is more likely to be found around the negotiating table than it is in re-building a tariff wall,” he said.

“We want to strengthen and improve the WTO and we will continue to pursue liberalisation wherever we can.”

After his speech Mr Morrison said he was “listening” to concerns about international trade.

“We’re just listening carefully, and we’re hearing what the various views are about what some of the frustrations are in relation to the WTO,” he told reporters.

President Xi said in his speech the WTO’s principle of special and differential treatment for developing nations should not be challenged.

He also said countries should choose their own development path.

“Blindly copying the development model of others would only be counter productive,” he said.

Mr Morrison gave a strong defence of free trade and hit back against protectionism, but said it wasn’t a shot at the United States under President Donald Trump.

“I believe the United States wants to see open, freer trade,” he said.

Vice President Pence says the US vision for the region was about “collaboration, not control”.

“Empire and aggression have no place in the Indo-Pacific – this is a region where every nation large and small must be permitted to prosper and thrive,” he said ahead of the meeting.