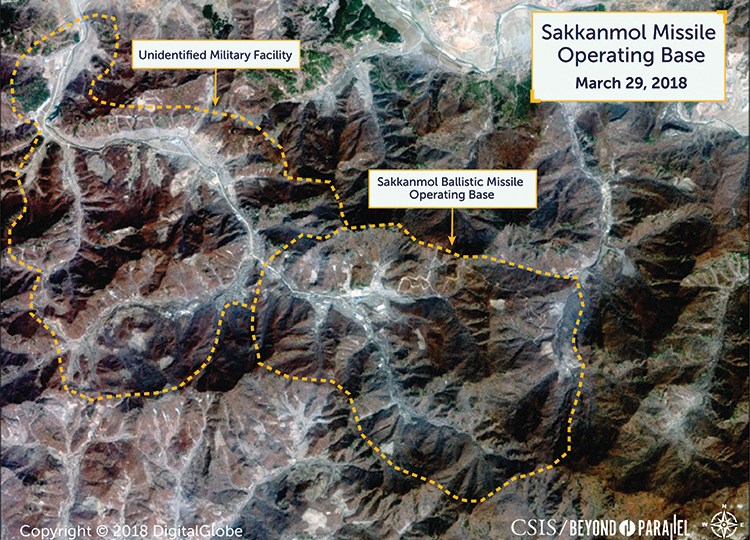 North Korea is moving ahead with its ballistic missile program at more than a dozen hidden bases identified in new satellite images, in stark contrast to assurances by US President Donald Trump.

The alleged secret ballistic missile bases were identified in a detailed study published Monday night by the Beyond Parallel program at the Washington-based Center for Strategic and International Studies.

The think tank says North Korean leader Kim Jong-un may have as many as 20 undeclared missile operating bases, despite promising to dismantle a major launch site and take steps towards denuclearisation.

The existence of the missile bases, which Pyongyang has never acknowledged, contradicts Mr Trump’s claims that his diplomacy has defused a nuclear and missile program that North Korea used to threaten the US and its allies.

A State Department spokesman responded to the Beyond Parallel findings with a written statement to the New York Times suggesting that the US government believed the sites to be dismantled.

“President Trump has made clear that should Chairman Kim follow through on his commitments, including complete denuclearisation and the elimination of ballistic missile programs, a much brighter future lies ahead for North Korea and its people,” the statement read.

The claims of the missile bases comes as Mr Trump’s signature piece of diplomacy based on his June 12 meeting with Mr Kim appears in peril, the Times reported.

While the US President told a campaign rally this month that he and Mr Kim “fell in love” after their meeting on the Singapore island of Sentosa, Pyongyang has said it would not send its chief negotiator to meet with Secretary of State Mike Pompeo in New York to plan the next summit meeting.

Joseph Bermudez, a North Korea expert and co-author of the Beyond Parallel report said the images appeared to show Pyongyang was attempting to “maximise their capabilities.”

“Any missile at these bases can take a nuclear warhead,” Mr Bermudez told the Times.

“The level of effort that North Korea has invested in building these bases and dispersing them is impressive,” he said. “It’s very logical from a survival point of view.”