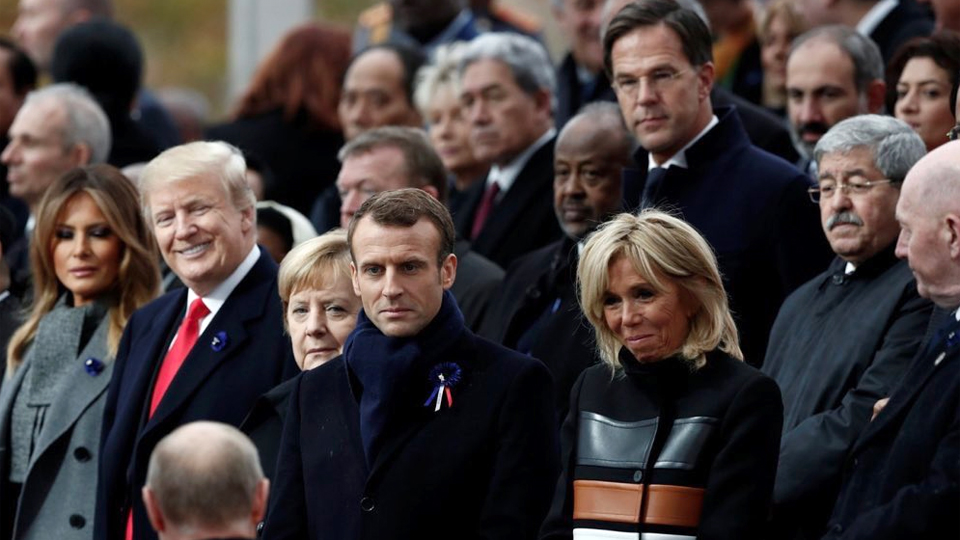 US President Donald Trump and Russian President Vladimir Putin have shared an oddly warm exchange during a ceremony to mark the centennial of the armistice commemoration in Paris.

The pair were among world leaders who gathered at the Arc de Triomphe on Monday to commemorate more than 17 million people who died in World War I.

Mr Trump was heavily criticised for smiling broadly upon seeing Mr Putin. The reaction stood out among the grim faces of nearby leaders, including French President Emmanuel Macron and German Chancellor Angela Merkel.

But what happened next sparked widespread criticism on social media with several users outraged by the exchange.

After shaking hands, Mr Putin flashed Mr Trump a thumbs-up. The US leader reciprocated with a warm pat on Mr Putin’s back.

Mr Putin’s strong-man presidential tactics have made him an outcast with many of the world’s leaders. Under him, Russian armed forces have been conclusively linked to the shooting down of MH17 in 2014 – killing all 298 on board, including 38 Australians.

The Kremlin has also been accused of using social media to spread propaganda, and of interfering in foreign elections. Mr Putin, an ex-KGB chief, has also clamped down severely on the Russian media.

Political scientist Brian Klaas wrote on Twitter: “Putin murders journalists and opponents, recently used a nerve agent to assassinate a dissident on British soil, annexed Crimea, facilitates war crimes, and attacked American democracy. This is how Trump reacted when he saw him (notice the difference with Macron/Merkel)”.

From another user: “Macron, Merkel and Trump get handshakes from Putin. But only Trump gets a thumbs-up and a friendly pat, too.”

In the past, Mr Trump has appeared to side with Mr Putin over his own intelligence agencies and ignored warnings from US national security advisers not to congratulate Mr Putin on his recent re-election.

Germany and France have leaders.
America has a traitor. pic.twitter.com/qzVc3DRfXY

Mr Trump also attracted criticism on Saturday for failing to attend a commemoration at the Aisne-Marne American Cemetery in Belleau because of rain.

Mr Trump was scheduled to visit the cemetery in Belleau, about 85 kilometres east of Paris, with his wife Melania on Saturday. But rain and low cloud prevented his helicopter from travelling to the site, the White House said.

Mr Macron used his speech on Monday at the Arc de Triomphe to warn the gathered world leaders of the dangers of nationalism – a message that appeared to be directed at Mr Trump’s “America first” theme.

“The traces of this war never went away,” he said.

“We must reaffirm before our peoples our true and huge responsibility.

“Patriotism is the exact opposite of nationalism: Nationalism is a betrayal of patriotism,” Mr Macron said, adding that, when nations put their interests first and decided “who cares about the others” they “erase the most precious thing a nation can have … its moral values.

“The lessons we draw from the Great War cannot be rancour and resentment among other nations and it cannot be allowing the past to be forgotten.”

Meanwhile, Mr Putin was late to the ceremony, missing the 11am moment that marked when the guns of the Great War fell silent.

The Russian president has a history of being late to meetings with other world leaders.

In 2014, he kept Ms Merkel waiting more than four hours and, in 2015, he was more than an hour late for a meeting with Pope Francis.

But he wasn’t the only one to miss the bells marking the armistice hour on Monday. Mr Macron and other leaders were also still on their way to the centennial site at that time.

The commemoration was the centrepiece of global tributes to honour those who died during the 1914-18 war and to commemorate the signing of the armistice that brought the fighting to an end at 11am on November 11, 1918.

The commemoration included children who read letters from German, French and British soldiers, a recital by cellist Yo-Yo Ma and a moving performance of Maurice Ravel’s Bolero.

Australian Prime Minister Scott Morrison did not travel to France for the commemorations, instead Governor-General Sir Peter Cosgrove attended. Sir Peter found himself sitting next to Mr Putin at the ceremony.

Warm exchange between Trump and Putin at armistice ceremony