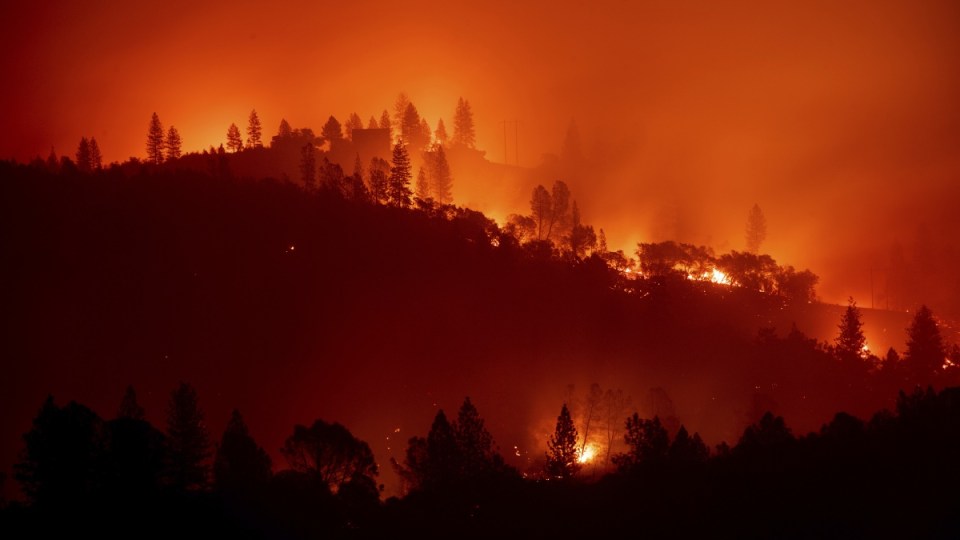 About 110 people remain missing in the massive Californian wildfires that have taken 25 lives and scorched 425 square kilometres – making the blazes the third deadliest in US history.

Butte County Sheriff Kory Honea on Saturday, local time (Sunday AEST) said the department initially had more than 500 calls about citizens who were unable to reach loved ones, but it had located many and would continue cross-checking its list with official shelters.

Sheriff Honea said that a total of 23 people had died in the fire near the town of Paradise, about 290 kilometres north-east of San Francisco.

Some of the township’s 27,000 residents who stayed behind to try to save their property or who managed to get back to their neighbourhoods in Paradise found cars incinerated and homes reduced to rubble.

Entire neighbourhoods were levelled and the business district was destroyed by a blaze that threatened to explode again with the same fury that largely incinerated the foothill town.

The flames razed more than 6700 buildings, almost all of them homes, making it California’s most destructive wildfire since record-keeping began.

Meanwhile, two more people were killed in the south, near Malibu.

The Woolsey fire, about 800 kilometres to the south, was five per cent contained on Saturday night.

More firefighters headed to the Paradise area on Saturday, with wind gusts of up to 80km/h expected, raising the risk of conditions similar to those when the fire started on Thursday.

The blaze grew to 400 square kilometres, but crews made gains and it was partially contained, officials said.

State officials put the total number of people forced from their homes by California’s fires at more than 200,000. Evacuation orders included the entire city of Malibu that is home to some of Hollywood’s biggest stars.

Horses are finally safe. My children are safe. My home is in jeopardy but… everything with a heartbeat is safe. Thank you all for your concern.

To those who insisted on still being hurtful because our political affiliation is different, you are what is wrong with the country.

Among those forced to flee were celebrities, including Lady Gaga and Kim Kardashian, who said on Twitter flames had damaged the home she shares in nearby Calabasas with Kanye West.

“Fire is now burning out of control and heading into populated areas of Malibu,” the city said in a statement online. “All residents must evacuate immediately.”

President Donald Trump issued an emergency declaration providing federal funding for fires on both ends of the state. He later threatened to withhold payments to California, claiming its forest management is “so poor.”

Trump tweeted on Saturday that “there is no reason for these massive, deadly and costly fires in California”.

Trump said “billions of dollars are given each year, with so many lives lost, all because of gross mismanagement of the forests. Remedy now, or no more Fed payments!”

California Governor-elect Gavin Newsom responded on Twitter that this was “not a time for partisanship”.

“This is a time for co-ordinating relief and response and lifting those in need up,” he said.

Paramount Ranch, which served as a set for parts of "Westworld" and numerous other Hollywood television shows and films, was burned by the Woolsey Fire https://t.co/DBwxn7iaDU

Meanwhile, the historic Western town area at Paramount Ranch in Agoura Hills, California, where productions including Westworld are shot, was destroyed.

Westworld uses the western town set to shoot its Main Street scenes.
HBO said in a statement, “Paramount Ranch was one of the locations used during seasons one and two of Westworld, in addition to the primary location at Melody Ranch in Santa Clarita.

“Westworld is not currently in production, and as the area has been evacuated, we do not yet know the extent of the damage to any structures remaining there.”

Now part of the National Park Service and open to the public, the ranch has been the site of hundreds of productions since being built by Paramount Pictures in 1927.

Among the films shot at the ranch were Caught in the Draft with Bob Hope, The Lake House with Sandra Bullock, and TV shows including The Mentalist, Weeds and Quickdraw.

Dr. Quinn Medicine Woman shot there from 1992 to 1997. Before the area was a public park, it was used for car racing in the 1950s as the Paramount Raceway, which was portrayed in the film The Devil’s Hairpin.