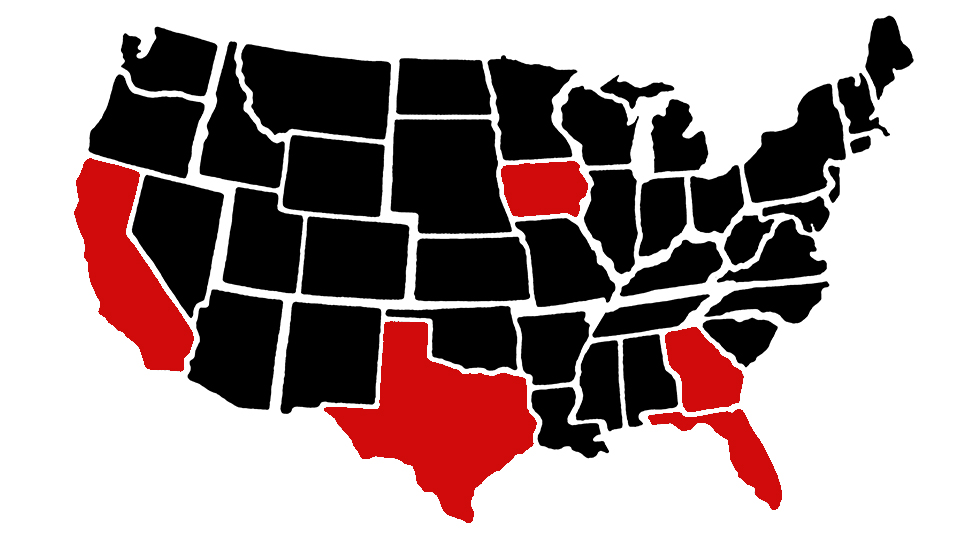 There are five key US states to watch for November 6's midterm election.

On November 6, Americans will head to the polls to deliver their verdict on the Trump administration.

Held halfway through a president’s four-year term, the stakes in this year’s midterm elections are especially high as the Democrats look to claw back control of both the House and Senate after Hillary Clinton’s stunning 2016 defeat.

A record number of women are also running for office in what is being described as a “pink wave”.

While President Donald Trump remains hugely unpopular in America’s liberal-leaning capital cities and on the world stage, the results at the midterm election are expected to come down to the wire.

The Democrats need to win just two seats in the Senate and 23 seats in the House to regain control of both chambers.

Here are the five key races to watch:

The race between Republican senator Ted Cruz and Democratic candidate Robert “Beto” O’Rourke is one of the highest stakes races and exemplifies the ideological battle between conservatives and left-wing progressives.

Texas has been a Republican stronghold since the 1990s, but urban cities such as Houston, Austin and Dallas are increasingly progressive and anti-Trump.

Democrats are hoping they can flip the senate seat, turning Texas into what is called a “purple state” where both sides of the aisle have equal support among voters.

Young and energetic, 46-year-old O’Rourke has become a star of his party while Mr Cruz is in the fight for his political life after losing his 2016 presidential bid.

Democrat nominee Stacey Abrams stands to make US history as the first female African American governor in the conservative, ruby red state of Georgia. Much like Texas, Georgia’s capital city Atlanta differs from the rest of the state and leans Democrat.

This race for governor is being framed as a test of Georgia’s political identity with Abrams’ opponent, Georgia Secretary of State Brian Kemp, a gun-toting Trumpian figure who calls himself a “politically incorrect conservative”.

The race has attracted the likes of Oprah Winfrey, who has been campaigning and door knocking for Ms Abrams in the lead up to election day. Allegations of voter suppression against Mr Kemp have also raised the stakes in Georgia.

Repeated polling shows the race is too close to call, with Ms Abrams and Mr Kemp statistically tied.

Over on the west coast, five districts in California are also considered too close to call. In the 39th District, which covers Los Angeles, Republican congressman Ed Royce’s retirement has Democrats hoping they can seize another seat in the House.

This race is interesting based on the candidates alone. Democrat Gil Cisneros is a Latino navy veteran who is largely self-funding his race after winning a $US266 million lottery ticket in 2010.

On the Republican side, Young Kim, 56, is an Asian immigrant and woman who stands to be the first Korean American woman elected to Congress.

The Republicans’ hold of the 39th District has been waning for decades thanks to demographic changes in the area, where two-thirds of the population are either Asian or Latino.

Ms Kim has tried to distance herself from Mr Trump but the race is a dead heat – a massive Democrat swing given Mr Royce won the past three elections by double digits.

Mirroring the battle between Ms Abrams and Mr Kemp in Georgia, Florida’s gubernatorial race is also a fight between two candidates who represent the beating heart of their parties.

On the Democrat side, Andrew Gillum, a 39-year-old African American mayor, is an avowed progressive, supporting marijuana legalisation and a $15 minimum wage. Meanwhile, Republican Ron DeSantis is unashamed of his close ties to Mr Trump and supports the president’s plan to build a border wall.

Mr Trump’s presence looms large in this debate. He frequently holds court from his Mar-a-Lago estate at Palm Beach and has held several rallies in Florida, using illegal immigration as a reason why voters in the Sunshine State should back a Republican.

Former president Barack Obama has also appeared in Florida this week to throw his weight behind Mr Gillum.

With black voters making up 16 per cent of Florida’s population, their turnout will be critical if Mr Gillum is to beat Mr DeSantis.

The state of Iowa is shaping up to be a bellwether state for Democrats, who are contesting two House seats and the governorship.

In the past two presidential elections, Iowa has titled Republican. The state was won by Obama by 8.5 points in 2008 but by 2016 was more red than Texas, with a high concentration of conservative, white working-class voters.

Two women are challenging Republican male congressman in Iowa as part of an unprecedented “pink wave” of women running for office.

Recent polls have Democrat Cindy Axne slightly ahead of Republican David Young in Iowa’s Third District while in the First District, Congressman Rod Blum is the subject of an ethics committee investigation for failing to declare a private business.

His challenger, Democrat Abby Finkenauer, 29, stands to become the youngest woman to ever serve in Congress if she wins on Tuesday.

The seats that will decide Trump’s next two years