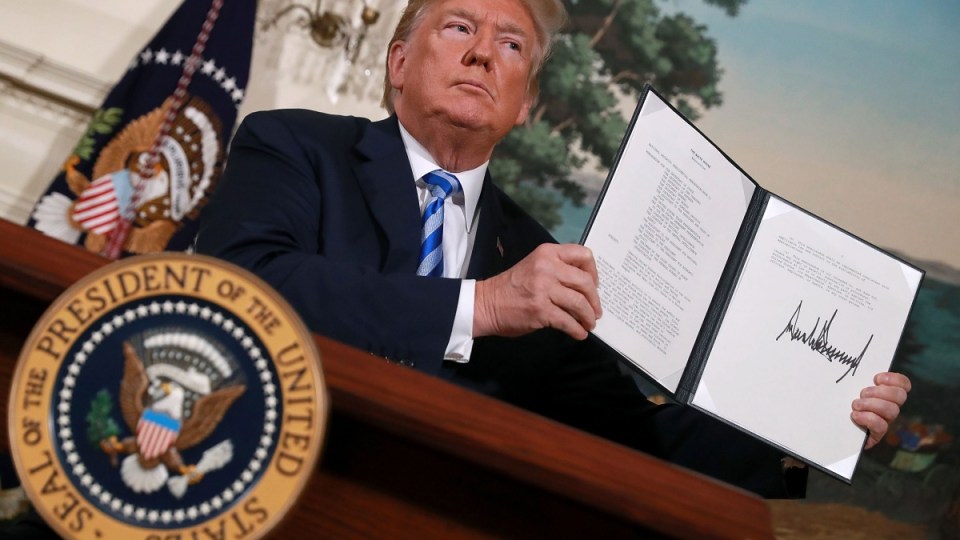 The Trump administration will on Monday reinstate tough sanctions on Iran after withdrawing from a nuclear deal brokered by Barack Obama in 2015.

The White House on Saturday (Friday local time) said the sanctions were “the toughest sanctions regime ever imposed on Iran”, and will target the country’s shipping, energy and banking sectors.

President Donald Trump in May announced the United States would withdraw from an agreement which saw Iran limit its nuclear activities in exchange for economic relief.

But Mr Trump believes the 2015 agreement is “defective at its core” and the United States withdrew from the deal earlier this year, turning its back on France, the UK, Russia, Germany and China who remain parties in the accord.

Mr Trump claims the deal has not stopped Iran from developing a ballistic missile system or from intervening in neighbouring countries including Yemen and Syria.

Iranian foreign minister Mohammad Javad Zarif, the architect of the nuclear deal, told CNN that all previous progress had been thrown out and claimed the US was “addicted to sanctions”.

The names of more than 700 individuals, businesses and aircraft will be put on the sanctions list, including major banks, shipping companies and oil exporters.

Mr Trump promoted the sanctions on Twitter on Friday with a picture of himself emblazoned with the words “sanctions are coming” – a play on the HBO series Game of Thrones.

US Secretary of State Mike Pompeo said the sanctions were “aimed at fundamentally altering the behaviour” of Iran.

The United Statess has set out 12 demands Iran must meet in order to have the sanctions lifted, including ending support for terrorism and military intervention in Syria, as well as completely halting nuclear and ballistic missile development.

Eight countries will not be penalised by the US for continuing to import Iranian oil and top US officials have moved to allay the fears of allies who rely on Iran’s oil supplies.

Italy, India, Japan and South Korea are among the countries spared.

“We want to achieve maximum pressure but we don’t want to harm friends and allies either,” US National Security Advisor John Bolton said on Wednesday.

Mr Pompeo said the administration decided to grant waivers to eight countries because they had agreed to greatly reduce their importation of Iranian oil over coming months.

The renewed sanctions have pushed the Iranian economy to the brink, with the Iranian rial losing about 70 per cent of its original value.

Trump reinstates sanctions on Iran, turning back on 2015 nuclear deal brokered by Obama