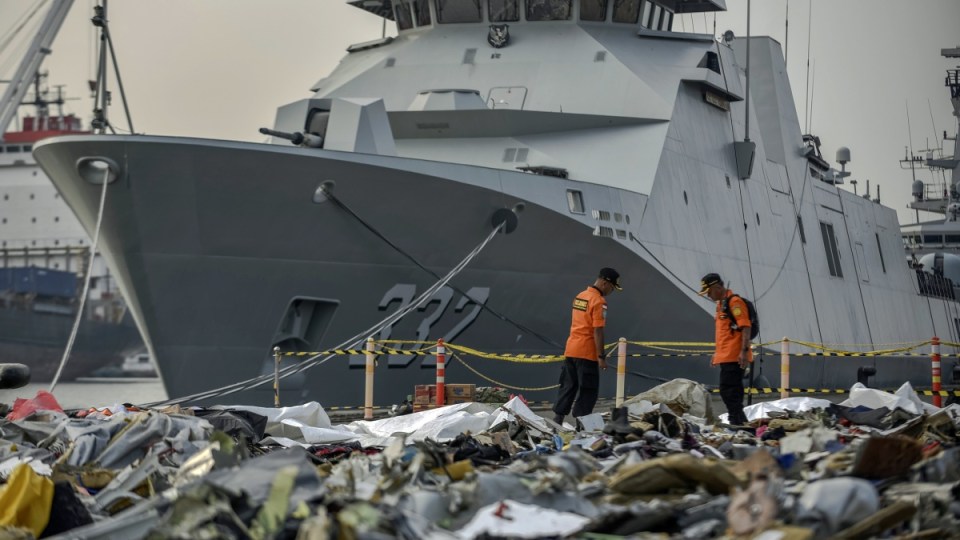 Strong tides have hampered the recovery of the black box. Photo: AP

Search teams using high-tech imaging equipment have found clothes and other personal effects littered on the bottom of the Java Sea as the hunt continues for the wreck of the ill-fated Lion Air passenger plane.

And while the object thought to be the fuselage of the crashed plane is yet to be located, Search and Rescue Agency chief Muhammad Syaugi said the sea floor findings give the search team confidence they will find the body of the aircraft.

The location of the plane’s black box flight data recorder has been identified, he said, but strong currents prevented it from being recovered.

“We saw belongings such as life jackets, pants, clothes scattered on the seabed,” Mr Syaugi said on Thursday morning (AEST).

“We believe the fuselage will be around there. We hope that our target can be found.”

The two-month-old Boeing 737 MAX 8 jet plunged into the Java Sea on Monday just minutes after taking off from Jakarta, killing all 189 people on board.

The disaster has reignited concerns about safety in Indonesia’s fast-growing aviation industry, which was recently removed from European Union and US blacklists, and also raised doubts about the safety of Boeing’s new generation 737 MAX 8 plane.

Syaugi said one of the ships with high-tech equipment being used in the search dispatched a remote-operated vehicle that recorded parts of the aircraft on the sea floor, but not the 22-metre-long object that has been detected at a depth of 32m and is believed to be the fuselage.

He said the area is about 400m from the co-ordinates where the aeroplane lost contact.

A remote-operated vehicle was sent to the black box location but the currents on the seabed were “very strong” and the vehicle was carried away, Syaugi said.

Searchers have sent 57 body bags containing human remains to police identification experts who on Wednesday said they had identified their first victim, a 24-year-old woman, from a ring and a right hand.

Anguished family members have been providing samples for DNA tests and police say results are expected within four to eight days.

Boeing experts were expected to arrive in Indonesia on Wednesday and Lion Air has said an “intense” internal investigation is under way in addition to the probe by safety regulators.

Data from flight tracking sites show the plane had erratic speed and altitude in the early minutes of a flight on Sunday and on its fatal flight on Monday.

Safety experts caution, however, that the data must be checked for accuracy against the plane’s black boxes.

Several passengers on the Sunday flight from Bali to Jakarta have recounted problems that included a long-delayed takeoff for an engine check, and terrifying descents in the first 10 minutes in the air.

Two interviewed on Indonesian TV recalled details such as a strange engine sound, a smell of burnt cables, and panicked passengers crying out for God to save them as the plane rapidly lost altitude.