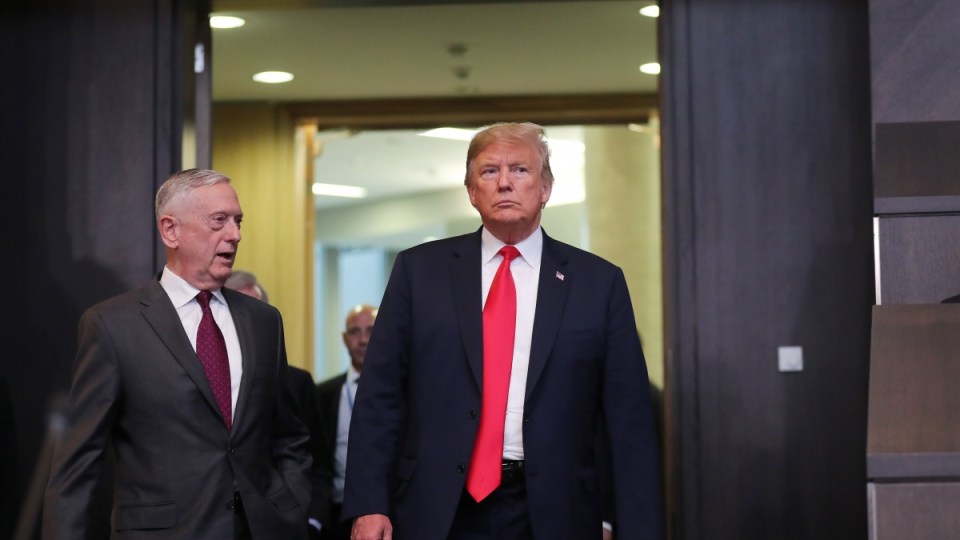 In his first negative remark toward the defence secretary, Donald Trump said James Mattis (L) may be leaving the job. Photo: AAP

US President Donald Trump says he is unsure whether Defence Secretary James Mattis is planning to step down from his post, but told CBS’ 60 Minutes in a pre-taped interview that the retired general might be, and that he regards General Mattis as “sort of a Democrat”.

“It could be that he is” planning to depart, Mr Trump said, according to an excerpt of a transcript released on Sunday (US time) before the show aired.

“I think he’s sort of a Democrat, if you want to know the truth. But General Mattis is a good guy. We get along very well. He may leave,” he said. “I mean, at some point, everybody leaves. Everybody. People leave. That’s Washington.”

It is the first time the Republican President has publicly said anything negative about General Mattis, who last month told reporters not to take seriously reports that he might be leaving.

Asked about Mr Trump’s remarks, Pentagon spokesman Colonel Rob Manning said:: “Secretary Mattis is laser-focused on doing his job – ensuring the US military remains the most lethal force on the planet.”

General Mattis’ future has become a focus of media speculation, particularly after last month’s release of a book by Watergate reporter Bob Woodward that portrayed the Defence Secretary as privately disparaging Mr Trump to associates.

General Mattis has strongly denied making any such remarks.

Mr Trump had been deferential towards General Mattis, saying on September 5 his defence chief would remain in his job.

General Mattis is not political by nature, and previously made no secret of the fact that he was not looking to become secretary of defence – or even return to Washington – when Mr Trump was elected.

The retired Marine general stepped down from the military in 2013 and took a job at Stanford University. He told his Senate confirmation hearing last year he was “enjoying a full life west of the Rockies” when the call came about the position.

Asked last month about reports he might be leaving, General Mattis said: “I wouldn’t take it seriously at all.”

Western officials privately extol General Mattis, whose standing among NATO allies has risen as they become increasingly bewildered by Mr Trump’s policies on trade and Iran and disoriented by his outreach to Russian President Vladimir Putin.

One factor thought to have darkened Mr Mattis’ prospects is this year’s arrival in the White House of Mira Ricardel, who has the powerful post of deputy national security adviser and is believed to dislike General Mattis, current and former officials have told Reuters.

He is also seen as less hawkish on Iran than Secretary of State Mike Pompeo and White House National Security Adviser John Bolton.