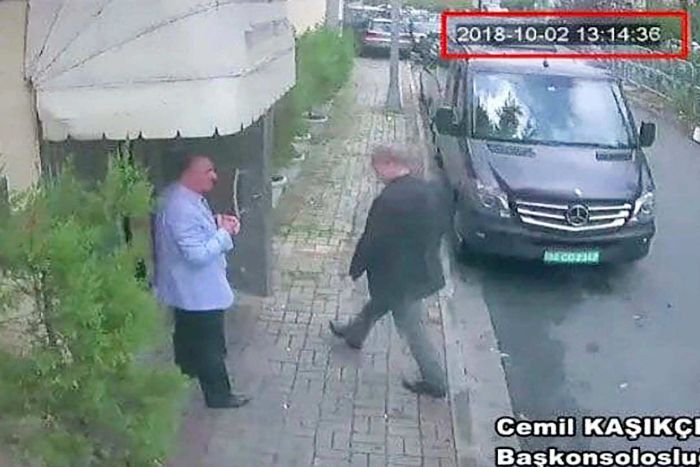 Jamal Khashoggi has not been seen since entering the consulate on October 2. Photo: AP

US President Donald Trump has vowed Saudi Arabia will be hit with “severe punishment” if it is found to have murdered missing journalist Jamal Khashoggi.

With Republican and Democratic politicians alike demanding a firm response to the alleged grisly murder inside the oil-rich kingdom’s consulate, Mr Trump sat down for an interview with US 60 Minutes amid reports that Mr Khashoggi recorded his own torture and slaying.

Mr Trump said the Saudi crown prince spoke to son-in-law Jared Kushner and denied involvement “in every way you can imagine”.

But Trump added that he was unimpressed by the claims of innocence.

Turkish officials have revealed the journalist was wearing an Apple Watch linked to his iPhone, which he left outside before entering the Saudi consulate in Istanbul on October 2.

Mr Trump said he would speak to Saudi Arabia’s King Salman about the disappearance of the Washington Post journalist after Turkish officials reportedly told the US they have proof he was killed inside the Saudi consulate.

Mr Khashoggi is known to have entered the consulate to obtain official documents for his wedding, but never left the building and has not been seen since.

Turkish officials told the Washington Post that audio and video recordings confirm the columnist was killed inside.

“You can hear his voice and the voices of men speaking Arabic,” the source said. “You can hear how he was interrogated, tortured and then murdered.”

A second person briefed on the recording said men could be heard beating Mr Khashoggi. The New York Times reported that the Turkish sources claim the Saudis brought a bone saw and a doctor of forensic medicine to dismember the body.

The security team then reportedly told staff at the Saudi consul to go home early.

Earlier, Mr Trump called it a “serious situation” and pledged that the US government would learn Mr Khashoggi’s fate.

“We’re going to find out what happened with respect to the terrible situation in Turkey having to do with Saudi Arabia and the reporter.

“And nobody knows quite yet. Nobody’s been able to put it all together. People are starting to form ideas, and as they’re formed, we’ll let you know, but it’s certainly a terrible thing.

“We intend to get to the bottom of it,” he told reporters after fellow Republicans signed a letter on Wednesday forcing his administration to investigate Mr Khashoggi’s disappearance.

US officials say they are seeking answers from the Saudi government, and are not yet accepting the Turkish government’s conclusions.

The 59-year-old Saudi journalist had been living in exile in the United States for more than a year, writing a Washington Post column that frequently criticised his country’s crackdown on dissent and its foreign policies.

Turkey and the United States on Thursday ramped up the pressure on Saudi Arabia to explain how the journalist vanished with Turkish President Recep Tayyip Erdogan urging the release of CCTV footage.

Mr Erdogan challenged the Saudi government to provide CCTV images to back up its account that Mr Khashoggi had left the consulate safely, indicating he did not find the current Saudi explanations sufficient.

“Is it possible there were no camera systems in a consulate, in an embassy?” he asked.

Meanwhile, Turkey’s state-run news agency Anadolu is reporting a delegation from Saudi Arabia has arrived in Turkey as part of the investigation into his disappearance.

The mystery is not without irony. As a supporter of the Muslim Brotherhood, Mr Khashoggi represents a Middle East movement Mr Trump has made no secret he despises. Likewise, the journalist worked for the Post, one of the US media outlets the president loves to hate.

On top of that, the investigation has put both Turkey and the US on the same side, at least in this instance, after two years of tensions focused on the imprisonment of American preacher Andrew Brunson, who was freed late last week and visited Mr Trump in the Oval Office over the weekend.

Saudi Arabia has called the allegation it abducted or harmed Mr Khashoggi “baseless”.  However, it has offered no evidence to support its claim he left the consulate and vanished despite his fiancée waiting outside.

The disappearance has also sparked Sir Richard Branson and Virgin Group to sever their business ties with the Kingdom of Saudi Arabia and its leader, Crown Prince Mohammed bin Salman.

Speaking to reporters, Mr Trump said he saw no reason to block Saudi purchases of US arms or its investments in the US despite the journalist’s case, saying the Gulf nation would just move its money into Russia and China.

“They’re spending $US110 billion ($155 billion) on military equipment and on things that create jobs … for this country,” he said.

“I don’t like the concept of stopping an investment of $US110 billion into the United States, because you know what they’re going to do? They’re going to take that money and spend it in Russia or China or someplace else,” he said.

“If it’s found that they murdered a journalist, that will hugely change our relationship,” Senator Bob Corker, chairman of the Senate Foreign Relations Committee, told reporters.

“There will have to be significant sanctions placed at the highest levels.”

According to the Washington Post, Mr Trump has spoken previously about his “warm relationship” with King Salman, who entertained the President when he visited Riyadh in 2017 on his first overseas trip after his 2016 election win.