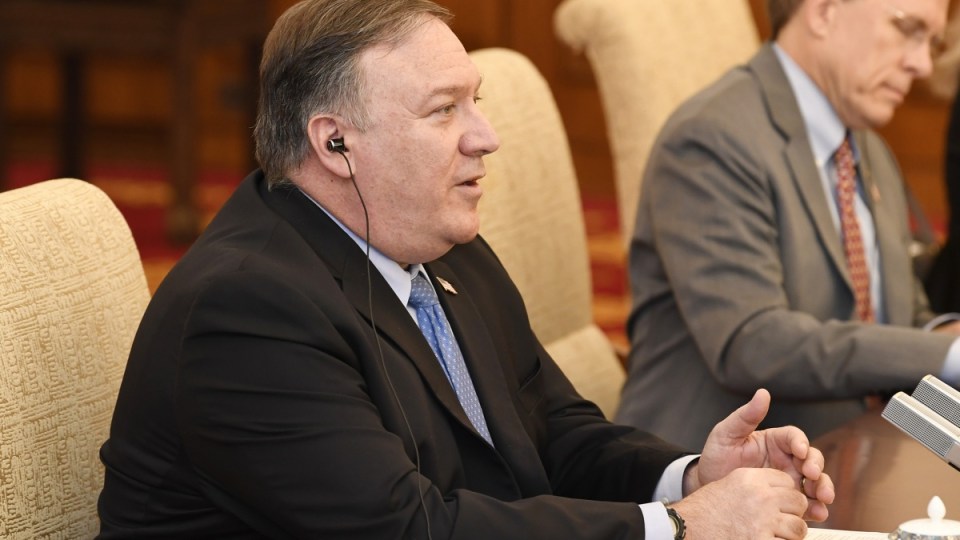 US Secretary of State Mike Pompeo during his visit to China. Photo: Getty

US Secretary of State Mike Pompeo on Monday hailed “significant progress” in talks with North Korean leader Kim Jong Un at the weekend and said the sides were “pretty close” to settling details for another summit between Kim and President Donald Trump.

However, experts questioned what Pompeo had achieved on Sunday on his fourth visit to Pyongyang this year.

They said the North Korean leader appeared simply to be repackaging and dragging out past pledges.

However, Pompeo declined to say whether there had been any forward movement on North Korea’s offer to allow inspectors to visit its Yongbyon site, which produces fuel for nuclear weapons.

North Korea has said an inspection of that site would be allowed if the United States took “corresponding measures,” of which there has been no sign.

In May, North Korea blew up tunnels at Punggye-ri and called this proof of its commitment to end nuclear testing, but a senior White House official accused Pyongyang at the time of breaking a promise to allow experts to witness dismantlement of the site.

Pompeo did not say when inspectors would be allowed to Punggye-ri or if they would be Americans or representatives of international nuclear bodies.

“There’s a lot of logistics that will be required to execute that,” Pompeo told a news briefing in Seoul before leaving for Beijing.

Experts said the offer on inspections amounted to dressing up of an old, unfulfilled pledge as a new concession.

“The real takeaway from this Punggye-ri pledge is that Kim has mastered the art of milking a single cosmetic concession for months to burn clock,” Vipin Narang, an associate professor of political science at the Massachusetts Institute of Technology, said on Twitter.

We are still talking about Punggye-ri and Sohae six months after he pledged to dismantle them. Brilliantly selling the same horse twice.”

Even so, Pompeo said both sides were “pretty close” to an agreement on the details of a second summit, which Kim proposed to U.S. President Donald Trump in a letter last month.

Trump and Kim held a historic first summit in Singapore on June 12 at which Kim pledged to work toward denuclearisation of the Korean peninsula.

However, his actions have fallen short of Washington’s demands for a complete inventory of its weapons and facilities and irreversible steps to give up its arsenal.

Pompeo told South Korean President Moon Jae-in on Sunday his latest trip to Pyongyang was “another step forward” to denuclearisation, but there were “many steps along the way”.

Pyongyang’s official KCNA news agency was upbeat. It said on Monday Kim lauded his talks with Pompeo and “explained in detail the proposals for solving the denuclearisation issue”.

“Kim Jong Un expressed satisfaction over the productive and wonderful talks with Mike Pompeo at which mutual stands were fully understood and opinions exchanged,” KCNA said.

North Korea had denounced Pompeo on his previous trip to Pyongyang in July for making “gangster-like demands”.