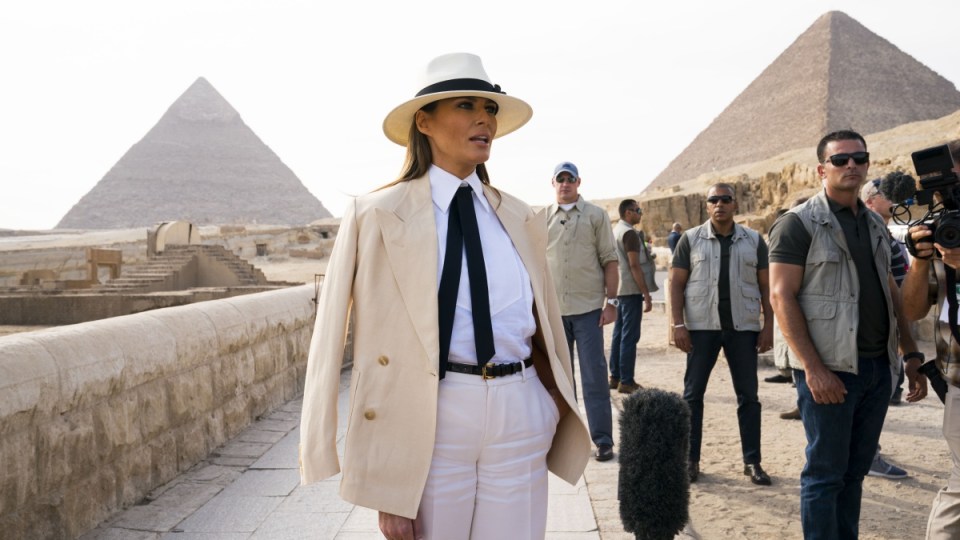 Melania Trump who is visiting the pyramids in Egypt previously said she wished "people would focus on what I do, not what I wear”. Photo: New York Times

No one can say US first lady Melania Trump doesn’t understand the power of an image.

Standing in front of one of the best known but most enigmatic monuments of the ancient world, the Great Sphinx, Mrs Trump – one of the most mysterious first ladies in modern times – agreed to take questions from a group of journalists.

Mrs Trump – wearing another white hat – used the symbolic backdrop as a moment to discuss her six-day trip to Africa, including whether any of her hosts had brought up the disparaging comments her husband, President Donald Trump, has reportedly made about African countries.

“Nobody discussed that with me,” she said of her hosts in Ghana, Kenya, Malawi and Egypt last week. Of Mr Trump, she added: “I never heard him saying those comments.”

When asked about the President’s claim, made in response to the accusations of sexual assault against Brett Kavanaugh, that it was a “very scary time” for men, Mrs Trump walked a line between saying victims needed to be heard and supporting Mr Kavanaugh, whom she called highly qualified to join the US Supreme Court.

“I’m glad Dr Ford was heard,” Mrs Trump said of Christine Blasey Ford, one of the accusers. “I’m glad Judge Kavanaugh was heard, that the FBI investigation was done.”

She added: “We need to help all of the victims no matter what kind of abuse they had. I am against any kind of abuse or violence.”

When asked if she believed Dr Ford, she seemed to deflect the question: “I will move on that.”

Of the President’s Twitter habits, “I don’t always agree what he tweets and I tell him that,” she said.

“I give him my honest opinion and honest advice. Sometimes he listens, sometimes he doesn’t. I have my own voice and my opinions, and it’s very important to me that I express how I feel.”

When asked if she ever tells the President to put away his phone, Mrs Trump quickly replied, “Yes!”

The first lady appeared irritated when asked about the white pith helmet, a symbol of British colonial rule, that she had worn in Kenya.

“I wish people would focus on what I do, not what I wear,” she said.

(Mrs Trump made her “Be Best” initiative a focus of the trip.)

She then posed for photographs in front of the pyramids, tipping her hat down against the wind as dancers whirled and dramatic music played in the background.

Does Melania Trump ever tell the President to put away his phone? ‘Yes’