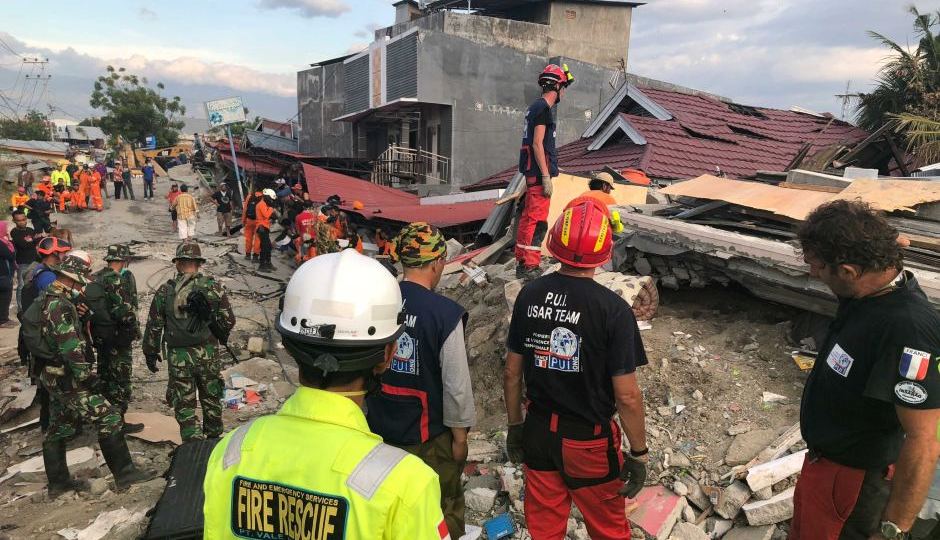 A French search team investigates reports of knocking from under rubble at Balaroa. Photo: ABC News

For tens of thousands of Indonesia’s earthquake and tsunami survivors, home for the next few months, if not years, will be one of the many camps springing up all over the region.

Those who lived through the disaster have made their way to camps like one at Palu’s airport, and even those on other islands to which many survivors have been evacuated.

In the worst-affected areas, the destruction is so complete that the true death toll will likely never be known.

On Sunday, disaster agency spokesman Sutopo Purwo Nugroho said 1763 people are confirmed dead and 65,000 homes have been damaged and destroyed.

Officials have not even tried to guess the number of people missing as they assess villages obliterated when the quake caused loose soil to liquify, sucking houses into deep mud and burying occupants.

But even after the official week of searching for survivors ended, some emergency workers have refused to give up.

A French search-and-rescue team is investigating reports of a knocking sound from a cavity under a collapsed home.

It’s a long shot, but their high-tech gear has detected a possible sign of life and they want to investigate.

“It could be movement,” says one of the workers, making a heartbeat motion.

At first there is resistance from officials, but eventually permission is granted to keep looking until six o’clock.

The search goes well into the night but once again they find no-one alive.

The Australian government has announced an additional $4.5 million in aid to assist Indonesia, bringing Australia’s total assistance to more than $10 million.

Aid agencies are now operating at full capacity and a team of Red Cross workers searching Palu’s suburbs for those in need of medical care has been at it non-stop for nine days.

It does not take long to find the injured.

One woman has a fractured arm and has been waiting until now for help.

Another, older woman under a tarpaulin is in worse shape and needs a stretcher. She is bundled up and carried to the ambulance.

They both end up at a makeshift clinic that was set up minutes earlier and already people are flocking in for medical attention.

“I’ve taken my brother here to have a check. He has a cough and was hit by a brick during the quake,” said Nurul Mazida, holding a baby.

One by one the sick and wounded are either taken for further medical care or patched up and sent on their way.

Hasbi was injured when the tsunami hit.

“I was wounded by the rising ocean. I went into my house, when it suddenly filled with water. My cupboard fell and blocked the door, I couldn’t get out,” he said.

Medical worker Abdi Rahmadi, who went to work minutes after the quake hit, had no contact with his family for the first three days and did not know they had survived.

But he worked on regardless, helping others in urgent need.

“The situation was pretty scary. People kept asking for help. Hundreds of people,” he said.

“This is a calling. I wanted to help other victims who got hit by the earthquake.”

Even in the areas untouched by the disaster, there are problems, with most commerce in Palu remaining at a standstill and garbage piling up on the streets in some areas.

The stench is unbearable and the threat of an outbreak of disease is ever present.

Still, there is a faint heartbeat returning to the city and some of the surrounding areas.

At the market, the price of most goods has tripled.

But fishmonger Safruedin is offering fish at a quarter of the normal price.

“Because if I don’t sell it, I will feel sorry for the people who have nothing,” he said.

Armed soldiers are now everywhere in a city that came very close to a complete collapse of social order.

Looting and robberies are under control now that tension over the next meal or drink of water has eased.

Roads are improving, petrol queues are shorter, electricity is returning and telecommunications are better.

It’s a long way from normal, but it’s a start.