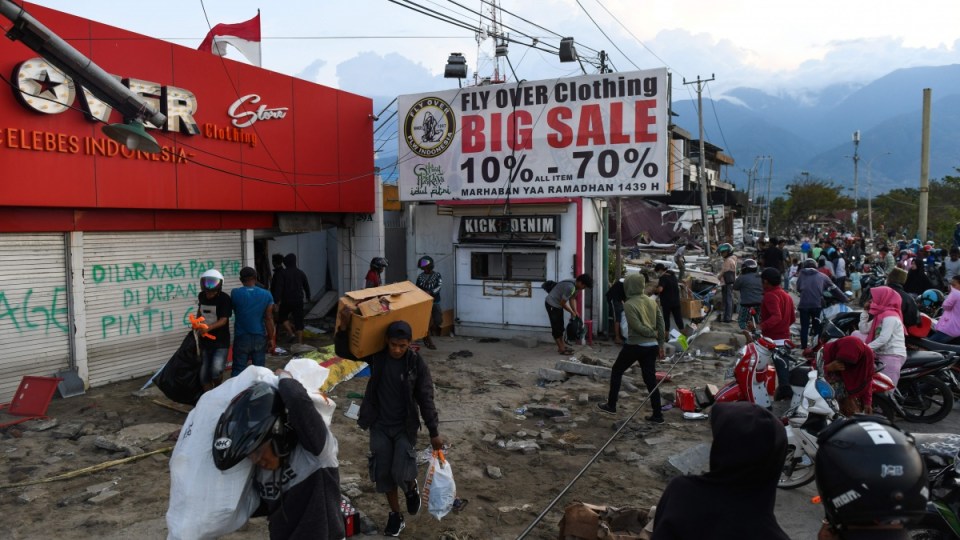 Residents in the earthquake and tsunami-ravaged city of Palu have turned to looting due to a shortage of necessities such as food, water and petrol, local authorities have reported as the death toll from the disaster rose to more than 1200.

Many have risked their safety to enter a badly damaged shopping mall in the devastated city, amid ongoing aftershocks – taking anything they can get their hands on.

Desperation on the ground continues to mount as aid is slow to reach the community four days after the disaster, which has so far killed 1234 people, hit the Indonesian island of Sulawesi.

Looters have taken advantage of the chaotic situation on the ground, scrambling past crumbling barricades, flooded roads and broken glass to get their hands on food, medicine and petrol.

The Indonesian government has allocated 560 billion rupiah ($37.58 million) for disaster recovery, however access to the worst-affected areas is still limited by heavily damaged roads, and large machinery needed to clear away rubble is yet to arrive.

However, he since released a statement on Twitter, saying he had been widely misunderstood and that he was referring to compensation for businesses that had been looted, and was not encouraging people to start looting.

Police in the area had been attending cases of looting from malls and minimarkets, however they said many people had no choice.

“But the main issue is that they’re in a panic because of the lack of logistics, food and petrol.”

Indonesia’s state-owned oil and gas corporation in Jakarta announced it was sending tanks with thousand of litres of petrol and gasoline – crucial in keeping generators in local hospitals running due to unstable electricity in the region.

However, until the delivery arrives, residents needing petrol are faced with a choice between looting or waiting in queues hundreds of metres long.

“Following the disaster, roads and bridges have been destroyed, communication lines are down, and landslides have left many areas inaccessible,” she said in a statement.

“As a result, it has been difficult to get information about the situation on the ground out, and to get aid and people in.”

Indonesia said it would accept offers of international aid, having shunned outside help earlier this year when an earthquake struck the island of Lombok.

Most of the casualties have been in Palu, the main city in the disaster zone, where rescuers are hunting for victims in the ruins.

The quake triggered tsunami waves as high as six metres that smashed into the city’s beachfront.

Nearly 60,000 people have been displaced and are in need of emergency help, while thousands have been streaming out of the stricken areas.