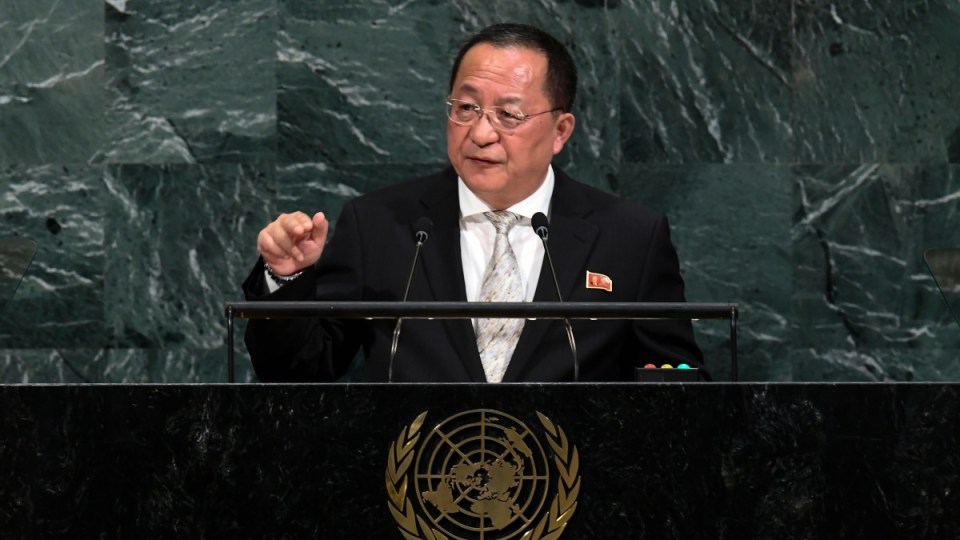 Ri Yong-Ho has told the United Nations more support is needed from the US. Photo: Getty

North Korea’s foreign minister has told the United Nations there is no way the country would give up its nuclear weapons unilaterally while sanctions remain in place.

Ri Yong-ho told the world body’s annual General Assembly that continued sanctions were deepening its mistrust of the United States.

He said that North Korea had taken “significant goodwill measures” in the past year, such as stopping nuclear and missiles tests, dismantling the nuclear test site and pledging not to proliferate nuclear weapons and nuclear technology.

“However, we do not see any corresponding response from the US,” he told world leaders in New York.

“Without any trust in the US there will be no confidence in our national security and under such circumstances there is no way we will unilaterally disarm ourselves first.”

While Mr Ri reprised familiar North Korean complaints about Washington’s resistance to a “phased” approach to denuclearisation under which North Korea would be rewarded as it took gradual steps, his statement appeared significant in that it did not completely reject unilateral denuclearisation as Pyongyang has done in the past.

North Korea has been seeking a formal end to the 1950-53 Korean War, but the United States has said Pyongyang must give up its nuclear weapons first.

“The US insists on the ‘denuclearisation-first’ and increases the level of pressure by sanctions to achieve their purpose in a coercive manner, and even objecting to the ‘declaration of the end of war,'” Mr Ri said.

“The perception that sanctions can bring us on our knees is a pipe dream of the people who are ignorant about us. But the problem is that the continued sanctions are deepening our mistrust.”

Mr Ri made no mention of plans for a second summit between Kim Jong-un and Donald Trump that the US leader highlighted at the United Nations earlier in the week.

The minister instead highlighted three meetings between Mr Kim and South Korean leader Moon Jae-in in the past five months and added: “If the party to this issue of denuclearisation were South Korea and not the US, the denuclearisation of the Korean peninsula would not have come to such a deadlock.”

Even so, the tone of Mr Ri’s speech was dramatically different from last year, when he told the UN General Assembly that targeting the US mainland with North Korea’s rockets was inevitable after “Mr Evil President” Trump called Kim a “rocket man” on a suicide mission.

Trump says he ‘fell in love’ with Kim

While Mr Ri spoke of a growing mistrust with the US, Mr Trump told supporters at a rally in West Virginia that he “fell in love” with Mr Kim during their historic summit in Singapore.

“No really. He wrote me beautiful letters. They were great letters. And then we fell in love,” Mr Trump said.

“I was really being tough and so was he. And we were going back and forth, and then we fell in love. OK?”

Mr Trump was likely referring to the letters he received from Mr Kim that his White House spokeswoman Sarah Sanders described at the time as “a very warm, very positive letter.”

“Now they will say, ‘Donald Trump said they fell in love. How horrible is that? So unpresidential,'” Mr Trump told the rally.

“But instead of having 10,000 people outside trying to get into this packed arena, we’d have about 200 people standing there. It’s so easy to be presidential.”

His comments followed his praise for Mr Kim at the UN earlier in the week.

Mr Trump, who last year threatened to “totally destroy” North Korea and called Mr Kim “little rocket man” during a fiery speech to the UN, heaped praise on Mr Kim for his courage in taking steps to disarm, but said much work still had to be done and sanctions must remain in place until North Korea denuclearises.

On Wednesday, Mr Trump said he did not have a time frame for this, saying “If it takes two years, three years or five months — doesn’t matter.”

China and Russia argued that the UN Security Council should reward Pyongyang for steps taken.

However, US Secretary of State Mike Pompeo told the UN Security Council on Thursday that “enforcement of Security Council sanctions must continue vigorously and without fail until we realise the fully, final, verified denuclearisation.”

The Security Council has unanimously boosted sanctions on North Korea since 2006 in a bid to choke off funding for Pyongyang’s nuclear and ballistic missile programs.