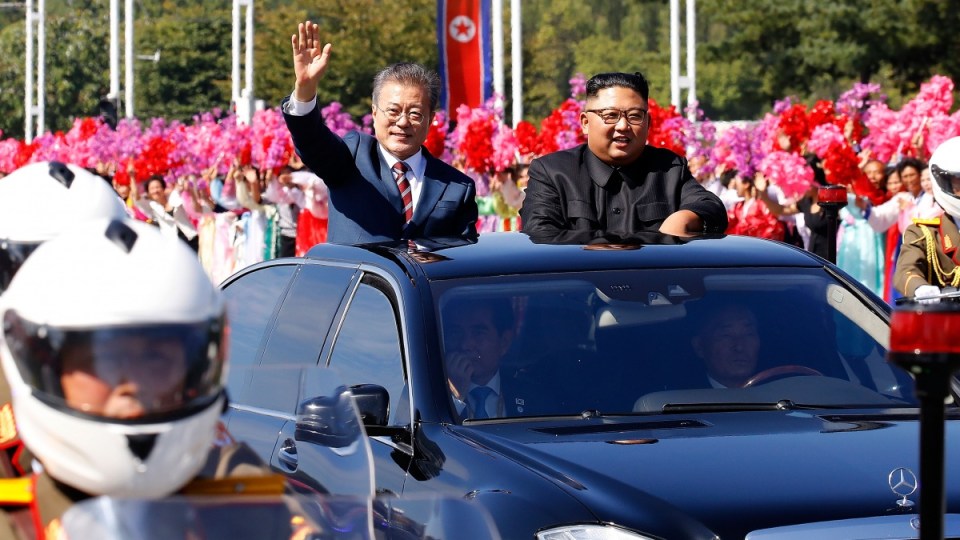 North Korean leader Kim Jong-un has greeted Moon Jae-in with hugs and smiles as the South Korean president arrived in Pyongyang for a third summit between the two, aimed at advancing faltering nuclear talks and officially ending the Korean War.

The inter-Korean summit will be a litmus test for another meeting Mr Kim has recently proposed to US President Donald Trump, giving clues to whether Mr Kim is serious about denuclearisation, a commitment he made at their first encounter in June.

Mr Trump has asked Mr Moon to be “chief negotiator” between himself and Mr Kim, according to Mr Moon’s aides, after Mr Trump cancelled a trip to Pyongyang by his secretary of state last month.

Washington wants to see concrete action toward denuclearisation by North Korea before agreeing to a key goal of Pyongyang – declaring an end to the 1950-53 Korean War.

Underscoring the challenges ahead, North Korea’s official Rodong Sinmun newspaper said on Tuesday “the responsibility falls squarely on the United States” for the stalled nuclear discussions.

Mr Moon, himself the offspring of a family displaced by the war, arrived at the North’s capital of Pyongyang about 10am, greeted by Mr Kim, his wife Ri Sol-ju and other top North Korean officials, before inspecting a large honour guard and a military band.

The leaders were all smiles as they hugged and chatted with each other.

They will sit down for formal talks after lunch, which will be followed by a musical performance and welcome dinner, a South Korean official said.

On Wednesday, Mr Moon and Mr Kim are expected to unveil a joint statement, and a separate military pact designed to defuse tensions and prevent armed clashes, before Mr Moon returns home on Thursday.

This week’s summit comes as the US presses other countries to strictly observe UN sanctions aimed at choking off funding for Pyongyang’s nuclear and ballistic missile programs, amid growing evidence that North Korea is continuing nuclear weapons development.

US Ambassador to the United Nations Nikki Haley on Monday accused Russia of “cheating” on UN sanctions on North Korea.

Mr Moon is hoping to engineer a proposal that combines a concrete framework for the North’s denuclearisation and a joint declaration ending the Korean War, Seoul officials said.

The war ended with an armistice, not a peace treaty, leaving US-led UN forces including South Korea technically still at war with the North.

But US officials remain “unenthusiastic” about declaring an end to the war without any substantial action toward denuclearisation from the North, Seoul officials said.