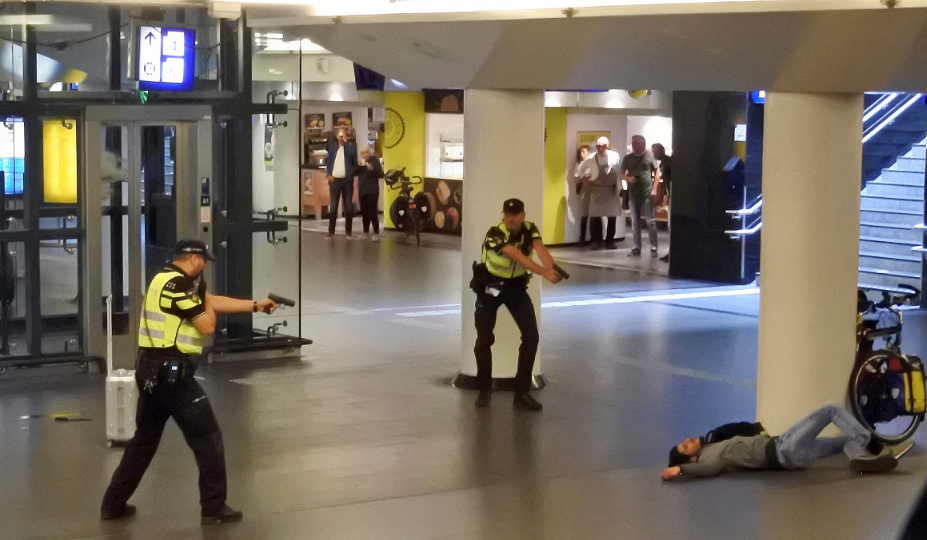 Dutch police keep their guns trained on the wounded suspect, who was shot after stabbing two US tourists in Amsterdam's main station. Photo: AAP

A 19-year-old Afghan citizen who was shot and detained after a double stabbing at the Dutch capital’s main railway station had a “terrorist motive,” Amsterdam authorities say.

The man allegedly stabbed two American tourists on Friday at Amsterdam’s Central Station before police shot and wounded him.

Dutch police say he holds a residency permit from Germany, where his home was searched.

“Based on the suspect’s first statements, he had a terrorist motive,” Amsterdam’s city government said in a written statement on Saturday.

Police have not elaborated on the suspect’s admissions.

The wounded Americans were recovering in a hospital from what police termed serious but not life-threatening injuries. Their identities have not been released.

The suspect, identified only as “Jawed S” in line with privacy rules in the Netherlands, also remains hospitalised.

Dutch Prime Minister Mark Rutte confirmed on Twitter that the investigation was focused on Saturday on extremist ideology.

Amsterdam City Hall said German authorities seized data storage devices from the suspect’s home that would be analysed as part of the investigation.

The suspect was scheduled to be arraigned during a closed-door hearing with an investigating judge on Monday.

Dutch officials did not disclose the charges he could face.

A statement issued late on Friday by Amsterdam’s city council said the Americans did not appear to have been victims of a targeted attack.

Amsterdam authorities also said on Friday that it appeared from initial inquiries that the victims weren’t chosen for a clear reason.

The local government said on Saturday it had no immediate plans to beef up security in the city, saying the swift action by police “shows that Amsterdam is prepared for this kind of incident.”

A passerby’s dramatic photo showed two police officers pointing guns at a man in blue jeans and sneakers lying on the ground inside a train station tunnel.

Ambassador Pete Hoekstra issued a written statement saying US Embassy officials had been in touch with the victims or their families.

“We wish them a speedy recovery and are working closely with the City of Amsterdam to provide assistance to them and their families,” Hoekstra said.

Central Station is a busy entry and exit point for visitors to Amsterdam, with regular trains linking it to the city’s Schiphol Airport.

Friday is one of the busiest days of the week for train travel as tourists arrive for the weekend.

The station is patrolled by armed police and other security staff.