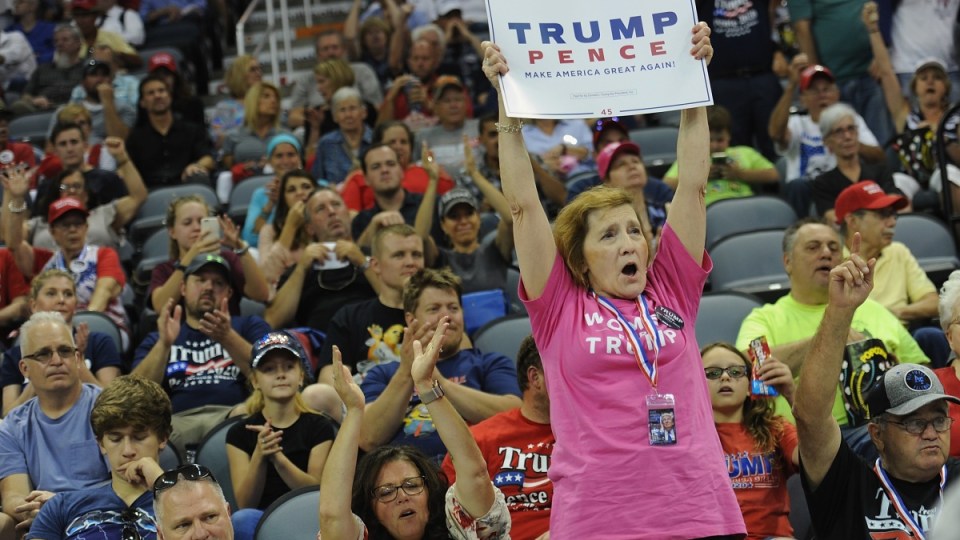 The atmosphere at Trump's Evansville rally was electric. Photo: Getty

Deep in the US state of Indiana, past the endless fields of corn and butterweed and evangelical billboards, there’s a sold-out concert. You’re invited.

Beer is flowing, the hot dogs are delicious, and they’re playing your favourite songs. The merchandise is great, and the crowd? Best crowd you’ve ever seen. Young, old, rich, poor, black, white — it doesn’t matter. Everyone is here to celebrate.

The people are dancing in their seats, waving banners and posters, and the energy in the stadium is electric.

Welcome to a Trump rally. A key campaign weapon for the 45th President of the United States as he fights for critical Senate seats before the November mid-term elections.

The JumboTron screen above the crowd shows a giant image of Mr Trump in front of a billowing American flag and beneath him, his infamous slogan: “Make America Great Again”.

A carefully crafted catalogue of songs such as Journey’s Don’t Stop Believin’ and The Rolling Stones’ Let’s Spend the Night Together work the rally into a lather.

It’s not so different from the atmosphere of an AFL or NRL grand final.

This is a pep rally for a state which has been decimated by a downturn in manufacturing and Mr Trump sells the crowd a vision of America as a revered superpower with a booming economy.

His American dream is an illusion. The country has never been more confused or divided over where it stands on the world stage, where it’s headed or what its identity is.

The rally is an illusion, too.

This correspondent, nestled amongst the giant crowd without a spec of Trump merchandise, was approached by a female secret service agent just minutes after entering the stadium.

“Would you like to stand in the VIP section?” she asked, motioning to a fenced-off area at the front of the mob, just metres from the President’s podium.

As the VIP section filled with those lucky enough to be carefully selected from the crowd, the Trump faithful behind the barrier bemoaned the fact they’d waited in the searing sun for hours, waiting to get a glimpse of their hero in the flesh, only to be disregarded.

Mr Trump takes the stage to wild cheers and the people shout “I love you”, as he tells them this is an incredible time for their country, that he is putting America first and seeing an end to people ripping them off and pushing them around.

He is their President, their saviour, the coach of their all-star football team and their rock god all rolled into one.

It barely registers that this is a political event until the Republican candidate for the senate seat of Indiana — the whole reason this rally has been called — takes the stage to implore the people in the crowd to vote for him.

He appears briefly before it’s back to President Trump who disjointedly switches between congratulating golfer Tiger Woods on his comeback (he’s a winner and the President loves winners), bashing “the failing New York Times” and eventually touching on the country’s dazzlingly low unemployment levels.

When Mr Trump acts like the President of the United States, championing the tax cuts he has passed or the fact consumer confidence is on the up, the eyes in the audience glaze over. This is not what they came for.

The people packing the Ford Centre in Evansville are the antithesis of Trump and he is all too aware of this.

Hardworking, blue collar and Christian, this small town made of up coal miners and steelworkers is a world away from the flashy Fifth Avenue which Mr Trump prowled for so many years as an ambitious real estate developer.

Scroll through the photos below: 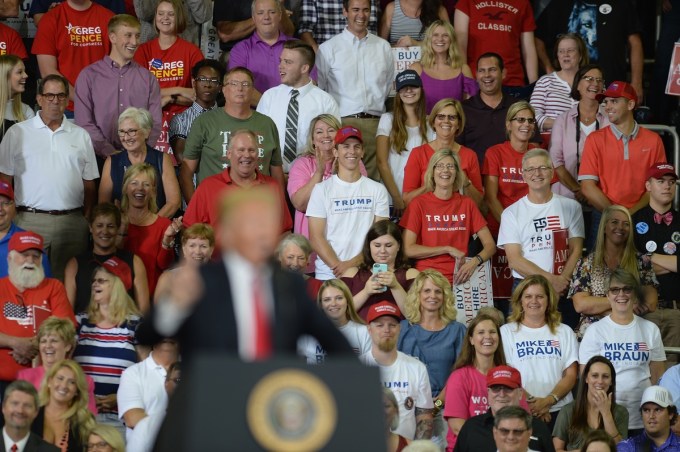 The VIP section of the audience is carefully selected. 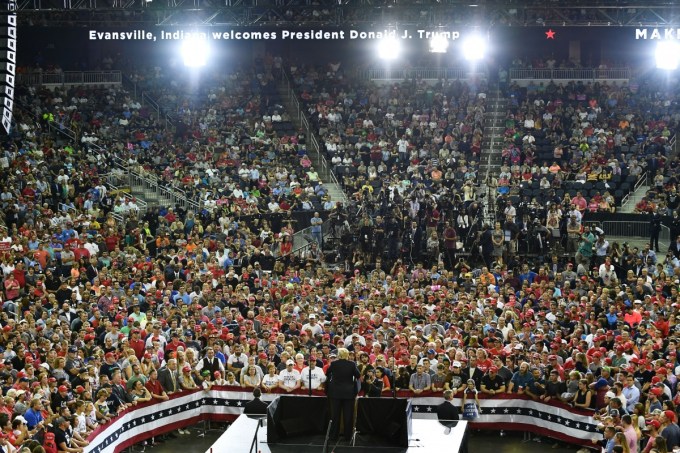 The President sure knows how to pull a crowd. Photo: Getty 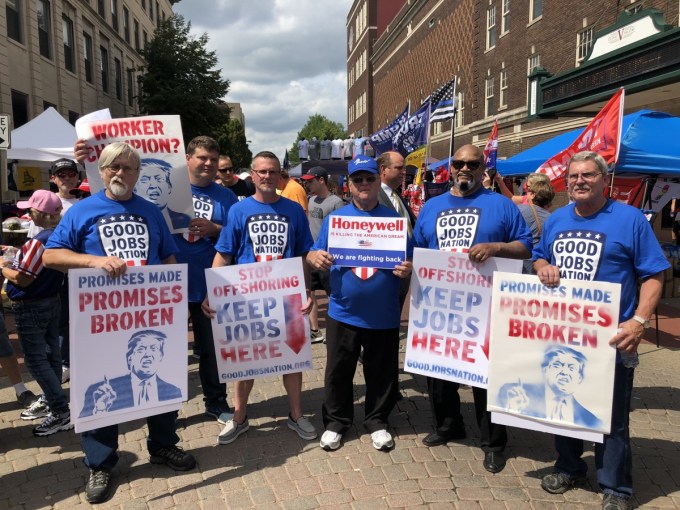 Not everyone there was a supporter. 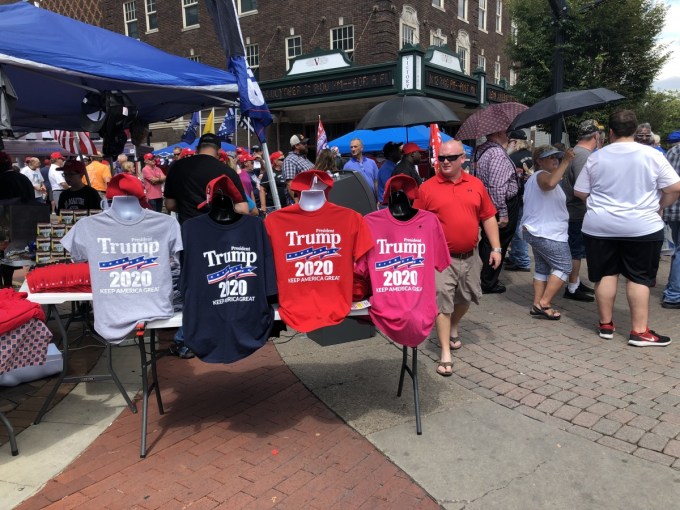 Trump is working to get the Republican candidate for Indiana elected. 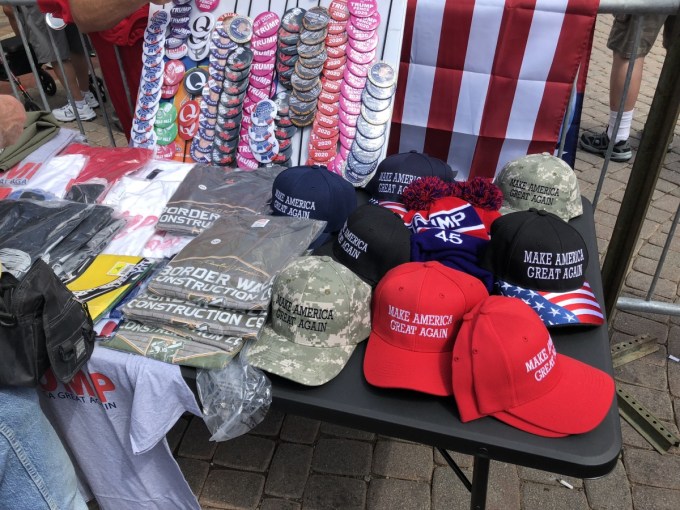 Merchandise galore was available outside the stadium. 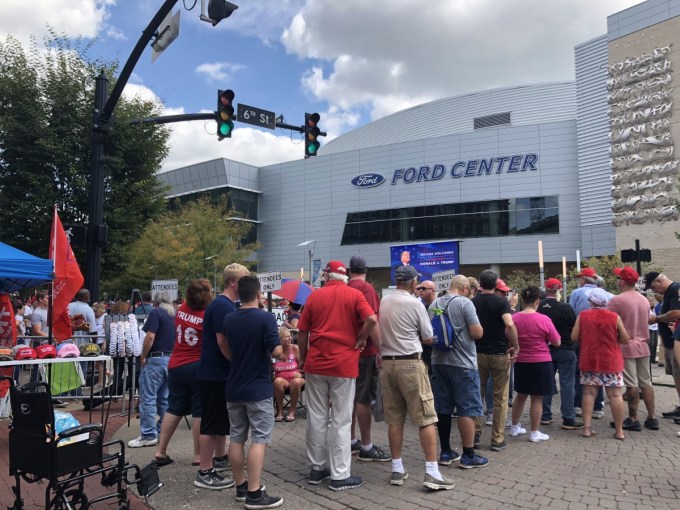 The rally was held at the Ford Centre in Evansville, Indiana.

While telling a long-winded anecdote about how he became President, Mr Trump stops mid-sentence when he mentions his desk nestled far above the pavements of Manhattan.

“I haven’t been to that office since — I don’t care about that stuff any more. I only care about doing what’s good for us,” he crooned, telling his disciples repeatedly how much he prefers blue-collar workers over white-collared ones.

But the crowd don’t care. Mr Trump is their hero, the master of ceremonies at this circus where the media and Hillary Clinton remain the enemy of the American people.

As the crowd poured out of the stadium with their Make America Great Again hats and banners purchased from one of the dozens of merchandise stands outside, they barely notice the homeless man sleeping on a bench among the dozens of disregarded deck chairs and overflowing bins.

The disciples jump back into their cars, high on the American Dream and the fact that, maybe just for tonight, team USA is winning like the good old days.