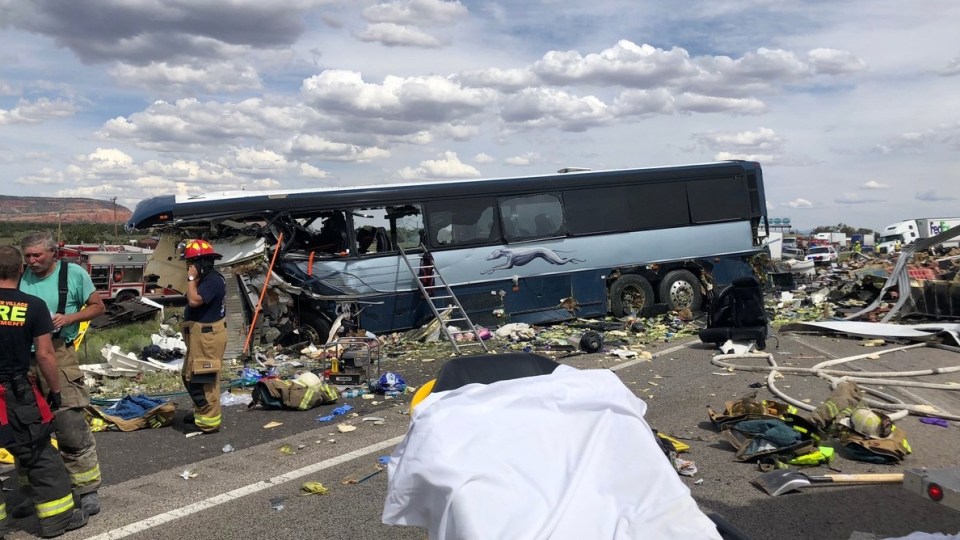 Multiple deaths and injuries are being reported after a bus crashed into a semi-trailer in New Mexico. Photo: Twitter

New Mexico State Police have confirmed seven people have been killed and dozens more injured after a semi-trailer truck collided with a Greyhound bus carrying 49 passengers in New Mexico.

State police confirmed there were “at least four fatalities” in the crash in McKinley County about 5am on Friday (1pm Thursday local time) but that figure was revised several hours later after another three people lost their lives.

Police said 43 passengers were taken to nearby hospitals, several in a critical condition after the crash, which scattered debris across the freeway.

“We do expect that number to rise,” New Mexico State Police spokesman Officer Ray Wilson said shortly after the crash.

He said out of the 49 passengers, only six received minor injuries.

“Many bus passengers were transported with serious injuries. The exact number of injuries is still being investigated,” police said.

Footage showed the front end of the Greyhound bus in pieces, and the semi-trailer truck overturned and its contents spilled over the Interstate 40 near Thoreau, northwest of Albuquerque.

The National Transportation Safety Board said it was sending 10 investigators to the site.

Preliminary crash information indicated the truck had a tyre blowout and crossed into oncoming traffic before colliding with a Greyhound bus, police said.

According to Greyhound’s tracking system, the bus originated from St Louis and was heading towards Los Angeles.

Gallup Indian Medical Center told US media that it was treating up to 42 patients with injuries, some of which are said to be critical.

“I was talking to the driver of the tractor trailer and when I flagged what happened and talked to the driver, he said his front drive tyre popped on him and so it took him into the medium onto oncoming traffic right into the Greyhound upon impact,” he said.

Officer Wilson said he was unsure of what the cargo was on board the semi-trailer, but told reporters there were a lot of vegetables at the crash site.