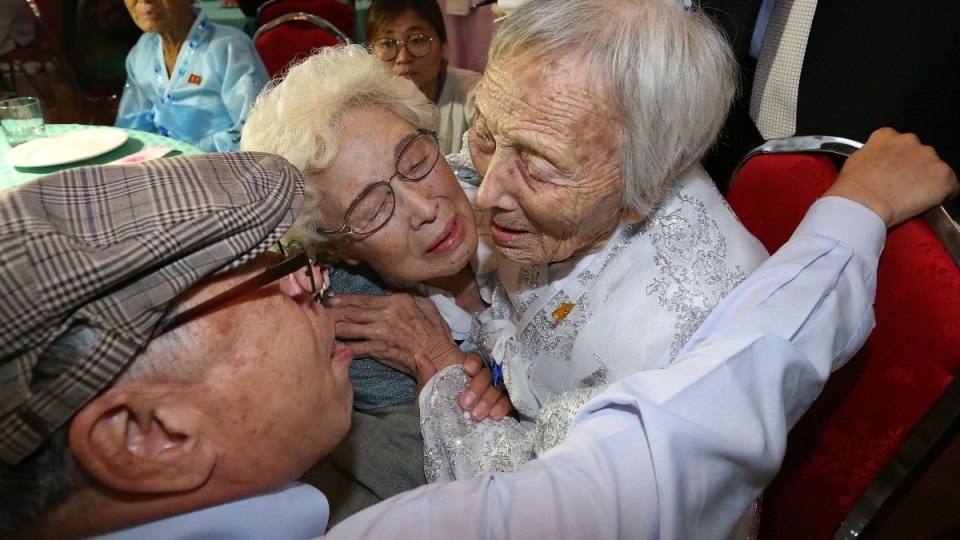 For many of the relatives, the brief meetings will be their last. photo: Getty

About 90 families from North and South Korea have wept and embraced as the divided peninsula held its first reunions in three years for relatives wrenched apart by the Korean War.

In what are expected to be the last and only time many of the families were allowed to see each other for brief visits as family members struggled to recognise relatives they had not glimpsed in more than 60 years.

Eighty-six-year-old Cho Hye-do and her brother Cho Do-jae, 75, were reunited with their older sister Cho Sun-do, who is 89 and lives in North Korea.

“I remember how beautiful you were,” Cho Hye-do told her big sister.

“I finally get to meet you after living for so long,” Cho Sun-do replied.

About 330 South Koreans from 89 families, many in wheelchairs, embraced 185 separated relatives from the North with tears, joy and disbelief.

The reunions are set to total up to just 11 hours over the next three days in the North Korean tourist resort of Mount Kumgang after North Korean leader Kim Jong-un and South Korean President Moon Jae-in agreed to the meetings at a summit in April.

“How are you so old?” Kim Dal-in, 92, asked his sister, Yu Dok, after gazing at her briefly in silence.

“I’ve lived this long to meet you,” replied the 85-year-old, wiping away tears as she clasped a photograph of her brother in his youth.

“When I fled home in the war…,” Han said, faltering as she choked with emotion and left her sentence incomplete.

The separated families are victims of a decades-long political gridlock since the 1950-53 war ended in a truce rather than a peace treaty, with ties increasingly strained as Pyongyang rapidly stepped up its weapons programs.

More than 57,000 South Korean survivors have registered for the family reunions, which usually end in painful farewells.

The reunions should be scaled up sharply, held regularly, and include exchanges of visits and letters, said Mr Moon, himself a member of a separated family from the North’s eastern port city of Hungnam.

“It is a shame for both governments that many of the families have passed away without knowing whether their lost relatives were alive,” he told presidential secretaries at a meeting.

The reunions, which began in 1985, can be a traumatic experience, say survivors, who know they are unlikely to see their relatives again, since many are 80 or older and first-timers typically get priority for visits.

Joy and grief as Korean families are reunited