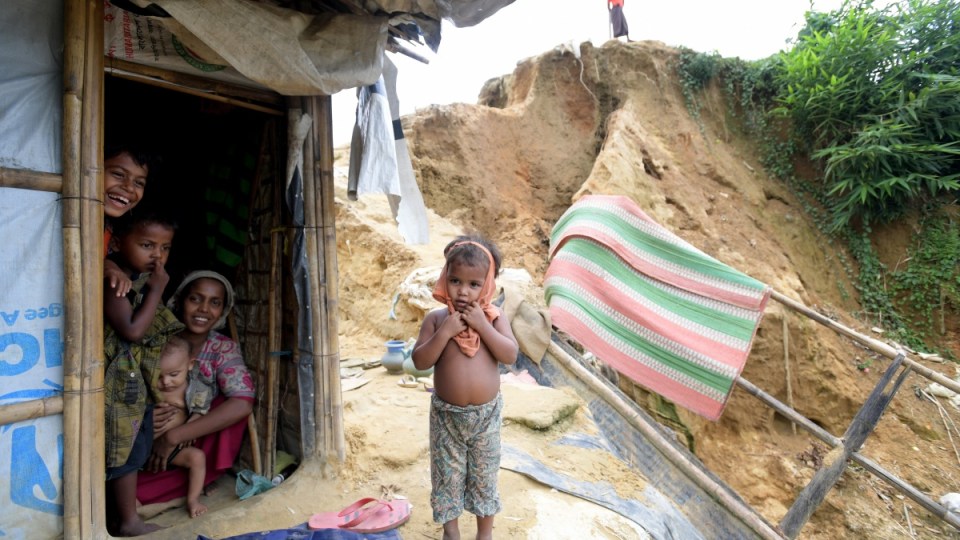 Shehena, 2, stands in front of the Begum family home. They smile despite loosing their previous bamboo and tarpaulin hut in a landslide. Photo: Tracey Nearmy

But in the Rohingya refugee camps in Bangladesh, lofty locations can mean dicing with death.

Since August 25 last year, more than 720,000 Rohingya people fled across the border escaping a military crackdown in Myanmar. Entire villages were destroyed, women were gang raped, babies were thrown into fire and an estimated 9000 to 13,700 people were murdered.

The United Nations considers the situation a “textbook case of ethnic cleansing”.

On the cusp of the first anniversary of the humanitarian crisis, the weather has been serving up more tests of survival.

Monsoon rains are bearing down on the tent cities, near the tourist town of Cox’s Bazar.

Tens of thousands of families have built bamboo and tarp huts that are perched precariously on the side of sandcastle-like hills.

On the day The New Daily visits a camp near Teknaf, the southern-most tip of Bangladesh, a naked toddler with a tubby tummy is frantically charging down a hill with an enthusiastic welcome: “Hello, hello, hello, hello”.

A fortnight ago, the same little girl, was buried alive after a mudslide sent her family’s hut toppling five metres down an embankment.

The family of eight was inside the tent at the time, which has since been rebuilt on a neighbouring site.

The toddler’s mother Begum, 25, said the lucky escape continues to play on her and her husband’s minds.

“I’m worried about it happening again,” she told The New Daily through a translator.

“Our hut isn’t very sturdy and during strong winds it shakes very hard. I’m afraid there will be another mudslide that buries our house again.”

Not the scene of Hollywood’s movies

Not the sequence of the bestselling novelist’s fiction

A million of #Rohingya refugees’ life situation in face of monsoon in the world’s largest settlement in Cox’s Bazaar, Bangladesh pic.twitter.com/IPAbcbSa0G

The incident has also had a traumatic impact on her six kids.

“When it’s raining in the middle of the night, they wake up crying and have frequent nightmares,” she said.

Other families haven’t been so fortunate. At least three refugees, including a three-year-old, have been killed as a result of the torrential rains and landslides since May.

And five Bangladeshi children from communities neighbouring the refugee camps were also killed in landslides.

Part of the problem is that makeshift shelters in the camps have been built on cleared jungle land and there is no longer any vegetation to hold the sandy ground together.

During downpours, it feels like it’s raining bullets in the camps. Large caramel pools quickly form and the deluge sometimes disrupts food distributions and floods medical clinics and learning centres.

According to the International Organisation for Migration’s incident database, there have been 297 landslides in the refugee camps since April.

The United Nations refugee agency estimates that 41,700 people are at high risk of landslides, and so far roughly half have been relocated elsewhere.

One of the biggest issues for aid groups in the field is getting access to more land for relocations and sometimes convincing reluctant families to shift to safer ground.

All year, agencies have been scrambling to upgrade shelters, roads and bridges and put in drains within the camps ready to withstand extreme weather.

“We’ve also gotten lucky. It’s not over yet, but so far so good,” he told The New Daily.

As well as threatening homes, the big wet also increases the risk of disease outbreaks from contaminated water.

The sodden conditions have also had an impact on maternal healthcare, in some cases restricting pregnant mothers’ access to medical assistance when they go into labour.

The monsoon period is expected to end by late August, but the camps could be in for another drenching in October when cyclone season begins.

It’s doubtful, the flimsy shelters will be able to withstand category-one gales of 90-125kmh, let alone cyclones that are even stronger.

To donate to the Save the Children’s Rohingya Crisis Appeal phone 1800 760 011 or visit www.savethechildren.org.au/rohingya