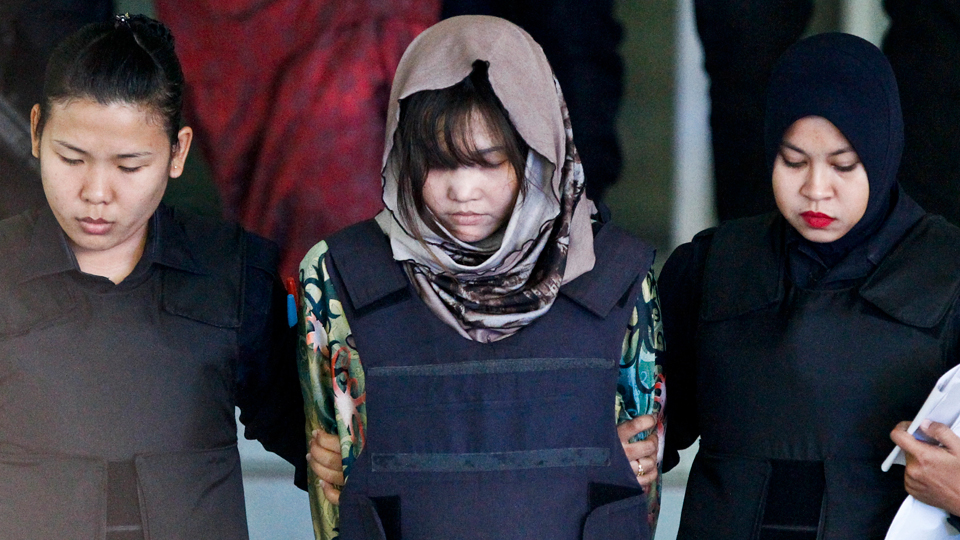 One of the accused, Doan Thi Huong, is escorted by police from a court hearing in Shah Alam, Malaysia. Photo: AAP

A Malaysian judge has ruled that two women charged with murdering North Korean leader Kim Jong-un’s half brother have a case to answer, meaning they must stand trial.

High Court Judge Azmi Ariffin said on Thursday it could be inferred from evidence presented in court that there was a “well-planned conspiracy” between the two women and four North Korean suspects still at large to kill Kim Jong-nam “systemically”.

He said he “cannot rule out that this could be a political assassination” but noted there was no concrete evidence to support this.

The judge called for the two women to enter their defence after reading his ruling for more than two hours. The defence phase of the trial is expected to last months.

The women have said they thought they were taking part in a prank for a TV show.

They are the only two suspects in custody and face the death penalty if convicted.

South Korean intelligence officers have alleged Mr Kim ordered the elimination of his elder half-brother. A US government source had also told news service Reuters that the US believes North Korean agents were behind the murder.

According to police reports at the time, Kim Jong-nam had been planning to travel to Macau when he fell ill. He was taken to an airport clinic and then transported to hospital. He reportedly died in the ambulance on the way to Putrajaya Hospital.

Kim Jong-nam was once heir-apparent to the world’s only communist dynasty, but he suffered a dramatic fall from grace and was forced into exile until the death of his father in 2011 – whereupon he went into hiding to evade a half-brother who feared he posed a threat to his own rule.

He had no political ambitions and preferred to travel, seemingly on forged passports from Portugal or the Dominican Republic. He used a Chinese alias, Pang Xiong, which means “fat bear” in Mandarin.

He fell out of favour with the regime after being caught trying to enter Japan on a false passport in 2001, saying he wanted to visit Tokyo Disneyland.

Kim Jong-nam reportedly left Macau in late 2012 after becoming concerned for his safety; a North Korean agent arrested in South Korea admitted during questioning that he had been tasked with assassinating Kim in July 2010 and there were reports of a failed attempt on his life in the city shortly after the death of his father.

Kim Jong-nam later spent time in Singapore before being spotted in Malaysia in January 2014.

In his book Under the Loving Care of the Fatherly Leader, Bradley Martin wrote that Kim Jong-nam had visited Japan several times, and was a regular client in some of the bathhouses in the Yoshiwara red-light district of Tokyo.

In the book, Kim Jong-nam said he expected the regime of his half-brother to collapse because he was too young and inexperienced.

For the next several days, North Korea will mark the birthday of its late leader, Kim Jong-il.

The major holiday this Thursday is the Day of the Shining Star, which will be celebrated with figure skating and synchronised swimming exhibitions, fireworks and mass rallies.

Since taking power in late 2011, Kim Jong-un has executed or purged a slew of high-level government officials in what the South Korean government has described as a “reign of terror”.

The most spectacular was the 2013 execution by anti-aircraft fire of his uncle, Jang Song-thaek, once considered the country’s second-most-powerful man, for what the North alleged was treason.