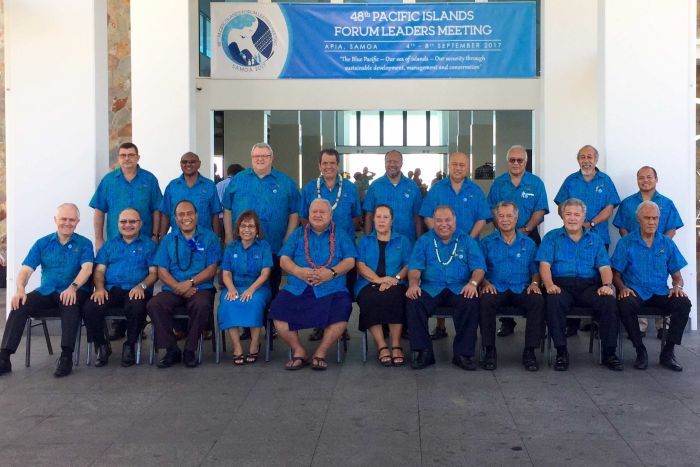 Tonga’s Prime Minister has suggested his Pacific counterparts should consider holding a year-long weight loss competition to set a good example for the region, which has some of the world’s highest rates of obesity and non-communicable diseases (NCDs).

Akilisi Pohiva told a local newspaper, The Samoa Observer, that he was proposing they tie the competition to an annual regional meeting, the Pacific Islands Forum, which is scheduled to next be held in Nauru in September.

Australian Prime Minister Malcolm Turnbull is expected to attend the meeting, as Australia is one of 18 member states.

“We should all get together for a weight loss competition; for an entire year, so when we meet the following year we will weigh in again and see who has lost the most,” he said.

“It is not about who loses the most kilos, but in order to shake off the weight, you must eat light and having that healthy mentality will go a long way.

“Once the leaders are adapting to that mindset they would be determined to get their people on the same aspect and go from there.”

Mr Pohiva’s comments came after a group of experts recommended regional leaders take serious action on childhood obesity, urging them to consider their recommendations at the upcoming Pacific Island Forum.

The forum’s specialist sub-committee on Regionalism cites recent figures from the World Health Organisation, which showed that as many as one in five children and teenagers in 10 Pacific countries were obese.

Pacific countries made up the top 10 in the world obesity rate rankings in 2016, according to the Central Intelligence Agency website.

“Building a Strong Pacific is the theme for this year’s Leaders Forum but that will be very difficult to do without dedicated regional action to fight childhood obesity,” Dame Meg Taylor, chair of the sub-committee, said in a statement.

“The sub-committee feel there is a need for action from the region’s leadership to address this.”

Australia is being left behind when it comes to tackling the obesity epidemic, health leaders warn.

Fiji National University (FNU) Associate Professor Pragya Singh, who is overseeing a pilot program that aims to prevent childhood obesity in the Pacific, said studies showed that 40 to 70 per cent of children who are obese today would become an obese adult.

“Apart from this, we are seeing the trends are increasing … this is the magnitude of the problem,” she said.

Colin Tukuitonga, director general of the Pacific Community organisation, said there was “very good evidence” that NCDs such as diabetes and heart diseases were a relatively recent phenomenon in the Pacific.

“In fact there was some studies that linked to the introduction of the refrigerator,” Dr Tukuitonga said.

And we do know it’s closely correlated with increasing consumptions of highly processed food and sugar-sweetened beverages.”

Soft drinks are popular in the Pacific, with many people consuming litres of them each day.

Up until a year ago, Samoan Betty Pinati drank at least 4 litres daily.

“I thought if I drink this kind of soft drink I would look like a millionaire in the eyes of other people,” the 29-year-old said.

“In Samoa, people think that that lady [who] is drinking soft drinks is rich in the eyes of people … but we didn’t look at the other way around that it affected our bodies and our healthy lifestyle.”

Ms Pinati said a big part of the appeal was that soft drinks were often cheaper to buy than water.

In a bid to tackle rising obesity Samoa and several of its Pacific neighbours have introduced a sugar tax, but Dr Tukuitonga said there was evidence big corporations planned to lobby against those efforts.

Without a doubt there will be studies, not directly by the industry, but through groups supported by industry that would continue try create doubt in the minds of policy makers, that taxes on soft drinks work,” he said.

The global giant Coca-Cola did confirm to the ABC that a recently advertised marketing role based in New Zealand, was “in line with our approach that beverage taxes have been shown to be ineffective as a means of combating obesity.”

But the company also said that it was committed to the health and wellbeing of Pasifika communities and had recently launched a low-sugar option for some of its products in Samoa.

But regardless, Ms Pinati has stopped consuming soft drinks.

She said she had not only lost 70 kilograms – from 178 to 107 kilograms – in the past year, but her health has improved significantly.

“[Before] I couldn’t breath normally and was easily affected by viral diseases like cold and flu and dengue fever,” she said.

“My diabetes, my cholesterol, my blood pressure is all normally function now,” she said.