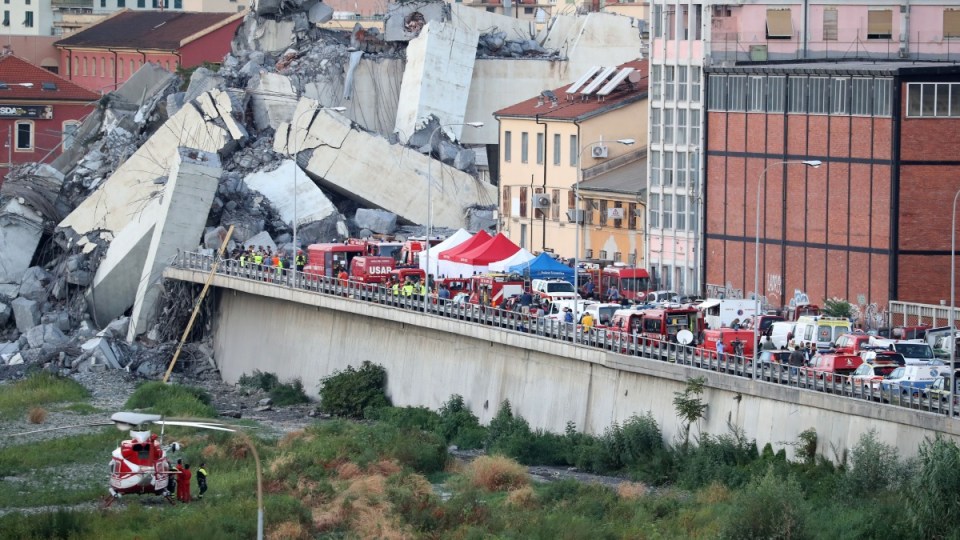 The rescue operation at the stricken Morandi bridge, where 26 people are already confirmed dead. Photo: Getty

An Italian footballer has told of his terror as the doomed Genoa motorway bridge collapsed beneath him while he drove over it on Tuesday.

Former goalkeeper Davide Capello, 33, told local media he thought he was going to die as the road disappeared in front of him, sending his car plummeting to the ground.

“I was convinced it was going to end badly,” he said. “But, thank God, I’ve lived to tell the tale.”

Mr Capello, who used to play for amateur side Legino and is now a firefighter, said: “It’s incredible that I’m still alive. It’s a miracle.”

Already, 35 people have been confirmed dead in the tragedy in Italy. The toll is expected to rise as more bodies are recovered from the rubble beneath the stricken stretch of motorway.

The cause of the collapse is not known, but experts say a fatal flaw in the 50-year-old Morandi bridge’s construction or wear and tear might be responsible for the collapse.

An 80-metre section of the bridge and one set of its supports crashed onto the roof of a factory and other buildings during a violent storm about 11.30am on Tuesday (local time).

Vehicles below were crushed and huge slabs of reinforced concrete plunged into a nearby riverbed. Dozens of cars and trucks plummeted up to 90 metres from the elevated motorway.

In 2016, Antonio Brencich, an associate professor of civil engineering at the University of Genoa, warned of problems with the Morandi bridge. He told an Italian TV channel that it would cost more to repair the “uneven” construction than just to knock the bridge down.

“The Morandi Bridge is referred to as a masterpiece of engineering. In reality, it is a bankruptcy,” he said. “That bridge is wrong. Sooner or later it will have to be replaced. I do not know when.

“But there will be a time when maintenance costs will exceed those of reconstruction, and then we will have to proceed with the replacement.”

Mr Capello said his only warning of the impending collapse was a noise, and then the bridge fell.

“My car fell 30 metres and got stuck in the rubble,” he said. “Some people helped me to get out.

“I still don’t understand how my car wasn’t crushed. It was shocking.

“It’s incredible that I’m still alive. It’s a miracle – I don’t have a single scratch.”

On Wednesday, a large-scale rescue operation, including sniffer dogs, was searching under the tonnes of concrete and metal rubble in the industrial area, railway track and the river where much of the bridge landed.

Italy’s Deputy Prime Minister, Matteo Salvini, has vowed to make those responsible for the disaster pay.