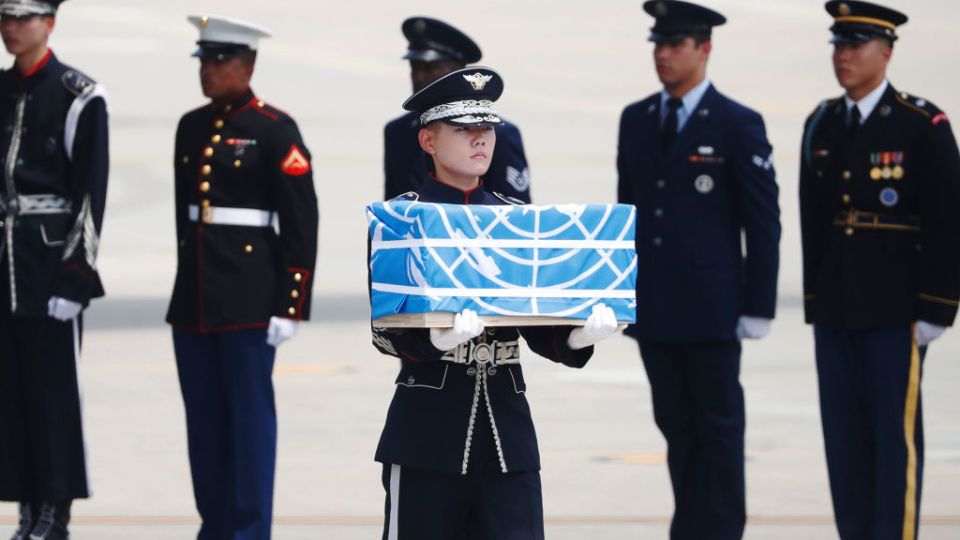 A soldier at Osan Air Base carries a casket containing the remains of a US soldier killed during the Korean War. Photo: Getty

Among the first steps in implementing an agreement reached at the historic June summit between North Korea and the US, North Korea has handed over 55 boxes containing the remains of US Korean War soldiers.

A US military transport plane flew to an airfield in North Korea’s northeastern city of Wonsan on Friday (local time) to bring the remains to Osan Air Base in South Korea.

At Osan, soldiers in dress uniforms with white gloves slowly carried the 55 cases to vans waiting on the tarmac.

The pledge at the summit and follow-up commitment to repatriate the soldiers is a sign North Korean leader Kim Jong-un will make progress in further talks on denuclearisation.

The handover of the boxes containing the remains of US soldiers killed in the 1950-53 Korean War represents a modest diplomatic triumph for US President Donald Trump .

At an event at the White House, Mr Trump thanked “Chairman Kim for keeping his word”.

“At this moment a plane is carrying the remains of some great fallen heroes from America back from the Korean War,” Mr Trump said.

The Remains of American Servicemen will soon be leaving North Korea and heading to the United States! After so many years, this will be a great moment for so many families. Thank you to Kim Jong Un.

The transfer of the remains coincided with the 65th anniversary of the 1953 armistice that ended fighting between North Korean and Chinese forces and South Korean and US-led forces under the UN Command.

The two sides remain technically at war because a peace treaty was never signed.

More than 7700 US troops who fought in the Korean War remain unaccounted for, with about 5300 of those lost in what is now North Korea.

As the son of a Korean War combat veteran, Vice President Mike Pence will “receive the remains as they return to American soil” when they are delivered to Hawaii for processing on August 1.

He said in a tweet that he was humbled to be part of the historic repatriation of remains and that it was deeply meaningful to the families who had lost loved ones.

.@POTUS asked that I travel to Hawaii to receive the remains of our US service members who fell in the Korean War. As the son of a Korean War combat veteran, it’s deeply humbling to be part of this historic moment. We’ll never forget the sacrifices of these brave service members. pic.twitter.com/Lmddn0C4GS

In a statement on the remains handover, the White House said it was “encouraged by North Korea’s actions and the momentum for positive change,” while South Korea called it “meaningful progress that could contribute to fostering trust” between Pyongyang and Washington.

Defence Secretary Jim Mattis said on Friday that the US military was “absolutely” considering the possibility of sending personnel to North Korea for this purpose, adding the handover set a positive tone for broader diplomatic negotiations.