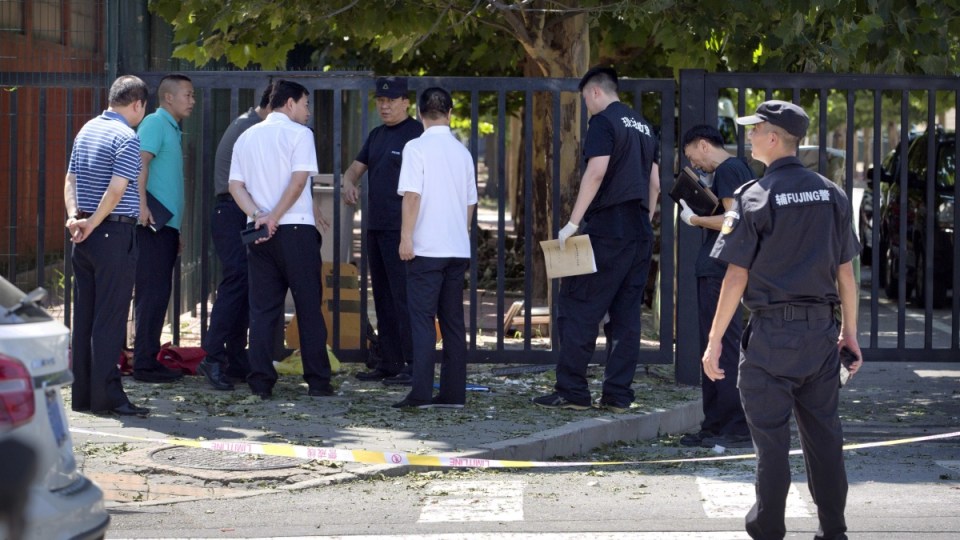 Officials stand near the site of reported blast just south of the US Embassy on Thursday. Photo: AAP

A suspected “firework device” is being blamed for an explosion outside the US embassy in Beijing, wounding a 26-year-old male suspect and no one else, police say.

The embassy, in a separate statement on Thursday, described the device as a bomb.

It said police had responded but did not offer further details.

Police said only the suspect was wounded, suffering an injury to his hand.

Earlier reports by official Chinese media said that a woman was detained after spraying gasoline on herself.

Photos posted on Twitter on Thursday showed a large amount of smoke and what appeared to be police vehicles surrounding the vast structure in northeastern Beijing around 1.45pm local time (3.45pm AEST).

But apart from a heightened security presence, traffic and ordinary life appeared to be proceeding as usual at 2.30pm.

Police did not immediately respond to requests for comment on the incident and an embassy spokesman said he was still collecting information.

The ruling Communist Party newspaper Global Times said police “took away a woman spraying gasoline on herself in suspected attempt at self-immolation”.

China and the US are in the middle of a trade dispute but America remains a hugely popular destination for travel, education and immigration for Chinese citizens.

Initially there were reports of an explosion outside the US embassy in Beijing.

Local media had reported that a man attempted to throw a home-made bomb into the gated area, but it exploded before it cleared the fence.

The embassy, in the Chaoyang District, is near other embassies, including India.

The New York Times reported that smoke filled the air in an area where many Chinese citizens line up each day to apply for visas.

Smoke engulfs US Embassy in Beijing amid reports of blast, self-immolation