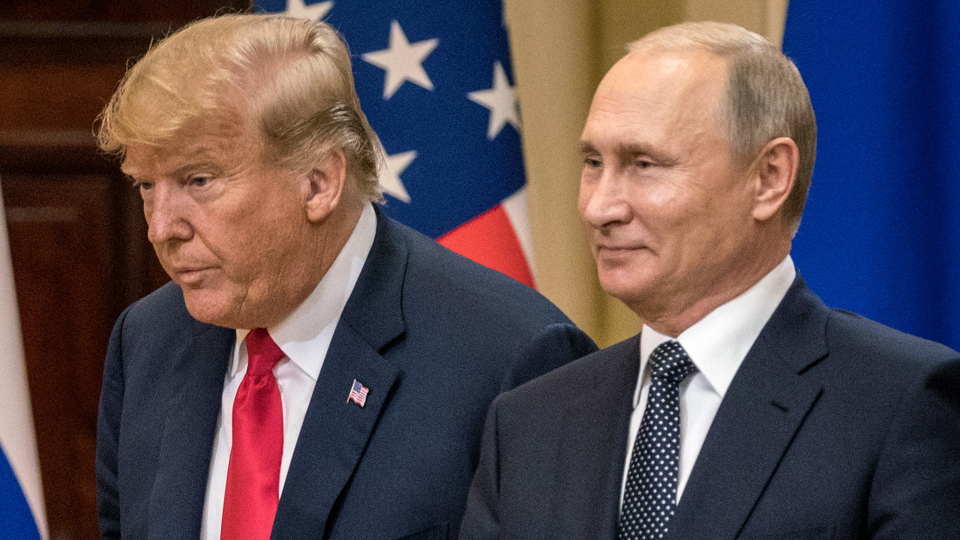 Amid the furore over Donald Trump’s public comments on Russia, there are darker rumblings about what he may promised to Vladimir Putin privately.

Publicly, there is yet more feuding over rhetoric.

Mr Trump replied “No” when asked on Wednesday by a journalist if Russia was still targeting the US. His spokeswoman tried to claim that was a “no” to further questions on Russia, not a response to the question itself.

Asked in a later interview whether he held Mr Putin personally responsible for meddling in the 2016 election, Mr Trump said he did.

“Well, I would, because he’s in charge of the country. Just like I consider myself to be responsible for things that happen in this country.”

Asked by @jeffglor if he holds Putin responsible for election meddling, President Trump said: "I would, because he's in charge of the country" https://t.co/jJcmwICGFB pic.twitter.com/DAXdKd8TjH

But these rhetorical backflips and sidesteps may yet be overshadowed by fears of concessions made in private by Mr Trump to the Russian President.

The two leaders reportedly spoke for over two hours in Helsinki, with only interpreters present.

Details of alleged agreements made during this meeting have been hinted at by Russian officials.

“I believe that important verbal agreements were made,” Russia’s ambassador to the US, Anatoly Antonov, said on Russian TV on Wednesday night (Russian time).

Perhaps most notable, the Russian ambassador reportedly alluded to “specific and interesting proposals to Washington” on the civil war in Syria.

These hints have left senior US officials “scrambling” as they have no information on the possible proposals or deals, The Washington Post reported.

Mr Trump has since boasted of “significant progress”, contradicting White House officials, who had described the outcomes in far more modest terms.

The question circulating in the US press: Is Mr Trump simply talking up the meeting, or did he actually make “significant” promises in secret?

Democrats have floated the unprecedented move of calling Mr Trump’s interpreter before Congress to give testimony on what was discussed with Mr Putin.

Mr Trump’s refusal to allow note takers and other officials into his private meetings with world leaders – including Mr Putin and North Korea’s Kim Jong-un – has prompted at least one resignation.

Beck Dorey-Stein, a stenographer for the White House during the Obama administration, told CNN on Thursday she resigned after Mr Trump took office because she felt he “was lying to the American people” by shunning note takers.

“I quit because I couldn’t be proud of where I worked anymore,” Ms Dorey-Stein said.

“I felt like President Trump was lying to the American people, and also … not even trying to tell the truth.

“He wasn’t even going the extra mile to have the stenographers in the room.”

What did Trump promise? Fear of ‘off the books’ deal with Putin